ANATOMY OF A SPERM

ANATOMY OF A SPERM

The mature spermatozoon is an elaborate, specialized cell produced in massive quantity, up to 1200 per second. Spermatogenesis begins when Type B spermatogonia divide mitotically to produce diploid primary spermatocytes (2n), which then duplicate their DNA during interphase. After a meiotic division, each daughter cell contains one partner of the homologous chromosome pair, and they are called secondary spermatocytes (2n). These cells rapidly enter a second meiotic division in which the chromatids then separate at the centromere to yield haploid early-round spermatids (n). Thus, theoretically, each primary spermatocyte yields four spermatids, although fewer actually result, as the complexity of meiosis is associated with germ cell loss.

The process by which spermatids become mature spermatozoa within the Sertoli cell takes several weeks and consists of several events: the acrosome is formed from the Golgi apparatus; a ﬂagellum is constructed from the centriole; mitochondria reorganize around the midpiece; the nucleus is compacted to about 10% of its former size; and residual cell cytoplasm is eliminated. With completion of spermatid elongation, the Sertoli cell cytoplasm retracts around the developing sperm, stripping it of unnecessary cytoplasm and extruding the sperm into the tubule lumen. The mature sperm has remarkably little cytoplasm. 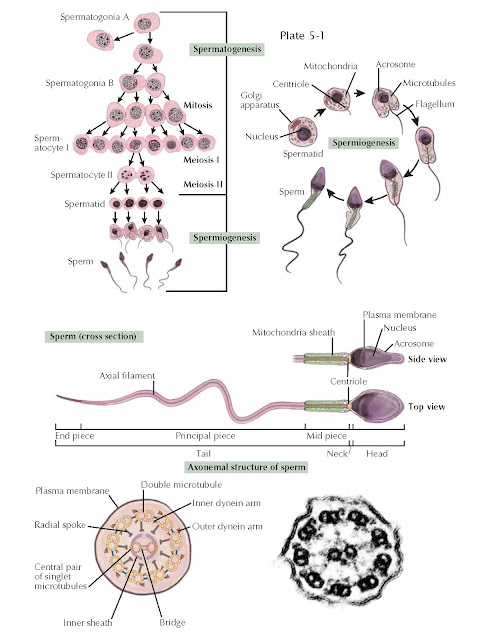 The human spermatozoon is approximately 60 µm in length and is divided into three anatomic sections: head, neck, and tail. The oval sperm head, about 4.5 µm long and 3 m wide, consists of a nucleus containing highly compacted chromatin, and an acrosome, a membrane bound organelle harboring the enzymes required for penetration of the outer vestments of the egg before fertilization. The sperm neck maintains the connection between the sperm head and tail. It consists of the connecting piece and proximal centriole. The axonemal complex extends from the proximal centriole through the sperm tail. The tail harbors the midpiece, principal piece, and endpiece. The midpiece is 7 to 8 µm long and is the most proximal segment of the tail, terminating in the annulus. It contains the axoneme, which is the 9 +2 microtubule arrangement, and surrounding outer dense ﬁbers. It also contains the mitochondrial sheath helically arranged around the outer dense ﬁbers. The outer dense ﬁbers, rich in disulﬁde bonds, are not contractile proteins but are thought to provide the sperm tail with the elastic rigidity necessary for progressive motility. Similar in structure to the midpiece, the principal piece has several columns of outer dense ﬁbers that are replaced by the ﬁbrous sheath. The ﬁbrous sheath consists of longitudinal columns and transverse ribs. The sperm terminates in the endpiece, the most distal segment of sperm tail, which contains axonemal structures and the ﬁbrous sheath. Except for the end-piece region, the spermatozoon is enveloped by a highly specialized plasma membrane that regulates the trans-membrane movement of ions and other molecules.

The spermatozoon is a remarkably complex metabolic and genetic machine. The 75 mitochondria that surround the axoneme contain enzymes required for oxidative metabolism and produce adenosine triphosphate (ATP), the primary energy molecule for the cell. Mitochondria are semiautonomous organelles that produce cellular energy and can also cause apoptotic cell death through the release of cytochrome c. Mitochondria are composed of double (outer and inner) membranes. Five distinct respiratory chain complexes span the width of the inner membrane and are necessary for oxidative phosphorylation: the NADPH dehydrogenase, succinate dehydrogenase, cytochrome bc1, cytochrome c oxidase, and ATP synthase complexes. The sperm axoneme contains enzymes and structural proteins necessary for the chemical transduction of ATP into mechanical movement. The plasma membrane covering the sperm-head region harbors specialized proteins that participate in sperm–egg interaction.

The axoneme is the true motor assembly and requires 200 to 300 proteins to function. Among these, the microtubules are the best-understood components. Sperm microtubules are arranged in the classic “9+2” pattern of 9 outer doublets encircling an inner central doublet. The protein dynein extends from one microtubule doublet to the adjacent doublet and forms both the inner and outer “arms” of the axoneme. Sperm with outer arm mutants have reduced motility and those with inner arm mutants have no motility. Radial links or spokes connect a microtubule of each doublet to the central inner doublet and consist of a complex of proteins. Tektins are proteins associated with the outer microtubular doublets, and nexin links are proteins that connect the outer doublets to each other and maintain the cylindrical axonemal shape.