Although not a true measure of fertility, the semen analysis, if abnormal, suggests that the probability of achieving fertility is lower than normal. For a male infertility evaluation, two semen analyses, performed with 2 to 3 days of sexual abstinence, are sought due to the large biologic variability in semen quality. Lubricants should be avoided and the specimen kept at body temperature during transport.

Normal values have been deﬁned for the human semen analysis by expert consensus (World Health Organization). Fresh semen is a coagulum that liqueﬁes from 5 to 30 min after ejaculation. After liquefaction, semen viscosity is measured and should not show any stranding. Ejaculate volume should be at least 1.5 mL, as smaller volumes may not sufﬁciently buffer against vaginal acidity. Although most commonly a consequence of collection error, low ejaculate volume may also indicate retrograde ejaculation, ejaculatory duct obstruction, or androgen deﬁciency. Sperm concentration should be 20 million sperm/mL. Reasons for low sperm concentrations can include medications, exposures, systemic disease, hormonal disorders, varicocele, unilateral blockage, and genetic syndromes. Sperm motility is assessed in two ways: the proportion of all sperm that are moving and the quality of sperm movement. A normal value for sperm motility is 50% motile along with an average quality or progression score. The causes of low sperm motility, the most common semen analysis ﬁnding, are myriad and often reversible. 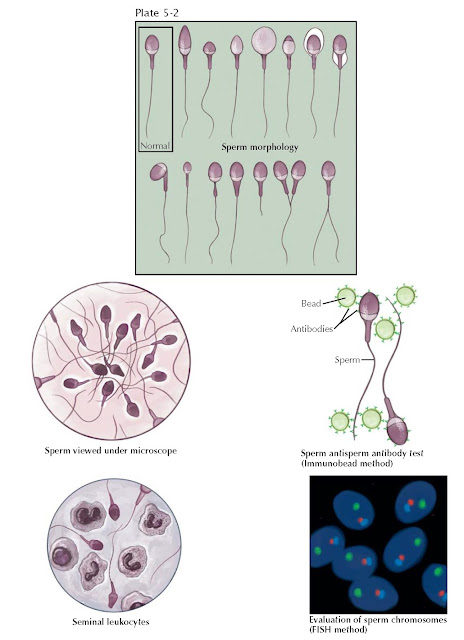 Recently, however, there has been debate concerning precisely which semen analysis values are to be considered “normal,” as controlled studies of fertile and infertile couples suggested other thresholds may be more appropriate, and sperm production is known to be susceptible to wide individual, geographic, and seasonal variation. When assessing semen quality, it is important to realize that spermatogenesis takes 60 to 80 days to complete, so that an individual semen analysis reﬂects biologic inﬂuences occurring 2 to 3 months prior. Like-wise, medical or surgical therapy directed at improving semen quality will take several months to become manifest in improved semen quality.

The formal evaluation of sperm shape is termed morphologic assessment. Several descriptive systems exist to evaluate morphology, and within each system, sperm are designated normal or abnormal based on speciﬁc size criteria. Although it is essentially judging a book by its cover, since the late 1980s it has been believed that sperm morphology may correlate with a man’s fertility potential as reﬂected by in vitro fertilization (IVF). In general, the percentage of sperm with normal morphology has the greatest discriminatory power among all descriptors of semen quality in distinguishing fertile from infertile semen, although no particular value is diagnostic of fertility. Sperm morphology can be altered by toxic and occupational exposures, varicocele, fevers, medications, and systemic disease. It appears that sperm morphology is a sensitive indicator of overall testicular health, because the sperm morphologic characteristics are determined during spermatogenesis.

Other fertility assays can evaluate whether the seminal environment is abnormal, which may contribute to male infertility. Two such tests include an evaluation for excessive semen leukocytes (leukocytospermia) and testing for antisperm antibodies that can inhibit sperm transport through the female reproductive tract and impair sperm–egg interaction at fertilization. Sperm genetics can also be directly assessed for chromosomal normalcy with in situ hybridization techniques. These tests can complement the routine semen analysis in the male evaluation and better estimate the chances of fertility.