It is thought that a signiﬁcant proportion of male infertility is due to underlying genetic causes. Currently, genetic testing for male infertility is based mainly on abnormalities of sperm concentration. However, it is clear that the epididymis plays a large role in the development of sperm motility and that 200 to 300 genes control sperm motility. Thus, as our knowledge of genomics develops, genetic testing for abnormal motility will also become routine in the future.

Genetic defects are generally divided into three categories. The simplest are point mutations in single genes that follow the rules of mendelian genetics. The second category of genetic defects are the chromosomal disorders in which changes in whole segments of chromosomes occur that are classiﬁed as either structural or numerical in type. As a consequence of structural defects, there is a loss (deletion), gain (duplication), or exchange (balanced defect) of genetic material. Numerical chromosomal defects result in extra or missing chromosomes. The third category is polygenic or multifactorial genetic defects. These are the most common defects and include most disorders of human biology. A fourth, rare category of mutations exists, termed mitochondrial disorders, consisting of mutations in nonchromosomal DNA within these subcellular organelles. 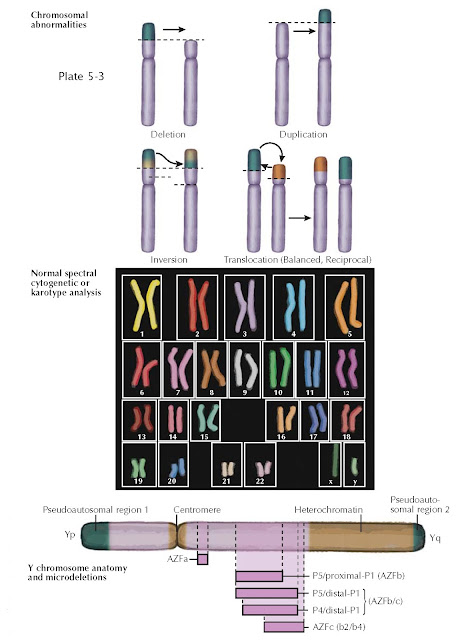 From 2% to 15% of infertile men with azoospermia (no sperm count) or severe oligospermia (low sperm counts) harbor a chromosomal abnormality on either the sex chromosomes or autosomes. A blood test for cytogenetic analysis (karyotype) can determine if such a genetic anomaly is present. Patients at risk for abnormal cytogenetic ﬁndings include men with small, atrophic testes, elevated follicle-stimulating hormone (FSH, see Plate 1-4) values, and azoospermia. Klinefelter syndrome (47,XXY) is the most frequently detected sex chromosomal abnormality among infertile men (see Plate 1-7).

Other genetic causes of low sperm concentrations include XYY syndrome typically associated with tall stature, decreased intelligence, higher risk of leukemia, and aggressive, often antisocial behavior. Chromosomal translocations or inversions are also an infrequent cause of male infertility and low sperm counts. When segments of chromosomes are exchanged, a translocation results. When a chromosome breaks in two places and the material between the breakpoints reverses orientation, an inversion results. Such exchanges may either interrupt important genes at the breakpoint or interfere with normal chromosome pairing during meiosis because of imbalances in chromosomal mass. Many translocations have been associated with male infertility. In particular, reciprocal and robertsonian translocations (in which material from chromosomes 13, 14, 15, 21, and 22 are involved) are eightfold more common in infertile men than in normal males. In addition, syndromes such as myotonic dystrophy, Noonan syndrome, 46,XX male syndrome and mixed gonadal dysgenesis, sickle cell anemia, congenital adrenal hyperplasia, Kallmann syndrome (see Plate 3-17), Prader-Willi syndrome, and Kennedy disease are rare but well-described genetic causes of male infertility.

Before its ﬁrm association with male fertility, the Y chromosome was widely considered a genetic black hole, an evolved, broken remnant of the X chromosome. It was apparent that the Y harbored the male sex-determining region (testis-determining region, SRY ), but it was also home to gene regions that govern stature, tooth enamel, and hairy ears as well as “junk” genes. Now that the genome of the human Y is known, it is clear that this chromosome is structurally unique as a fertility chromosome. The postulation that deletions in the long arm of the Y chromosome cause azo- ospermia was made in 1976 and this theoretical region was termed the Azoospermia Factor (AZF). Currently, the positional patterns of deletions (termed microdeletions) in the AZF region are used to subdivide this region into AZFa, b, c subregions. As many as 7% of men with oligospermia and 15% of azoospermic men have small, underlying deletions in one or more gene regions on the long arm of the Y chromosome (Yq). Deletion of the DAZ (deleted in azoospermia) gene in the AZFc region is the most commonly observed microdeletion in infertile men. Fertility is possible in many men with these deletions with in vitro fertilization and intracytoplasmic sperm injection. A polymerase chain reaction–based blood test can examine the Y chromosome from peripheral leukocytes for these gene deletions and is recommended for men with low or no sperm counts and small, atrophic testes.