Excurrent ductal obstruction results in azoospermia from blockage of the ductal system after sperm exit the testicle. The posttesticular reproductive tract includes the epididymis, vas deferens, seminal vesicles, and associated ejaculatory apparatus (see Plate 3-3). Ductal obstruction can be due to congenital or acquired causes. In cases of idiopathic obstruction, 65% of blockages will be found in the epididymis, 30% in the vas deferens, and 5% at the level of the ejaculatory duct. Rarely, intratesticular obstruction of testis efferent ductules (see Plate 3-3) may occur.

The most common congenital cause of obstruction is cystic ﬁbrosis (CF) or its variant, congenital absence of the vas deferens (CAVD, see Plate 4-22). CF is the most common autosomal recessive genetic disorder in the United States and is fatal. Men with CF are missing parts of the mesonephric ducts that may include the epididymis, vas deferens, seminal vesicles, or ejaculatory ducts. CAVD, a “form fruste” of CF, may simply present as infertility and accounts for 1% to 2% of such cases. On examination, no palpable vas deferens is observed on one or both sides. As many as 80% of CAVD patients will harbor a detectable CF mutation. In addition, 15% will have renal malformations, most commonly unilateral agenesis. The diagnosis is made on physical examination and conﬁrmed by transrectal ultrasound (TRUS, see Plate 4-12) showing seminal vesicle, ampullary vas deferens, or ejaculatory duct agenesis or hypotrophy. Most cases are not microsurgically reconstructable, and sperm retrieval (see Plate 5-7) is required with assisted reproduction to conceive. 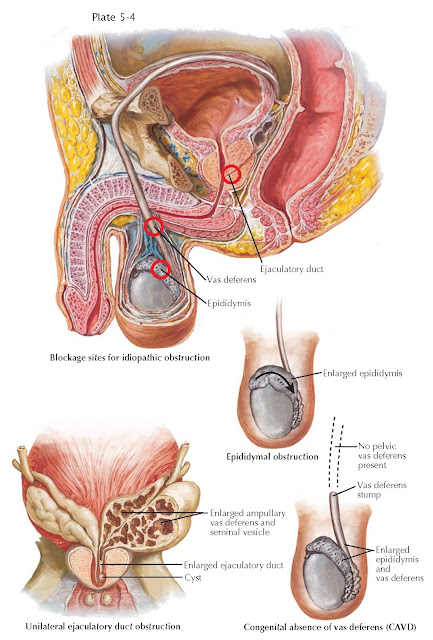 Idiopathic epididymal obstruction is a relatively uncommon condition found in otherwise healthy men. It may be linked to prior occult infection, but has also been shown to be related to CF in that one-third of affected men harbor CF gene mutations. It is often amenable to microsurgical reconstruction.

Young syndrome presents with a triad of chronic sinusitis, bronchiectasis, and obstructive azoospermia. The pathophysiology of the condition is unclear but may involve abnormal ciliary function or abnormal mucus quality, resulting in ﬂuid concretion and block- age in the ﬁne epididymal ducts. Spermatogenesis is usually normal, and microsurgical procedures can be performed to reestablish reproductive tract continuity. Adult polycystic kidney disease is an autosomal dominant disorder associated with numerous cysts of the kidney, liver, spleen, pancreas, epididymis, seminal vesicle, and testis. Disease onset usually occurs in the twenties or thirties with symptoms of abdominal pain, hypertension, and renal failure. Infertility is usually secondary to obstructing cysts in the epididymis or seminal vesicle, which may be amenable to microsurgery.

Ejaculatory duct obstruction involves blockage of the ejaculatory ducts—the delicate, paired, collagenous tubes that connect the vas deferens and seminal vesicles to the urethra. It is the cause of infertility in 5% of azoospermic men. It can be congenital, resulting from müllerian duct (utricular) cysts, wolfﬁan duct (diverticular) cysts, or congenital atresia or acquired from seminal vesicle calculi or postsurgical or inﬂammatory scar tissue. It presents as hematospermia, painful ejaculation, or infertility. The diagnosis is conﬁrmed by ﬁnding a low-volume ejaculate, and TRUS reveals dilated seminal vesicles or dilated ejaculatory ducts. Treatment with endoscopic unrooﬁng of the ejaculatory ducts can restore fertility and reduce symptoms (see Plate 5-9). A substantial proportion of idiopathic cases are associated with CF mutations.

The most common cause of acquired ductal obstruction is due to vasectomy. Vasectomies are performed on 1 to 3 million U.S. men annually for contraception, and approximately 5% of men desire to have the vasectomy reversed, most commonly because of remarriage. Groin and hernia surgery can result in inguinal vas deferens obstruction, especially in cases in which the Marlex mesh is used in repair. This is thought to be due to perivasal inﬂammation causing vasal obstruction. Bacterial infections such as tuberculosis, Escherichia coli (in men age 35), or Chlamydia trachomatis may involve the epididymis or vas deferens, with scarring and obstruction that may or may not be amenable to microsurgical repair. Commonly, a testis biopsy (see Plate 5-6) is needed to distinguish between a failure of sperm production and obstruction in azoospermic men. If normal, obstruction is conﬁrmed, and formal surgical investigation of the reproductive tract begins with a vasogram followed by microsurgical reconstruction.