The role of microsurgery in the treatment of male infertility is well established and cost-effective when compared to assisted reproduction, including in vitro fertilization and intracytoplasmic sperm injection. Surgery also attempts to reverse speciﬁc pathology and, as such, allows for conception at home rather than in the laboratory. The rise of microsurgery as a surgical discipline followed three advances: (1) reﬁnements in optical magniﬁcation, (2) the development of more precise microsuture and microneedles, and (3) the ability to manufacture smaller and more reﬁned surgical instruments. In urology, microsurgery was ﬁrst applied to renal transplantation and vasectomy reversal. Techniques evolved quickly from humble beginnings using borrowed forceps from the local jewelry store (the “jeweler’s forceps”) and using human hair for ﬁne suture material, to its current highly reﬁned state.

The most commonly performed microsurgical procedure in urology is vasectomy reversal. The most common reason for vasectomy reversal is remarriage and the desire for more children. Occasionally, an unfortunate individual will have chronic pain after vasectomy or have lost a child and desire another. Infection, congenital deformities, trauma, and previous surgery are less frequent indications for vasovasostomy or epididymovasostomy (see Plate 5-4). Reproductive tract obstruction is suspected in men with normal FSH and testosterone levels, normal testis size, and azoospermia. 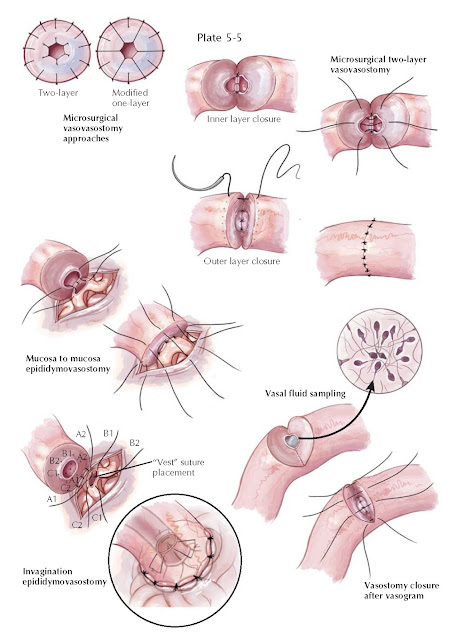 Vasal obstruction is generally corrected by vasovasostomy. Although there are several methods for performing vasovasostomy, including a modiﬁed single-layer anastomosis and a strict, two-layer anastomosis, neither is proven superior to the other. Importantly, optical magniﬁcation with an operating microscope improves outcomes as smaller sutures can be used, reducing cicatrix formation and failure rates. However, surgeon experience is the most critical factor for success. In the best hands, 95% to 99% of patients have a return of sperm after vasovasostomy.

At the time of vasectomy reversal, the vas deferens is transected below the vasectomy site. If the ﬂuid egressing from the vas deferens contains no sperm, a second acquired obstruction may exist in the delicate tubules of the epididymis. As more time passes after vasectomy, the greater will be the “back-pressure” behind the blocked vas deferens, causing a “blowout” at some point in the 18-foot-long microscopic epididymal tubule. A blowout results in blockage of the tubule as it heals. In this case, the abdominal vas deferens must be connected to the epididymis proximal to the blowout to bypass both sites of obstruction and to reestablish reproductive tract continuity in a procedure termed epididymovasostomy.

For epididymovasostomy, the epididymis is exposed by opening the tunica vaginalis that surrounds the testis. The epididymis is inspected and an individual tubule selected that appears dilated and is proximal to the obstruction. Two different approaches to epididymovasostomy are now popular: the mucosa-to-mucosa end-to-side method and the invagination approach. With the traditional mucosal approach, the opened epididymal tubule is connected to the cut end of the vas deferens, with four to six small microsutures placed radially around the circumference of each. This “inner” layer is buttressed with another, “outer” layer of radially placed microsutures to strengthen the delicate connection. With the invagination method, one, two, or three “vest” microsutures are placed near but not into the opening of the epididymal tubule to allow the epididymal tubule to be drawn into, or “invaginated” into, the lumen of the vas deferens, theoretically creating an improved water-tight seal. After epididymovasostomy, approximately 60% to 80% of men will have sperm in the ejaculate.