The evaluation of the infertile, azoospermic man involves a direct assessment of spermatogenesis. This provides deﬁnitive evidence of either obstructive or nonobstructive azoospermia. The testis biopsy is most commonly used to assess sperm production. The technique involves a small, open incision in the scrotal wall and testis tunica albuginea under local anesthesia. A small wedge of testis tissue is removed, examined histologically, and seminiferous tubule architecture and cellular composition are assessed (for patterns, see Plate 3-21). Alternatively, percutaneous sampling of testis tissue with a biopsy gun can be used, similar to that employed for prostate biopsy. Although several excellent descriptions of testis seminiferous epithelium histology have been reported, no individual classiﬁcation has been uniformly adopted as a standard approach.

A testis biopsy is not usually indicated for cases of oligospermia (low sperm count), as partial reproductive tract obstruction is very rare. In addition, although a single, unilateral testis will deﬁne excurrent ductal obstruction, the ﬁnding of two asymmetric testes may warrant bilateral testis biopsies to best deﬁne the pathology. 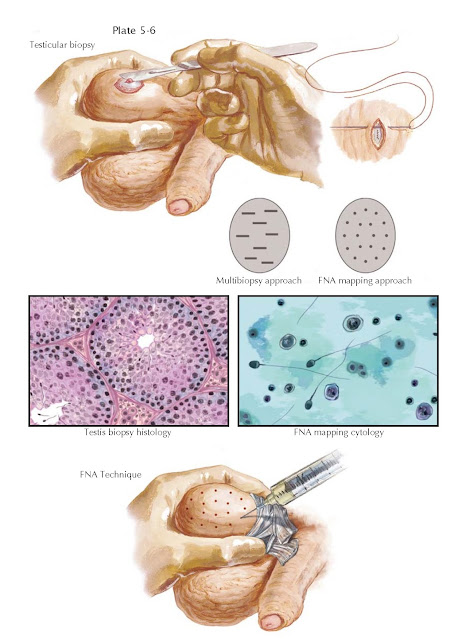 With normal sperm production, formal investigation of the reproductive tract for obstruction is warranted, beginning with a vasogram (see Plate 5-5). Abnormal sperm production deﬁnes the problem as nonobstructive azoospermia. The testis biopsy may also indicate the premalignant condition, intratubular germ cell neoplasia, that tends to occur globally within the affected testis. This condition exists in 5% of men with a contralateral germ cell testis tumor and is more prevalent in infertile than fertile men.

Since the advent of in vitro fertilization and intracytoplasmic sperm injection (IVF-ICSI), a relatively recent indication for testis biopsy is to determine whether or not men with nonobstructive azoospermia have mature sperm present in the testis that may be used for assisted reproduction. A single testis biopsy will detect the presence of sperm in 30% of men with nonobstructive azoospermia. Other surgical and non- surgical approaches have sought to improve the “yield” of sperm in cases of testis failure.

It is now clear that men with nonobstructive azoospermia can have “patchy” or “focal” areas of sperm production in a testis otherwise devoid of mature sperm. This has led to the development of more sophisticated approaches to testis biopsy, including multibiopsy techniques and percutaneous ﬁne-needle aspiration (FNA) testis “mapping.” As a single testis biopsy is subject to sampling error, the principle underlying these advanced approaches is to reduce this error by more intensive sampling. In return, sperm detection rates of 60% or more are obtained. With the multibiopsy method, four to six individual testis biopsies are taken from different areas of the testis to increase the odds of ﬁnding sperm in any particular tissue sample.

Similar to other “open” or percutaneous testis biopsy methods, ﬁne-needle aspiration mapping is performed under local anesthesia. Unlike these techniques, however, smaller tissue samples are obtained that are then examined cytologically instead of histologically. It is also a diagnostic procedure that creates a geographical “map” of the testis to justify future and potentially more invasive attempts at sperm retrieval. FNA mapping involves wrapping the testis and scrotal skin

with a gauze wrap posteriorly. The “testicular wrap” is a convenient handle to manipulate the testis and also ﬁxes the scrotal skin over the testis for the procedure. Percutaneous aspiration sites are marked on the scrotal skin, 5 mm apart, according to a template. The number of aspiration sites varies with testis size and ranges from 4 (to conﬁrm obstruction) to 15 per testis (for nonobstructive azoospermia). FNA is performed with a sharp-beveled, small-gauge needle using the established suction cutting technique. Precise, gentle in-and-out movements are used to aspirate tissue fragments. After aspiration, the tissue fragments are expelled onto a slide, gently smeared, and ﬁxed in 95% ethyl alcohol. Pressure is applied to each site for hemostasis and a routine Papanicolaou stain is performed and the slides read by a cytologist for the presence or absence of mature sperm with tails. If sperm are detected, then sperm retrieval can proceed at the time of IVF-ICSI with a very high possibility of ﬁnding sufﬁcient sperm for all oocytes retrieved.