Ejaculatory duct obstruction (EDO) underlies 1% to 5% of male infertility. Although originally described in azoospermic men with complete blockage, it is now clear that EDO is a more complex anatomic condition that can take several forms.

The ejaculatory ducts are paired, collagenous, tubes that commence at the junction of the ampullary vas deferens and seminal vesicle, course through the prostate, and empty into the prostatic urethra at the verumontanum. The duct has three regions: an extraprostatic portion, a middle intraprostatic segment, and a distal segment within the verumontanum. Ejaculatory continence is maintained, and urinary reﬂux prevented, by the acute angle of duct insertion into the urethra. 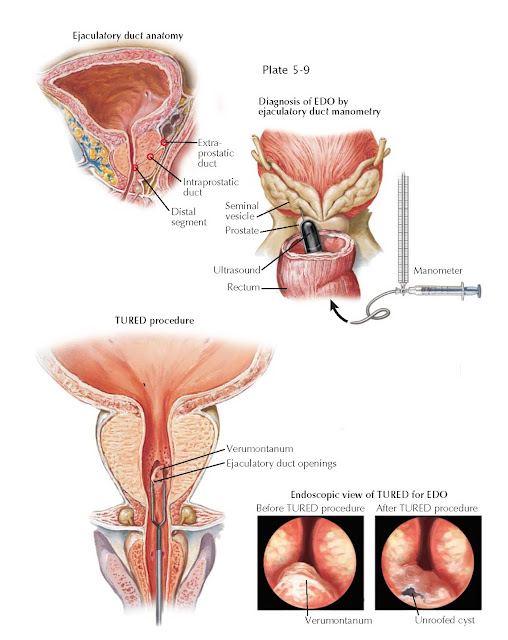 Physiologically, the relationship between the seminal vesicle and ejaculatory duct is similar to that of bladder and urethra. Just as bladder outlet obstruction can result from prostatic blockage, so too can physical blockage of the ejaculatory ducts cause EDO. By similar reasoning, “functional” or neurologic dysfunction of the seminal vesicle may be similar to voiding dysfunction due to bladder myopathy. At times, a “functional” issue can be mistaken for “physical” ejaculatory duct blockage, thus adding further complexity to the diagnosis of EDO.

Ejaculatory duct obstruction presents with infertility, postejaculatory pain, or hematospermia. Low-volume azoospermia deﬁnes complete or classic EDO and rep- resents the physical blockage of both ducts. Unilateral complete or bilateral partial physical obstruction results in incomplete or partial EDO. Both are associated with either one or more of low ejaculate volume, postejaculatory pain, or hematospermia. However, partial EDO is uniquely associated with oligoasthenospermia.

Procedures used to conﬁrm the diagnosis of EDO include seminal vesicle sperm aspiration (a normal seminal vesicle should not have sperm in it, unlike a blocked one), contrast seminovesiculography (injection of contrast in a manner similar to vasography to locate the obstruction), and seminal vesicle chromotubation (a variant of vesiculography in which dye is injected and ejaculatory duct patency assessed visually). A prospective study of these three techniques deemed patency with chromotubation the most accurate way to diagnose ejaculatory duct obstruction.

Because of the complexity of diagnosing partial EDO, testing has been developed that can differentiate physical from functional forms of EDO. Similar to the concept of urodynamics for bladder outlet obstruction, ejaculatory duct manometry measures the “opening pressures” of the ejaculatory duct, deﬁned as the pressure above which ﬂuid from the seminal vesicle that passes through the ejaculatory duct enters the prostatic urethra. Fertile patients have remarkably consistent and low opening pressures, deﬁned as 45 cm H2O, and infertile men with EDO have signiﬁcantly higher ED pressures. Based on the well-established pressure-ﬂow concept used to evaluate ureteropelvic junction and bladder outlet obstruction, diagnostic ED manometry can differentiate complete from partial, and physical from functional, forms of EDO.

Once EDO is conﬁrmed diagnostically, the treatment is transurethral resection of the ejaculatory ducts (TURED), performed in an outpatient setting under anesthesia. Similar to transurethral prostatic resection for benign prostatic hypertrophy (see Plate 4-17), the technique combines cystourethroscopy with resection of the verumontanum in the midline (for complete obstruction) or laterally (for unilateral obstruction) with cutting current. When performed correctly, cloudy, milky ﬂuid is usually seen reﬂuxing from the opened ducts. Postoperatively, a small Foley catheter is placed for 24 hours. Impressive and durable increases in semen quality are common after the procedure.