Sperm retrieval techniques collect sperm from organs within the male genital tract. Developed in 1985, ten years before the description of intracytoplasmic sperm injection (ICSI), sperm retrieval combined with in vitro fertilization (IVF) and ICSI allow severely infertile men the opportunity for fatherhood. Candidate organs for sperm retrieval include the vas deferens, epididymis, and testicle in obstructed men and the testis in nonobstructive azoospermic men. Although it is not difﬁcult to retrieve sperm from men with normal sperm production, it can be very difﬁcult to ﬁnd sperm in men with testicular failure and nonobstructive azoospermia. 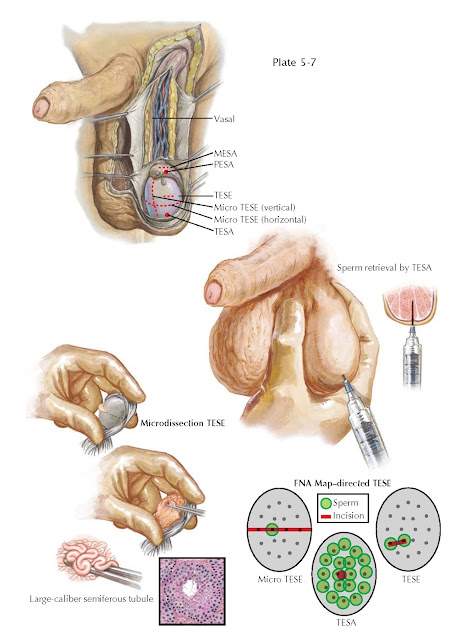 The newest of the three sperm aspiration techniques, testicular sperm retrieval, was ﬁrst reported in 1993, one year after ICSI. It demonstrated that sperm do not have to “mature” and pass through the epididymis to be able to fertilize an egg (with ICSI). Testicular sperm extraction is indicated for “obstructed” patients and is also useful for many men with nonobstructive azoospermia. In obstructed men, testis sperm can be retrieved by needle aspiration (TESA) or percutaneous or open surgical biopsy (TESE). TESA involves holding the testis with the epididymis located posteriorly followed by insertion of a hollow needle (16- to 23-gauge) into the testis through the stretched skin of the scrotum.

In men with nonobstructive azoospermia, testis biopsy (TESE) is usually needed to retrieve sufﬁcient sperm for IVF-ICSI. To improve the likelihood of ﬁnding sperm, a multibiopsy TESE has been described in which many biopsies are taken until enough sperm are obtained. A variant of multibiopsy TESE is microdissection TESE, which involves taking multiple testis biopsies through a large incision that exposes the entire testis parenchyma. With an operating microscope, the entire bed of testis tissue is examined for sperm-containing seminiferous tubules that are larger in diameter and more opaque, or whiter, than tubules without active spermatogenesis.

Fine-needle aspiration map-directed TESE employs a diagnostic mapping procedure (see Plate 5-6) to guide subsequent sperm retrieval for IVF-ICSI. Information obtained from the map “directs” the TESE, taking advantage of the a priori knowledge that sperm are present in nonobstructive azoospermic men before IVF-ICSI. Depending on the location, density, and quantity of sperm found on the map, sperm retrieval may involve TESA, TESE, or microdissection TESE. The ability to freeze and thaw retrieved sperm is a signiﬁcant advance in the care of azoospermic men. It simpliﬁes the timing and orchestration of fertility procedures, adds convenience to reproductive urologists’ schedules, and allows multiple opportunities to conceive with IVF-ICSI without repeating surgical sperm retrieval.