Although commonly viewed as a single event, ejaculation is actually two separate processes, termed emission and ejaculation. During emission, the semen is “loaded” into the prostatic urethral chamber. After this, ejaculation is the forcible expulsion of semen from the penis in a series of spurts caused by rhythmic contractions, about 1 second apart, of the pelvic muscles. Ejaculation is different from orgasm or climax, the latter being an event that is centered in the brain that is closely associated with ejaculation. 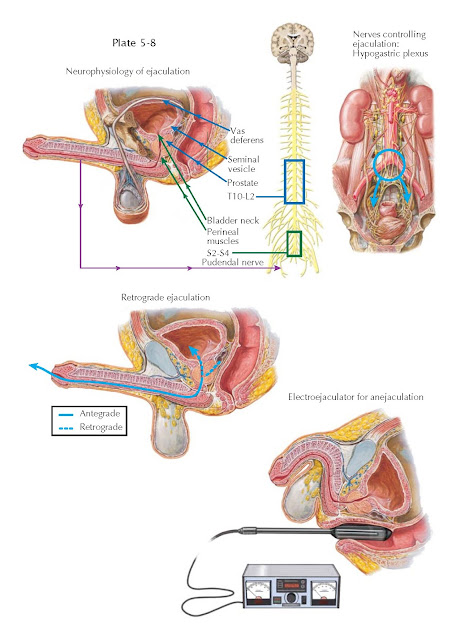 Retrograde ejaculation. This is a straightforward diagnosis that requires a history of aspermia, with a postejaculate urine sample showing sperm. Causes include medical conditions such as diabetes mellitus, multiple sclerosis, spinal cord injury, tethered spinal cord, spina biﬁda, medications such as alpha-blockers, tricyclic antidepressants and ﬁnasteride, and surgical procedures such as transurethral prostatic resection (TURP, see Plate 4-17), V-Y plasty of the bladder neck, rectal, anterior spinal and retroperitoneal procedures. The treatment of retrograde ejaculation depends on its cause. If drug-induced, then the offending medication should be discontinued. Oral therapy with alpha-agonist agents can help close the bladder neck and avoid entry of the semen into the bladder during ejaculation. Sperm can also be “harvested” from the bladder and used for fertility procedures if needed.

Anejaculation. This condition can be congenital or acquired. Congenital anorgasmia occurs in about 1/1000 men. Despite the lack of orgasm, nocturnal emissions during sleep may occur. Treatment of primary anejaculation is difﬁcult, as affected individuals often lack sensual awareness. Generally, treatment is sought when the couple desires a pregnancy, as erections and sexual performance are otherwise unaffected. Again, sex education has the highest chance of curing this problem. Fertility issues can be bypassed with one or more of the following techniques: prostatic massage for sperm, collection and insemination of nocturnal semen emissions, penile vibratory stimulation or rectal probe electroejaculation, or sperm retrieval (see Plate 5-7). Secondary or acquired anejaculation can be due to the same medications that cause retrograde ejaculation. Anejaculation can also be caused by diabetes, multiple sclerosis, and spinal cord injury. In these cases, penile vibratory stimulation, rectal probe ejaculation, or surgical sperm retrieval techniques can be used to achieve fertility.