Painful engorgement of the breast is caused by vascular and lymphatic stasis. It usually occurs on the third or fourth day postpartum, before the onset of lactation. It also occurs when lactation, once established, is interrupted. The breasts are heavy, painful, warm, ﬁrm and tender to palpation, with prominent axillary prolongations (axillary tail of Spence, part of the mammary gland that extends along the inferolateral edge of the pectoralis major toward the axilla). Fever rarely exceeds 1 or 2 degrees (°F) over normal. The overlying skin may be edematous and the nipple may be so ﬂattened that the baby cannot grasp it. Pumping or manually expressing some breast milk can help reduce engorgement, allowing the baby to properly latch and nurse. The degree of engorgement usually lessens with each child; ﬁrst-time mothers often have more engorgement than women who are nursing their second or subsequent children. In cases where lactation is being discontinued, the breasts should be ﬁrmly bound and ice packs and analgesics used as needed for pain relief.

Prevention of infectious mastitis consists of taking care to wash the hands well (and any other equipment used) before breastfeeding or breast manipulation. Additionally, the nipples and the infant’s face should also be clean before each feeding. 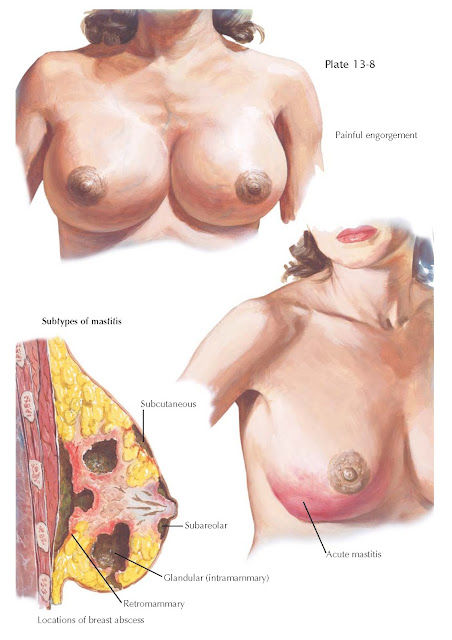 Acute mastitis occurs more frequently during the ﬁrst 4 months of lactation. Mastitis occurs in approximately 10% of breastfeeding mothers in the United States, with more than half of these cases occurring in ﬁrst-time nursing mothers. The portal of entry for the infectious organisms is usually a cracked or traumatized nipple allowing entry for organisms from the baby’s nose and mouth. The signs of onset are fever, leukocytosis, unilateral tenderness, and a zone of induration. In some cases the infection progresses rather rapidly, and the body temperature may rise as high as 105° to 106° degrees Fahrenheit (40.5° to 41° C). In such instances suppuration usually starts within 48 hours. Abscess formation can usually be avoided if antibiotic therapy is instituted promptly. For most cases, nursing need not be stopped. A tight binder supporting the breasts can improve symptoms, along with ice bags applied for analgesia. In suppurative cases, dicloxacillin therapy will treat the infection, but any abscesses formed should be evacuated. The choice of antibiotic should be adjusted based on the patient’s history, allergies (if any), and the prevalence of methicillin resistant Staphylococcus aureus. Ciproﬂoxacin, clindamycin, and trimethoprim/sulfamethoxazole are often effective against methicillin-resistant S. aureus. However, trimethoprim/sulfamethoxazole should be avoided in women breastfeeding infants below the age of 2 months. According to the site of the mastitis, three types have been distinguished the subareolar, the glandular, and the interstitial forms. In the subareolar type of infection, the abscess, when it forms, is conﬁned to the area just beneath the nipple. In the glandular form one or

more lobes are involved, and the abscess may rupture spontaneously, giving rise to a sinus tract. In the interstitial form the fatty and connective tissues are involved, giving rise to a retromammary abscess overlying the pectoral fascia, as shown in the illustration. Once signs of suppuration have developed, efforts to localize the abscess by heat application should be made, and the abscess should be incised and drained. In some cases a chronic mastitis follows the acute condition. All symptoms and signs of acute mastitis may continue for weeks and months, though to a milder degree. Management of the chronic form is the same as for the acute. Rarely, mastitis can occur in women who have not recently delivered as well as in women after menopause. Because inﬂammatory breast cancer has symptoms very similar to mastitis, the possibility that carcinoma may be masked or hide behind an abscess should be kept in mind.