Some degree of mammary hypertrophy is normally found in the male breast during adolescence. In two-thirds of all boys between the ages of 14 and 17 years, a button-shaped plaque of mammary tissue is palpated beneath the nipple. This is known as the puberty node. Although gynecomastia is usually bilateral, it can be unilateral. Normally, this involutes before the age of 21. Rarely, this adolescent growth of tissue may be two or three times its normal size and may be persistent. Sometimes it has been found so discrete and ﬁrm that the observers classiﬁed the enlargement as a benign ﬁbroadenoma. Fat deposition without glandular proliferation is termed pseudogynecomastia.

Gynecomastia most frequently happens in newborn, pubertal, and older males. On palpation, the enlarged mammary gland may be the seat of increased tissue, both mammary and adipose, feeling like the normal female breast. Often a discrete, ﬁrm mass is felt, which is composed microscopically of increased amounts of periductal connective tissue surrounding mammary ducts containing hyperplastic epithelium. 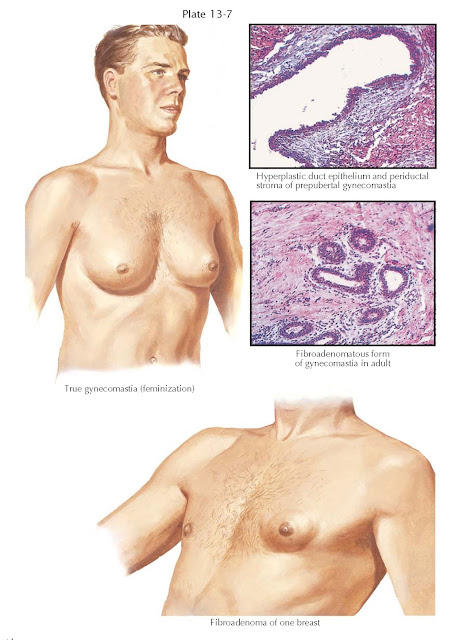 Growth of the mammary gland during puberty is explained by changes in the endocrine environment characteristic of this age. Gynecomastia generally results from an imbalance in the estrogen–androgen balance, in favor of estrogen (stimulatory) over androgen (inhibitory), or increased breast sensitivity to a normal circulating estrogen level. Estrogens induce ductal epithelial hyperplasia, ductal elongation and branching, proliferation of the periductal ﬁbroblasts, and an increase in vascularity just as they do in the female breast: the histologic picture is similar in male and female breast tissue after exposure to estrogen. The Leydig cells of the testes, long accepted to be the source of the androgens, also secrete estrogens. Most estrogen production in males is from the peripheral conversion of androgens (testosterone and androstenedione to estradiol and estrone, respectively) through the action of aromatase, mainly in muscle, skin, and adipose tissue. For this reason, overweight adolescent boys are more likely to undergo these changes or to have more marked changes than those of normal weight. The overall prevalence of adolescent gynecomastia ranges from 4% to 69%.

Gynecomastia in late adolescence and in the adult is, in many instances, associated with clinical endocrine disorders that result in estrogen excess or decreased androgens. Any endocrine disorder that results in hypogonadism, either primary, such as Klinefelter syndrome (46, XXY), or secondary, such as hypopituitarism due to an adenoma, can result in gynecomastia. Other causes include testicular and feminizing adrenal neoplasms. Hyperthyroidism is also associated with gynecomastia, which is thought to be related to a relative decrease in circulating free testosterone due to thyroid stimulated increases in sex hormone binding globulin as well as increased peripheral aromatization. Genetic causes of gynecomastia include complete and incomplete forms of androgen insensitivity as well as certain types of congenital adrenal hyperplasia.

Gynecomastia in adult males is often multifactorial. Increased peripheral aromatization of testosterone to estradiol and the gradual decrease of testosterone production in the aging testes probably accounts for gynecomastia in older men. There are a number of medications associated with gynecomastia, including hormones like estrogen, some antibiotics like metronidazole, antihypertensives like spironolactone, antiulcer medications such as ranitidine, and psychoactive drugs like phenothiazines. Alcohol, especially if associated with cirrhosis, marijuana, methadone and amphetamines, has also been associated with gynecomastia.

Rather frequently, gynecomastia is found in patients with testicular tumors (especially chorioepithelioma but also teratoma and interstitial cell tumors).

Testicular deﬁciency in all its forms may be accompanied by gynecomastia of varying degrees. Mammary hypertrophy has been originally described as an integral part of Klinefelter syndrome. Only when the underlying hyalinization process of the tubular apparatus of the testes in this condition starts late in puberty is gynecomastia a frequent but not obligatory phenomenon.

Simple mastectomy, performed through a curved incision following the margin of the areola, remains the most satisfactory treatment.