Congenital anomalies of the breast, such as agenesis or amastia, aplasia, or the absence of nipple and/or areola, are extremely rare. (Athelia or amastia is sometimes associated with Poland syndrome, consisting of absent chest wall muscles, absence of ribs 2 to 5, and deformi- ties of hands or vertebrae.) An increase in the number of mammae or of nipples only is encountered somewhat more frequently. Both these conditions ﬁnd ready explanation in the embryologic development of the breast. During the 6th to the 12th week of fetal life, the mammary glands ﬁrst develop as solid down growths of the epidermis that extend into the mesenchyme from the axilla to the inguinal regions the milk lines. Later, these ridges disappear, except in the pectoral area where the normal breast develops.

Accessory or supernumerary nipples (polythelia) occur in about 1% of men and 2% of women. These cases are sporadic; although familial polythelia is recognized, it is extremely rare. Most supernumerary nipples resemble a mole or birthmark and are only recognizable because of their anatomic location. Most often the supernumerary nipples are found 5 or 6 cm below the normal pair and toward the midline. They are usually not associated with signiﬁcant amounts of underlying mammary tissue. The accessory nipples without accessory mammary tissue are found anywhere in the course of the milk lines of the embryo. In the adult, this extends from the axillary to the inguinal regions. In the regions below the breast, the milk line runs medially to the normal nipple; above the breast it runs laterally toward each axilla. Supernumerary mammary glands (polymastia) situated laterally are more apt to be of considerable size and to undergo normal lactation compared with those situated medially. Bilateral axillary breasts that are of small size may develop during pregnancy and undergo lactation. They occur in approximately 1% to 2% of women of European descent and 5% to 6% of Asian women. Accessory breast tissue has been classiﬁed into eight levels of completeness from a simple patch of hair to a milk-bearing breast in miniature. This classiﬁcation is based on the presence of glandular and fat tissue, a nipple, an areola, or tufts of hair. 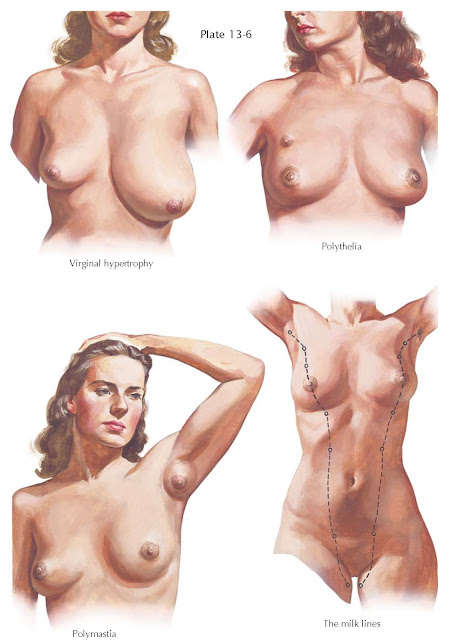 Aberrant mammary tissue in the axilla without nipple formation is more prone to malignant change than is a supernumerary breast, in which the frequency of tumor occurrence is seemingly the same as with a normal single breast. Either benign or malignant tumors can occur in supernumerary or aberrant tissue. A 2000 American Journal of Cardiology article postulated a possible relationship with mitral valve prolapse.

Mammary hypertrophy is a common anomaly of the breast and affects both sexes. In females, the major forms of mammary hypertrophy are precocious or infantile hypertrophy and virginal or gravid hypertrophy occurring, respectively, in adolescent or pregnant women. Precocious mammary hypertrophy is associated with endocrine disturbances of the ovary. It is bilaterally symmetric and rarely of a marked degree. Virginal and gravid hypertrophies are of unknown origin and may be bilateral or unilateral, and the affected breast may grow to enormous size. The enlarging organs are composed of increased amounts of ﬁbrous stroma with hypertrophied ducts, associated at times with lobular formation. The enlargement, once formed, persists.

When this type of hypertrophy occurs in teenage girls, it can have a deeply disturbing effect on a teenager’s self-image and social development. The only effective treatment is reductive mammoplasty.

Some degree of asymmetry of breast development is common, with roughly 3% of patient examinations notable for asymmetric volume differences relative to the contralateral breast. This asymmetry represented a benign, normal variation unless an associated palpable abnormality is present.