The oral mucosa is almost always the first mucocutaneous surface to be affected. Severe erosions and ulcerations occur throughout the oropharynx. This leads to significant pain and difficulty eating. Patients avoid eating because of the severe, unremitting pain. Weight loss and blistering, in combination with the underlying malignancy, result in a severe, life-threatening illness. The hallmark of this disease is the severe oral mucous membrane involvement. In fact, if the patient does not have oral involvement, the diagnosis of paraneoplastic pemphigus should be reevaluated, and the patient most likely has another form of pemphigus. Soon after the onset of oral disease, the patient’s skin begins to break out in vesicles and flaccid bullae. These blisters are identical to those seen in pemphigus vulgaris. Histologically, there are some subtle differences in immunofluorescence.

The bullae can spread, and large surface areas of skin may become involved. Other clinical morphologies of skin disease have been described, including an erythema multiforme–like eruption, a pemphigoid-like eruption, and a lichenoid eruption that can mimic both graft-versus-host disease and lichen planus. These variants are infrequently seen. The combination of paraneoplastic pemphigus and an underlying malignancy has led to poor outcomes; this condition is refractory and very difficult to treat. The diagnosis is made by consistent clinical features in a patient with an underlying malignancy who also has serum autoantibodies against certain proteins, most frequently the plakin family of proteins. 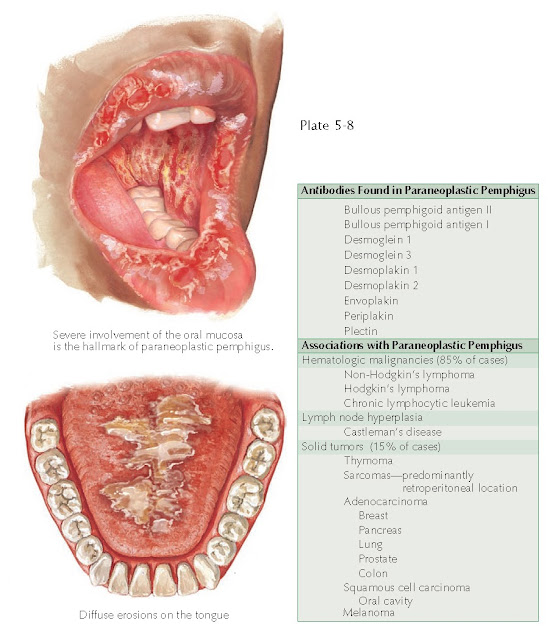 Pathogenesis: Paraneoplastic pemphigus is caused by circulating autoantibodies directed against various intercellular keratinocyte proteins. The most commonly found antibodies are directed against the plakin family of proteins, which include envoplakin and periplakin. Many other autoantibodies have also been found. It is theorized that the underlying neoplasm stimulates the cellular and humoral immune systems to form these autoantibodies. The exact mechanism by which the tumor causes this to occur is unclear.

Histology: Acantholysis is the main histological feature on routine staining. Varying amounts of keratinocyte necrosis are also appreciated. The blister forms within the intraepidermal space. Routine staining cannot differentiate among the various members of the pemphigus family of diseases. Direct immunofluorescence staining in these diseases shows a fishnet staining pattern caused by intercellular hemidesmosomal keratinocyte staining. Paraneoplastic pemphigus is much more likely than any of the other pemphigus diseases to have a positive indirect immunofluorescence staining pattern when rat bladder epithelium is used, whereas the pattern when monkey esophagus epithelium is used is routinely negative. The opposite pattern is seen with most other types of pemphigus. The unique histological and immunofluorescence staining patterns seen in paraneoplastic pemphigus can lead one to the diagnosis. Immunoblotting may also be done.

Treatment: Therapy needs to be directed at the underlying neoplastic process. The overall outcome is extremely poor. The 2-year survival rate has been estimated at 10%. Supportive care to prevent superinfection of the skin is imperative. Immunosuppressants are used to help decrease the blistering, but they may have deleterious effects on the underlying neoplasm. If the underlying neoplasm can be cured, there is a better chance that this disease will go into remission, although this does not always happen. Corticosteroids, azathioprine, intravenous immunoglobulin (IVIG), rituximab, plasmapheresis, bone marrow transplantation, and a host of other therapies have been attempted with limited success.