Pemphigus foliaceus is a chronic autoimmune blistering disease. Pemphigus foliaceus can be seen in an isolated form or as an endemic form called fogo selvagem. These diseases are caused by autoantibody production against desmosomal proteins. The endemic form of the disease is seen in small regions in the jungles of South America, predominantly in Brazil. Pemphigus foliaceus is closely related to pemphigus vulgaris, and in some cases the clinical picture and antibody profile can shift from one disease to the other, leading to difficulty in classification.

Clinical Findings: Pemphigus foliaceus is a rare disease that most frequently affects patients who are about 50 years of age. There is no sex or race predilection. Blistering of the skin is prominent and can affect large body surface areas. The blisters tend to be more superficial than those of pemphigus vulgaris. The blisters are rarely found intact because of their superficial and fragile nature. Mucous membranes are rarely affected, because the mucocutaneous surfaces do not contain high concentrations of the desmoglein 1 protein. Patients exhibit a positive Nikolsky’s sign. This sign is positive when exertion of pressure (rubbing) induces a blister or erosion on nonaffected skin.

Fogo selvagem (Portuguese for “wild fire”) affects a younger population, occurring in patients approximately 25 years of age. It is believed to be transmitted by the bite of the black fly or the mosquito in patients who are susceptible to the disease. It has been postulated that the bite begins a cascade of immune system antibody production, resulting in formation of the pathogenic antibodies against desmoglein 1. The infectious agent transmitted by the flies has not been discovered. A fair percentage of patients have a family member who is also affected, and this provides some clinical evidence for a genetic predisposition to the disease. The disease exhibits photosensitivity in the ultraviolet B range. Indirect immunofluorescence testing of the patient’s serum shows autoantibodies against desmoglein 1. 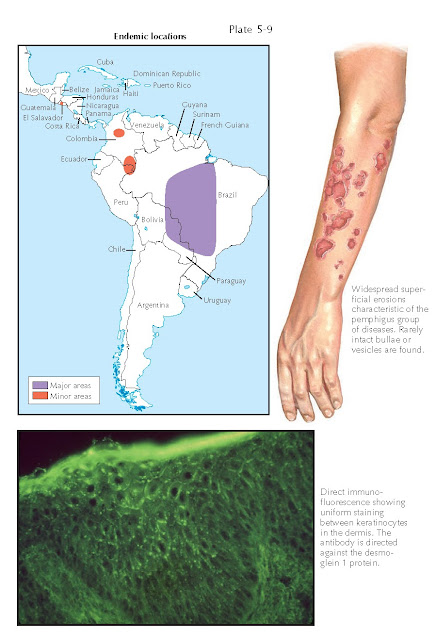 Histology: The histological findings of pemphigus foliaceus and its endemic form, fogo selvagem, are identical. Intraepidermal blistering is caused by acantholysis. The acantholysis is most prominent in the upper epidermis, usually starting in the granular cell layer and above. Typically, a mixed inflammatory infiltrate is seen within the dermis. Varying amounts of crust and superficial bacteria are seen in areas of chronic erosion. Immunofluorescence staining shows a fishnet pattern of intercellular staining with immunoglobulin G and complement.

Pathogenesis: Abnormal antibody production is directed against the desmoglein 1 protein, which is a critical component of the desmosomal attachment between adjacent keratinocytes. Desmogleins are calcium-dependent adhesion proteins known as cadherins. As the autoantibodies attach to the desmoglein protein and are deposited within the epidermis, they activate complement. Complement activation, along with the cytotoxic effects of lymphocytes, leads to acantholysis of keratinocytes and the eventual blistering of the epidermis. The hemidesmosome is unaffected, and the basilar layer of keratinocytes stays attached to the basement membrane zone.

Treatment: Because mucous membrane involvement is almost nonexistent and the blistering is more superficial, the course of pemphigus foliaceus is typically less severe than that of pemphigus vulgaris; however, this is not always the case. Therapy is directed toward decreasing the antibody formation. Immunosuppressants are the mainstay of therapy, and combinations are occasionally required to get the disease under control. Oral corticosteroids are typically the first medications used, along with a steroid-sparing agent. Azathioprine, mycophenolate mofetil, cyclophosphamide, and rituximab have all been used with varying success. Intravenous immunoglobulin (IVIG) has also been used. Use of the non-immunosuppressive agents, tetracycline and nicotinamide, has shown variable success. The same can be said of hydroxychloroquine. The treatment of pemphigus foliaceus requires chronic therapy, because this is a chronically relapsing and remitting disease. Supportive care is required to avoid excessive trauma and friction to the skin, which can induce blistering. Bacterial superinfection needs to be treated promptly.

Therapy for fogo selvagem is similar in many respects. The use of mosquito and fly control measures may be of help in the endemic regions, because these insects are believed to be the vectors of transmission to susceptible humans.