Although an exaggerated thoracic kyphosis has been documented for centuries, it was only with the advent of medical radiography that Scheuermann identified the disease. This progressive disorder occurs in patients near puberty, manifested by an increase in the normal kyphosis in the thoracic spine with an abnormal degree of wedging of the vertebrae at the apex of the kyphotic curve. The diagnosis of Scheuermann disease is limited to patients with a kyphotic curve greater than 60 degrees. (Measurements are done in a manner similar to the coronal plane Cobb method; see Plate 1-40.) Typically the curve is measured from T4 to T12 on the lateral view. Normal kyphosis is 20 to 45 degrees in which at least three adjacent vertebrae are wedged 5 degrees or more and where disc space narrowing and end plate irregularity are noted. Although Schmorl’s nodules are common radiographic findings, they are not part of the diagnostic criteria of Scheuermann disease. 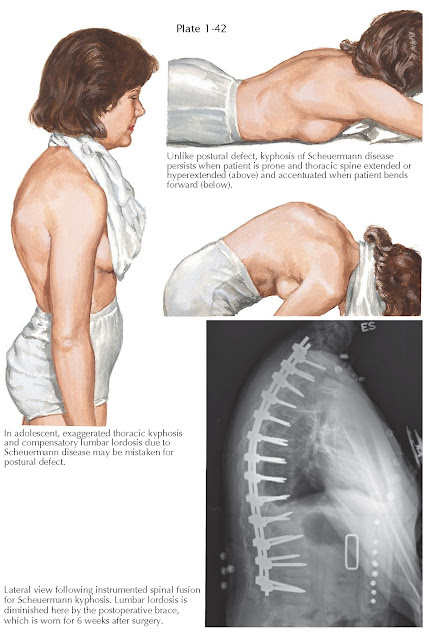 The etiology of Scheuermann disease is not yet understood, but there appears to be a genetic factor. Scheuermann speculated that the disease was caused by avascular necrosis of the anterior portion of the cartilage ring apophysis of the vertebral body, similar to the pathogenesis of Legg-Calvé-Perthes disease. Mechanical factors (particularly heavy labor), contractures of the hamstring and pectoral muscles, and herniation of the intervertebral disc through the anterior portion of the epiphyseal plate have also been suggested as contributing factors. Specimens obtained from patients undergoing anterior spinal fusion for Scheuermann kyphosis have revealed wedge-shaped vertebral bodies and a contracted, thickened anterior longitudinal ligament that acts as a tether across the kyphosis, maintaining a relatively inflexible deformity. Subsequent histologic studies, while confirming a disruption of the epiphyseal plates and extravasation of disc material into the bony spongiosa of the vertebral body, have revealed no evidence of avascular necrosis or inflammatory changes in bone, disc, or cartilage.

Clinical Manifestations. Characteristic signs of Scheuermann disease are the exaggerated, rounded appearance of the back, round shoulders, and poor posture; pain and deformity are uncommon. In adolescents, so-called poor posture may be an important clue to significant structural alterations of the vertebral column that can only be identified with radiography. Despite urging by their parents, children with a true structural problem like Scheuermann disease cannot stand straight. As a result of the exaggerated thoracic kyphosis and lumbar lordosis, affected children typically stand slumped, with the arms folded across a prominent abdomen. The kyphosis is relatively inflexible, is not fully corrected when the patient attempts thoracic hyperextension in the prone position, and is accentuated by forward bending. Mild scoliosis is an associated finding in 20% to 30% of patients, and contracture of the hamstring and pectoral muscles, which leads to forward protrusion of the shoulder girdle, is common. Neurologic examination, usually normal, may reveal a more serious condition such as kyphosis secondary to congenital vertebral deformity or trauma.

Scheuermann disease is often misdiagnosed as postural round-back deformity, which also occurs in pre- adolescent children. However, this type of kyphosis is supple (i.e., it is corrected with prone hyperextension) and is not accompanied by muscle contractures, wedging of the vertebral bodies, or irregularities of the epiphyseal plates. Differential diagnosis includes infectious spondylitis, hypoparathyroidism and hyperparathyroidism, rickets, osteogenesis imperfecta, idiopathic juvenile osteoporosis, neurofibromatosis, tumors, Morquio and Hurler syndromes, and traumatic injuries.

Treatment. In growing children, treatment is instituted to arrest progression of the deformity, improve the cosmetic appearance of the back, and alleviate any pain. The deformity has been shown in some cases to be correctable as long as there is potential for further vertebral growth and the kyphotic deformity is flexible. The spine is held in a corrected position with a cast (not well tolerated) or a high thoracic brace. The kyphosis can correct to a normal curvature in the first year as evidenced by reconstruction of the wedged vertebral bodies and anterior portion of the vertebral apophysis. If untreated, the deformity may progress to a large degree and require surgical correction. Many kyphotic deformities are recognized when the patient is older and less flexible. Although individuals vary, the indications for surgery usually begin with curves in excess of 60 degrees.