Congenital kyphosis is due to the same embryologic failure of segmentation or formation of the vertebrae as congenital scoliosis. The direction of the curve (lateral or posterior) depends on the location of the spinal defect. Anterior defects cause kyphosis, and lateral defects cause scoliosis. A combined deformity, kyphoscoliosis, is common. In about 15% of patients, congenital deformities are associated with an anomaly of the neural elements (e.g., diastematomyelia, neurenteric cyst). 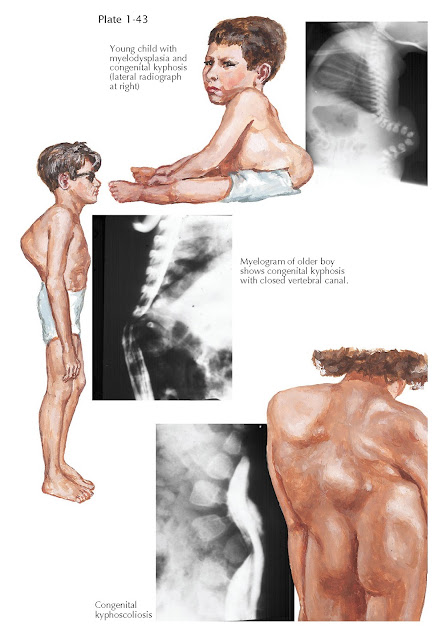 Symmetric failure of formation (absent vertebrae), a rare defect, causes a pure angular kyphosis with a high risk (25%) of paraparesis. Asymmetric failure of formation commonly leads to formation of hemivertebrae and resultant kyphoscoliosis, most often in the thoracic or thoracolumbar spine. Although the alignment of the canal is usually maintained by the strong, intact posterior elements, the kyphoscoliosis may be relentlessly progressive, often increasing 10 degrees per year. The risk of paraplegia is greatest when the apex of the curve is in the upper thoracic spine where there is less room for the spinal cord and the blood supply to the cord is most tenuous.

Partial failure of formation with vertebral canal dis- location (congenital dislocated spine) is characterized by a lack of continuity of the posterior elements of the vertebral canal, leading to instability and the risk of catastrophic neurologic loss from even minor trauma. Even if the injury does not occur, the curve progresses inexorably, producing a gradual loss of neurologic function. In some patients, the neurologic deficit is present at birth, the result of spinal cord compression rather than congenital malformations of the spinal cord.

Neurologic complications are common when the kyphosis or kyphoscoliosis is complicated by rotatory dislocation of the spine, because the spinal cord is twisted over a very short segment. The hump, or kyphos, is abrupt and angular and the cord is fixed at the apex by the roots above and below, which are twisted in opposite directions.

Although functional impairment may be noted at birth or in early childhood, it occurs most commonly at the time of the adolescent growth spurt. Once present, the neurologic deficit gradually worsens. A sudden decline in neurologic function may result from minor trauma. Occurrence or worsening of spasticity in a child with kyphosis is an early sign of myelopathy and should prompt an evaluation leading to spinal fusion with anterior decompression of the spinal cord, if necessary. MRI has largely replaced CT myelography as the procedure of choice in the diagnosis of intraspinal defects. In infants and young children whose posterior elements are still cartilaginous, ultrasonography done by an experienced examiner is an excellent screening modality.

Treatment. Bracing and other nonoperative techniques have very limited application in the management of congenital kyphosis. Before significant kyphosis develops, spinal fusion may often be accomplished by the posterior approach alone. In the patient with a neurologic deficit secondary to either a congenital or a secondary kyphosis and a fixed deformity, anterior decompression of the vertebral canal is essential. If the curve is flexible, gradual traction may improve neurologic function but traction over a rigid kyphos is contraindicated.

About 10% of children with myelodysplasia have a variant of congenital kyphosis in the lumbar spine. The curves are frequently very large at birth and often lead to chronic ulceration of the gibbus. Kyphectomy at the time of sac closure may be necessary to achieve primary skin closure. In older children, kyphectomy with shortening of the lumbar spine and stabilization with instrumentation are often required.