Senile atrophy may follow natural or surgical menopause, or loss of ovarian function by chemotherapy (alkylating agents) or x-ray therapy. It is the result of the loss of estrogen stimulation to the genital tract. The skin changes are variable in degree and slowly progressive. With the loss of subcutaneous fat beneath the mons veneris and labia majora, the vulva assumes an increasingly shrunken appearance. The pubic hair becomes thin, sparse, and brittle. The labia minora, clitoris, and prepuce are reduced in size. The skin becomes thin, inelastic, shiny, and occasionally depigmented. Microscopically, the stratiﬁed squamous epithelium is reduced in thickness and there is a loss of elastic ﬁbers. The underlying connective tissue shows evidence of decreased vascularity and increased ﬁbrosis.

In the past, the terms kraurosis vulvae and leukoplakia were applied to these atrophic changes. The term leukoplakia was applied when there was primarily an inﬂammatory process; kraurosis vulvae was essentially an extreme degree of atrophy. These terms have been discarded in part because abnormal lesions of the vulva require biopsy to establish a correct diagnosis and to rule out the possibility of an occult malignancy (present in 4% to 6% of cases of lichen sclerosis). 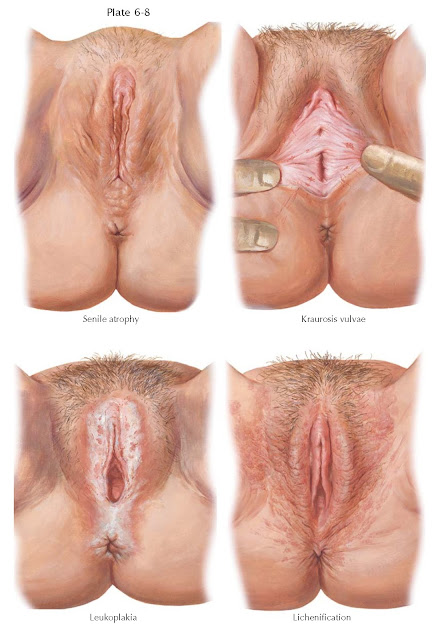 Atrophic vulvitis (the former kraurosis vulvae) is a progressive sclerosing atrophy of marked degree, resulting in stenosis of the vaginal opening and effacement of the labia minora and clitoris. Dyspareunia is a common complaint because of dryness and the shrink age of the vaginal introitus and canal. The vulvar skin is thin, dry, shiny, depigmented, and yellow-white. The tension of parts often causes cracks, excoriations, and annoying pruritus.

These atrophic changes must be differentiated from the changes of lichen sclerosus. Microscopically, the epithelium becomes markedly thinned with a loss or blunting of the rete ridges. In some cases, there is also a thickening or hyperkeratosis of the surface layers. Inﬂammation is usually present. When lichen sclerosus is present, there is usually a diffuse whitish change to the vulvar skin. The vulvar skin often appears thin, and there may be scarring and contracture beyond what is seen with simple estrogen deprivation. In addition, ﬁssuring of the skin is often present, accompanied by excoriation secondary to itching. It is nonneoplastic and involves glabrous skin as well as the vulva. Areas of squamous hyperplasias (formerly called hyperplastic dystrophy without atypia) also appear as whitish lesions in general, but the tissues of the vulva usually appear thickened and the process tends to be more focal or multifocal than diffuse. (The term lichen sclerosus et atrophicus was dropped because the epithelium is metabolically active, not atrophic.)

Vulvar atypia (formerly leukoplakia) may present as a slowly progressing, chronic, inﬂammatory, hypertrophic process involving the epidermis and subepithelial tissues.  It may occur as single or multiple discrete plaques or as a generalized lesion involving the clitoris, prepuce, labia minora, posterior commissure, perineum, and perianal areas. The lesion is grayish white in color, thickened, and almost asbestos-like in appearance. Fissures and ulcerations are common. The histologic picture includes hyperkeratosis, increase in the stratum granulosum, acanthosis, lymphatic inﬁltration of the cutis, and destruction of the elastic ﬁbers of the corium. Differentiation of this from other lesions of the vulva is important because squamous cell carcinoma of the vulva is preceded by these changes in almost 50% of cases.

Prolonged scratching may provoke licheniﬁcation, a secondary change in the skin. The skin has a thickened, leathery appearance in which the normal markings appear accentuated. When moisture is present, the lesion assumes a grayish-white, soggy appearance. Hyperkeratosis, parakeratosis, acanthosis, and prolongation of the retial pegs can be seen histologically, but the subepithelial elastic ﬁbers are not destroyed.