CIRCULATORY AND OTHER DISTURBANCES

CIRCULATORY AND OTHER DISTURBANCES

Varices of the vulva occur most often during pregnancy or as an aftermath of repeated pregnancies or processes that increase intraabdominal pressure. They are usually associated with varicose veins of the lower extremities. A primary factor in their development is the presence of retarded venous ﬂow caused by increased intrapelvic or intraabdominal pressure. The veins of the labia and prepuce are most commonly involved, either unilaterally or bilaterally. They may form subcutaneous convolutions, which sometimes reach the size of a ﬁst. Subjectively, there may be an annoying “dragging” or heavy sensation. The varices become prominent when the patient is standing and tend to disappear when she is in the supine position. Those that occur during pregnancy are apt to subside, to a great extent, after delivery. A varix may rupture as a result of direct trauma, injury during labor, excessive coughing or other straining. Rarely, a venous thrombosis may ensue. When the patient is symptomatic, resection, fulguration, sclerosis, or embolization therapies may be required. 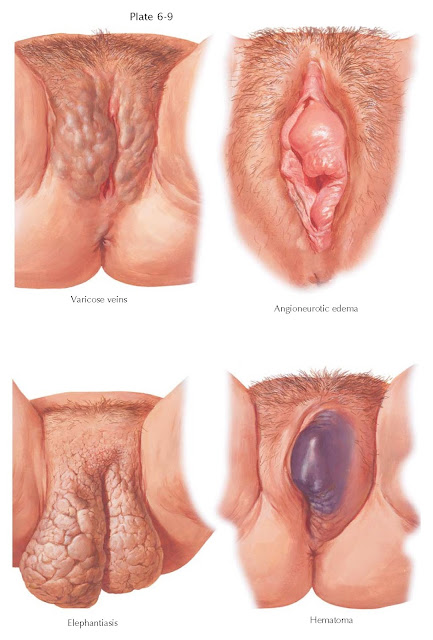 Angioneurotic edema is an allergic reaction, which may involve the vulva as it does other areas. Its diagnosis is suggested by the sudden appearance, without apparent cause, of a large, noninﬂammatory, painless vulvar swelling that is transient. Differentiation should be made from nephrotic or cardiac edema, or that which results from increased intrapelvic pressure secondary to neoplasm or large pelvic exudates. The possibility of a patent canal of Nuck giving rise to an inguinal hernia should also be considered. Because of the loose texture of the subcutaneous tissue of the labia, marked edematous swelling may accompany small local infections or contact with allergens. The list of potential irritants can be extensive, including “feminine hygiene” sprays, deodorants and deodorant soaps, tampons or pads (especially those with deodorants or perfumes), tight-ﬁtting or synthetic undergarments, colored or scented toilet paper, and laundry soap or fabric softener residues. Even topical contraceptives, latex condoms, lubricants, “sexual aids,” or semen may be the source of irritation. Soiling of the vulva by urine or feces can also create signiﬁcant symptoms. Severe dermatitis of the vulva resulting from contact with poison ivy or poison oak is occasionally found.

The term elephantiasis is applied to chronic, hypertrophic tissue changes secondary to excessive lymph stasis. In the tropics, the most common cause is a parasitic worm, Wuchereria bancrofti. Other diseases, particularly lymphogranuloma venereum, may cause obstruction of the lymph channels of the vulva. Histologically, the lymph vessels appear greatly dilated and the subcutaneous tissue is thickened, edematous, and inﬂamed. The surface may be pale, smooth, nodular, or warty. The labia may be converted into large, pachydermatous, sessile, or pedunculated tumors.

A hematoma of the vulva may be secondary to a fall or blow, surgical trauma, or rupture of a varix. The blood from minor extravasations is slowly absorbed. A hematoma of the vulva that occurs during or after labor may be of vital signiﬁcance, because it may extend paravaginally and pararectally to the sub-peritoneal space and be associated with signiﬁcant loss of circulating blood volume. A large collection of blood may distend the labia and inﬁltrate into the ischiorectal fossa and buttock. The most common source of vulvar hematomas in young patients is blunt trauma from straddle injuries, though sexual abuse, rape, and water skiing may also be responsible. Based on the presumed cause, the possibility of an accompanying laceration must always be considered. Analgesics, pressure, and ice are appropriate initial therapies. Surgical drainage for rapidly expanding hematomas or those 10 cm in diameter may be required. Most hematomas gr dually resolve with conservative management only.