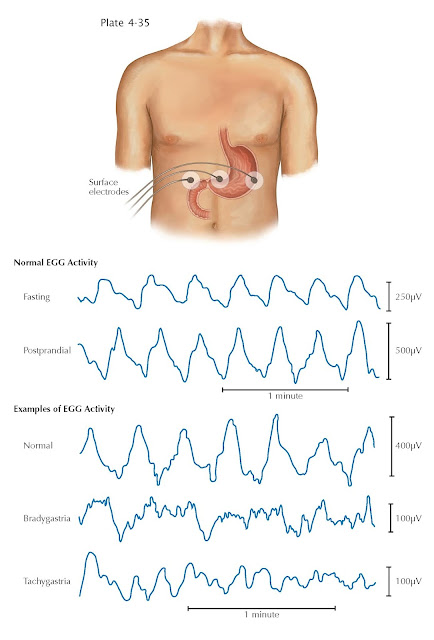 Abnormalities in the EGG signal have been demonstrated in patients with gastroparesis and functional dyspepsia. A significant percentage of these patients may have slow wave frequencies that are very rapid (tachygastria) or very slow (bradygastria). The gastric electrical slow wave propagation velocity, electromechanical uncoupling, or ectopic gastric pacemaker activity can be detected using more advanced EGG recordings, such as a multichannel recording using electrodes placed at different positions overlying the stomach. EGG can also be recorded with serosal electrodes during surgery.

Gastric dysrhythmias (tachygastria, bradygastria) and decreased postprandial amplitude (or power) of the EGG recording have been described in idiopathic and diabetic gastroparesis. Studies have suggested a good correlation between delayed gastric emptying and an abnormal recording, particularly postprandial rhythm and amplitude abnormalities. An abnormal recording is made in about 75% of patients with gastroparesis, compared with only 25% of symptomatic patients with normal gastric emptying. Gastric dysrhythmias have been suggested to be better predictors of symptoms than delayed gastric emptying. In diabetic patients, hyperglycemia may provoke dysrhythmias, primarily tachygastrias.

EGG is used to demonstrate gastric myoelectric abnormalities in patients with unexplained nausea and vomiting with abdominal discomfort or functional dyspepsia. The technique is generally used as an adjunct to gastric emptying scintigraphy, as part of a comprehensive evaluation of patients with refractory symptoms suggestive of an upper gastrointestinal motility disorder.