The perineum and vulva are richly supplied with blood vessels, which become clinically signiﬁcant during childbirth and surgical procedures. Blunt trauma to the area, such as straddle injuries in children, can result in signiﬁcant bleeding or hematoma formation when vessels are ruptured and bleeding into the loose compartments of the perineum occurs.

The internal pudendal artery in the female is a far smaller vessel than it is in the male, though its course is generally the same in both sexes. When leaving the lesser pelvis through the lower part of the greater sciatic foramen, it enters the ischiorectal fossa through the lesser sciatic foramen. Here, accompanied by its venae comites and the pudendal nerve, it lies in a ﬁbrous canal (Alcock canal) formed by the fascia covering the obturator internus muscle. The branches of the internal pudendal artery include small ones to the gluteal region, the inferior hemorrhoidal artery, the perineal artery, and the artery of the clitoris. The pudendal artery (and vein) is closely associated with the pudendal nerve as it passes the ischial spine near the insertion of the sacrospinous ligament (on the dorsal aspect of the coccygeal muscle), placing it at risk when sacrospinous colpopexy is performed. (A rare complication of this operation is massive hemorrhage from the inferior gluteal or pudendal arteries.) 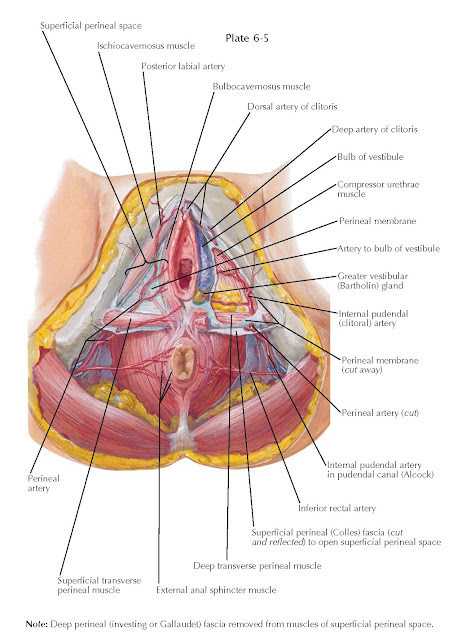 The blood supply of the vulva and perineum is richly connected to the vascular supply of the entire vaginal barrel, the cervix, and the uterus through a number of ascending and descending anastomoses. This vascular net surrounds the vaginal canal, with major trunks running in the lateral vaginal wall at the 3- and 9-o’clock locations. Trauma to these areas, as with a vaginal delivery, can result in signiﬁcant blood loss that may be difﬁcult to control.