INNERVATION OF EXTERNAL GENITALIA AND PERINEUM

INNERVATION OF EXTERNAL GENITALIA AND PERINEUM

The musculature and integument of the perineum are innervated mainly by the pudendal nerve. Derived from the anterior rami of the second, third, and fourth sacral nerves, it leaves the pelvis through the greater sciatic foramen, between the piriformis and coccygeus muscles, and crosses beneath the ischial spine on the mesial side of the internal pudendal artery. It then continues within Alcock canal in the obturator fascia on the lateral wall of the ischiorectal fossa, toward the ischial tuberosity. The pudendal nerve divides into three branches: (1) The inferior hemorrhoidal nerve pierces the medial wall of Alcock canal, traverses the ischiorectal fossa, and supplies the external anal sphincter and perianal skin. (2) The perineal nerve runs for a short distance in Alcock canal and divides into a deep and a superﬁcial branch. The deep branch sends ﬁlaments to the external anal sphincter and levator ani muscles and then pierces the base of the urogenital diaphragm to supply the superﬁcial and deep perineal muscles, the ischiocavernosus and bulbocavernosus muscles, and the membranous urethral sphincter. The superﬁcial branch divides into medial and lateral posterior labial nerves, which innervate the labium majus. (3) The dorsal nerve of the clitoris passes through the urogenital diaphragm to the glans of the clitoris.

A number of nerves innervate the perineal skin. The anterior labial branches of the ilioinguinal nerve (L1) emerge from the external inguinal ring to be distributed to the mons veneris and the upper portion of the labium majus. (Extreme ﬂexion of the leg during childbirth or vaginal operative procedures can result in temporary or permanent loss of function of this nerve.) The external spermatic branch of the genitofemoral nerve (L1, 2) accompanies the round ligament through the inguinal canal and sends twigs to the labium. The perineal branches of the posterior femoral cutaneous nerve (S1, 2, 3) run forward and medial in front of the ischial tuberosity to the lateral margin of the perineum and labium majus. Branches of the perineal nerve (S2, 3, 4) include the dorsal nerve of the clitoris and the medial and lateral posterior labial branches to the labium majus. The inferior hemorrhoidal branch of the pudendal nerve (S2, 3, 4) contributes to the supply of the perianal skin and accounts for the sensory portion of the “anal wink” reﬂex. The perforating cutaneous branches of the second and third sacral nerves perforate the sacrotuberous ligament and turn around the inferior border of the gluteus maximus to supply the buttocks and contiguous perineum. The anococcygeal nerves (S4, 5, and coccygeal nerve) unite along the coccyx and then pierce the sacrotuberous ligaments to supply the anococcygeal area. 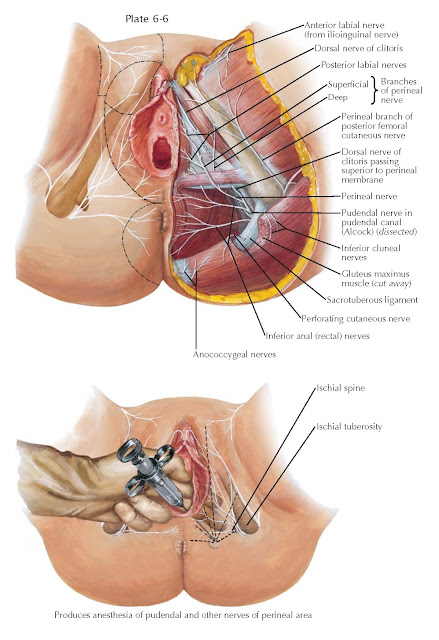 The course and distribution of the pudendal nerve make it an ideal candidate for safe and effective regional nerve blockade. A pudendal nerve block can be accomplished through either a transcutaneous or transvaginal approach, though the former has generally fallen out of favor. In the transcutaneous approach, intradermal wheals are made bilaterally, midway between the rectum and the ischial tuberosities. With the middle and index ﬁngers of the left hand in the vagina, a 10-cm needle is guided to a point just under and beyond the ischial spine, where 10 to 15 mL of a 0.5% to 1.0% local anesthetic solution is deposited. This blocks the internal pudendal nerve, as it passes dorsal to the spine just before entering Alcock canal.

In the transvaginal approach to a pudendal nerve block, the needle is placed within a needle guide and directed to the ischial spine by traversing the lateral vaginal wall. This approach is often faster and better tolerated than a transcutaneous route.