A chylothorax is deﬁned as the accumulation of chyle in the pleural space that results from disruption of the thoracic duct or one of its major tributaries. A total of 1500 to 2500 mL of chyle empties into the venous system daily from the thoracic duct, depending on the fat content of the diet. The formation of chylomicrons occurs from long-chain triglycerides in dietary fats that are transported to the cisterna chyli, which overlie the anterior surface of the second lumbar vertebrae to the right and posterior to the aorta. Although there are multiple variations in the course of the thoracic duct, the usual pathway is through the aortic hiatus of the diaphragm into the posterior mediastinum. The thoracic duct most commonly crosses from the right side of the vertebral column to the left between the 7th and 5th thoracic vertebrae as it ascends posterior to the aortic arch and empties into the junction of the jugular and subclavian veins.

There are multiple causes of chylothorax, with the most common being malignancy and surgical trauma. Surgical procedures that have been associated with chylothorax include esophageal resection, coronary bypass grafting, and radical neck dissection. Chylothorax has been associated with nonsurgical trauma, such as sudden hyperextension of the spine, seat belt injury, severe paroxysms of cough, and even stretching. Non-Hodgkin lymphoma is the most common malignancy associated with chylothorax. Other causes of chylothorax include lymphangioleiomyomatosis, tuberculosis, sarcoidosis, and tuberous sclerosis. Chylous ascites from abdominal malignancy, cirrhosis, or severe right-sided heart failure can result in chylothorax after movement of ascitic ﬂuid transdiaphragmatically into the chest. 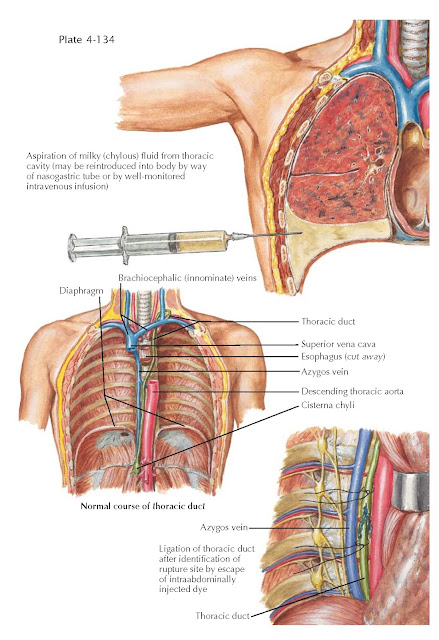 The symptoms associated with a chylothorax are related to the volume of pleural ﬂuid and the status of the underlying lung. Therefore, the most common presenting symptom is dyspnea, which tends to be insidious in onset. On pleural ﬂuid analysis in a nonfasting patient, the ﬂuid will appear milky in character; the milky ﬂuid may be serous if the patient has been fasting for at least 12 hours or bloody if trauma is involved. Chyle has a variable protein content, usually between 2.2 and 6 g/dL, and is lymphocyte predominant (usually 80% of the nucleated cells). A chylothorax is a protein discordant exudate with a lactate dehydrogenase level in the transudative range. A chylothorax has an elevated triglyceride concentration, typically greater than 110 mg/dL. If the level is less than 50 mg/dL in a patient who is not fasting, chylothorax can virtually be excluded. However, the deﬁnitive diagnostic test is the presence of chylomicrons.

Management is focused on maintaining adequate nutrition and minimizing chyle production. Treatment of the underlying disease, such as lymphoma, should always be the initial treatment option. Repeat thoracenteses or chest tube drainage results in removal of large amounts of protein, fats, fat-soluble vitamins, electrolytes, and lymphocytes, promoting an impaired immune response and severe metabolic abnormalities. In traumatic chylothorax, the defect in the thoracic duct often closes spontaneously within 10 to 14 days, and conservative treatment is advocated. Chemical pleurodesis has been successful in patients who are not responsive to conservative therapy. Other measures that have been successful include thoracic duct embolization and administration of a somatostatin, such as octreotide. Thoracic duct ligation is considered to be the deﬁnitive treatment b t is often technically problematic in some individuals.