Helicobacter pylori is a gram-negative bacteria initially cultured from the human stomach in 1982 and considered the most common cause of gastric mucosal injury. It produces large amounts of urease that protects from acid injury, enabling it to penetrate gastric epithelial cells. The transmission mechanism of H. pylori remains unclear. Interpersonal transmission appears to be the main route; transmission by environmental substances, such as contaminated water, is another cause.

The prevalence of H. pylori is high in the global population (≈50%); it is less frequent in developed areas such as Northern Europe and North America (≈30%) compared with Asia and Africa. The worldwide prevalence in the younger generations is declining, mainly in developed countries. 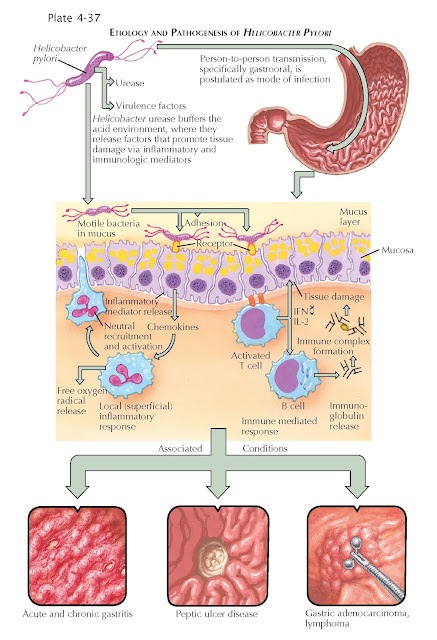 The bacteria causes gastritis; if it persists, gastric atrophy with intestinal metaplasia eventually affects the gastric acid secretion level, based on the location and severity of the inflammation in the stomach. H. pylori reduces the mucosal gel layer and affects mucosal blood flow. It is the main cause of duodenal ulcer, through increase in acid pepsin and gastric metaplasia in the duodenal cup. In addition to the host factor and diet, virulence factors of H. pylori (CagA, VacA, DupA, IceA, OipA, and BabA) have been revealed to be the predictors of gastric atrophy, intestinal metaplasia, duodenal ulcer, and gastric cancer. However, there is no evidence that strategies based on testing for these factors are useful for an individual patient.

Although H. pylori infection does not always cause clinical disease, it strongly affects the relative risk of various disorders in the upper gastrointestinal tract, such as gastritis, peptic ulcer disease, gastric cancer, MALT lymphoma, idiopathic thrombocytopenic purpura, and iron deficiency anemia. On average, the H. pylori status has no effect on symptom severity, recurrence, or treatment efficacy in patients with GERD. Many patients have functional dyspepsia symptoms rather than peptic ulcer disease.

Endoscopic biopsies enable culture and histologic examination with excellent results. The rapid urease test and polymerase chain reaction procedure for gastric biopsy specimens also have a high yield. The noninvasive C13-urea breath test and stool antigen test have high sensitivity and specificity, and both tests are recommended for detection. However, proton pump inhibitors and antibiotic treatment can affect and inhibit urease activity. Serologic results for anti H. pylori antibodies are not all equivalent, and only validated immunoglobulin G serology tests should be used owing to variability in different commercial tests.

H. pylori infection is the most consistent risk factor for gastric cancer. Its elimination is the most promising strategy for reducing the incidence of gastric cancer and lowering the risk of recurrent peptic ulcer bleeding. Guidelines therefore advocate a test-and-treat strategy for patients with a history of ulcer bleeding and NSAID and/or aspirin use.

Confirmation of eradication is recommended at least 4 weeks after treatment. A urea breath test or monoclonal stool test is recommended as a noninvasive test for determining eradication success; currently, there is no role for serologic testing. In countries where H. pylori infection is prevalent, studies focusing on virulence factors and antibiotic susceptibility may improve the prognosis and be helpful in reducing complications and the risk of death.

H. pylori posteradication recurrence is infrequent and is found mainly in areas of low socioeconomic development. Eradication reduces the risk of complicated and uncomplicated peptic ulcer disease associated with use of NSAIDs or low-dose acetylsalicylic acid. H. pylori eradication is beneficial before starting NSAID treatment, and mandatory in patients with a history of pelvic ulcer disease. Eradication produces long-term relief of dyspepsia in 1 of 12 patients with functional dyspepsia, a rate that is better than for any other treatment available.