A paracardial or paraesophageal hernia is seen less frequently than is a sliding diaphragmatic hernia and is characterized by the protrusion of the gastric fundus into the intrathoracic space alongside the esophagus, which is of normal length and in the usual and fixed position. The cardia and its attachment by the gastrophrenic ligament remains intact while the fundus slips through a fibromuscular defect directly to the left or right of the gastroesophageal junction. The parietal peritoneum, which normally covers the abdominal surface of the diaphragm, has prolapses and serves as the outer wall of the hernia sac. These anatomic relations explain why, with a paraesophageal hernia, there is no insufficiency of the lower esophageal sphincter mechanism and, hence, no occurrence of peptic esophagitis.

The hiatus between the terminal portion of the esophagus and the diaphragmatic crus (or phreno- esophageal ligament) is, as a rule, so narrow that it may interfere with the circulation of the prolapsed portion of the fundus, which will consequently become congested. The venous congestion leads to inflammatory reactions of the mucosa, which tends then to erode or bleed, particularly in the area of the hiatal defect. The resulting blood loss, in some cases, may be of such magnitude as to produce a chronic and recurrent anemia, which may be the first and only clinical sign of the disease. The paraesophageal hernia, however, assumes its clinical significance essentially by the potential danger of strangulation of the herniated parts. The predominant symptoms with this type of hernia are epigastric and substernal pain, nausea, and, rarely, dysphagia. An increase in the intermittent attacks of pain, the appearance of hematemesis, and a tendency toward cardiovascular collapse should always arouse the suspicion of a possible strangulation. Careful examination of a chest radiograph may reveal a gas bubble from the herniated gastric fundus adjacent to the normally placed esophagus with normal topographic relations of the gastroesophageal junction. 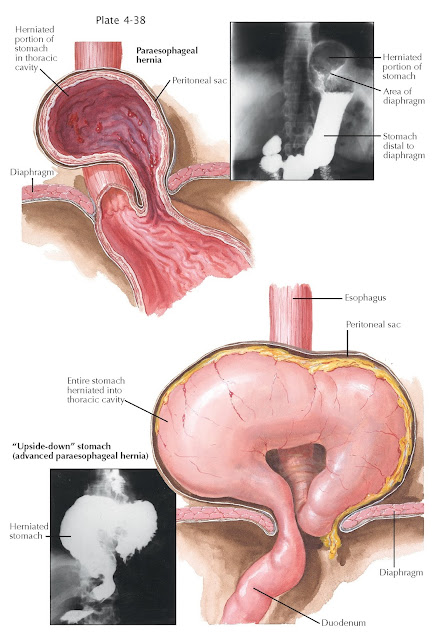 An extreme variant of the paraesophageal hernia has been quite pertinently called the upside-down stomach. In such instances a markedly widened hiatus in the diaphragm has permitted the entire stomach to enter the thorax and lie within the herniated sac. The stomach is rotated around its longitudinal axis, and the more movable major curvature thus becomes the dome of the prolapse. The cardia and pylorus are in close apposition to each other, and lie, with such a complete herniation of the organ, at the same level.

Once the diagnosis of a paraesophageal hernia has been established, its surgical repair is definitely indicated, not only because of the symptoms and signs (epigastric pain and anemia) but more so because of the always imminent danger of incarceration.