The term hypertrophic pyloric stenosis is a misnomer, because the disorder is not due to hypertrophy but rather to hyperplasia of the smooth muscle layers of the prepyloric region, particularly the circular layer. The increase in muscular mass diminishes the size of the lumen, causing obstruction. Depending upon the degree of the obstruction and its duration, the stomach may be enormously dilated. The pylorus bulges forward like a tumor, terminating abruptly at the beginning of the duodenum at one end and, on average, about 2 cm proximally at the other end. The consistency of the pylorus in this condition is remarkably firm, almost as hard as that of cartilage. The condition occurs five to seven times more frequently in boys than in girls and occurs in about 3 in 1000 live births. It is more common in those of Northern European descent. 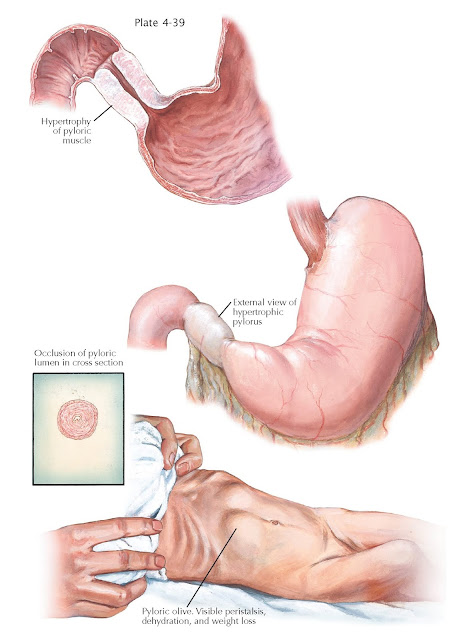 Vomiting is classically the first symptom and may appear between the second and sixth weeks of life. It may begin with mild spitting, but increases in frequency and severity that progresses to projectile vomiting. The infants cry, indicating hunger and willingness to take food. With less food and fluid passing through the obstructed pylorus, the patients lose weight and become dehydrated. In this stage a metabolic alkalosis may present a serious problem. The enlarged pylorus may be palpated as the classic “olive,” and strong peristaltic movements of the stomach may be observed on simple inspection of the abdominal wall. Adults typically present with nausea, vomiting, early satiety, and postprandial epigastric pain. The enlarged pylorus is less readily palpable on the adult physical examination.

Diagnosis in infants can often be made by the history and physical examination. X-ray examination may be done prior to surgical repair. On a barium study, the stomach appears abnormally large and dilated, with no passage of contrast in the duodenum until 1/2 hour to 2 hours later. Diagnosis can be confirmed using abdominal ultrasound, which will show a hypertrophied canal that appears as a sonolucent 3-mm “doughnut.” In adults, upper endoscopy is recommended to rule out chronic peptic or malignant disease.

Treatment for hypertrophic pyloric stenosis begins with fluid resuscitation and correction of electrolyte abnormalities. Medical therapy with anticholinergics has a high failure rate, and is therefore rarely used. Definitive treatment is with Ramstedt pyloromyotomy, where a longitudinal incision is made through the hypertrophied muscle down to the submucosa. An alternative surgery is pyloric trauma myoplasty, where the pylorus is grasped with a Babcock clamp, causing displaced muscle at two locations. Laparoscopic pyloromyotomy has become increasingly common. Infants resume normal growth and development after pyloromyotomy. The resulting cure is permanent, leaving no tendency to diseases of the upper gastrointestinal tract. In adults, resection of the pylorus is recommended to rule out malignancy. The pylorus can also be endoscopically dilated, but this is associated with a higher failure rate.