Gastric diverticula are practically all located on the posterior wall of the cardia and to the left of the esophagus. Diverticula located at the pyloric end of the stomach or on the anterior wall of the cardia have been reported only in a few isolated cases. Whether gastric diverticula develop in postnatal life or originate during the fetal period cannot be decided upon with certainty. Small sacculations of the posterior wall have occasionally been observed in the stomach of the human fetus. On the other hand, the structural weakness of the longitudinal muscles on the posterior surface points also to the possibility that the diverticula may be acquired during a lifetime by a pulsion mechanism. Both theories could explain the site of predilection and the rare occurrence of diverticula. 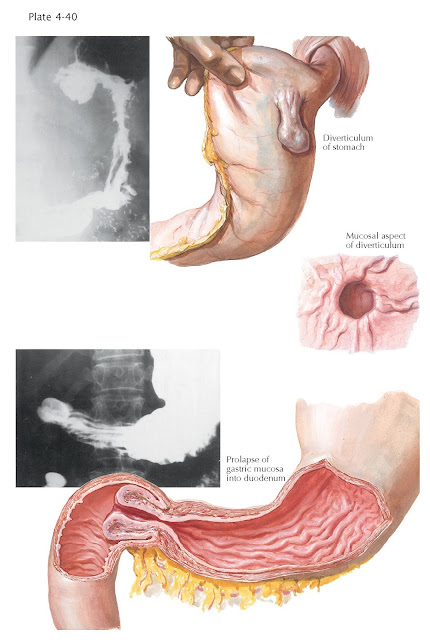 As a rule, all layers of the stomach participate in forming the pouch of the gastric diverticula, but, occasionally, one or the other layer may be absent totally or in part. The diverticula are usually 2 to 3 cm long and from 1 to 2 cm in diameter. The opening of the diverticulum is, in most cases, wide enough to allow free communication between the pouch and the stomach, and these patients have no complaints. Occasionally, the ingesta may become impacted and cause inflammation. The danger of a perforation is relatively small. Roentgenographically, a diverticulum of the stomach may be demonstrated as a saccular structure that fills with barium when the patient is asked to lie down and, a few minutes later, to stand up. The pouch on the posterior wall may be seen within the cardiac air bubble at some distance to the left of the esophageal entrance. Over-distention of the stomach with barium may obscure the deformity. Sometimes it may be necessary to turn the patient obliquely, with the right side against the screen or film. The diverticulum will then appear to extend from the lesser curvature. A penetrating ulcer in the upper regions of the stomach may produce x-ray pictures quite similar to those of a diverticulum, and if the clinical manifestations are very pronounced, it is preferable to assume the presence of an ulcer.

A prolapse of the gastric mucosa into the duodenum probably develops because of extreme movability of the antral mucosa and submucosa, which, for one reason or another, adhere only loosely to the external layers of the wall. The mucosa of the antrum, which normally is thicker than the mucosa of other parts of the stomach and sometimes assumes a cushionlike quality, is pushed through the pyloric ring to lie like a turned-back cuff of a sleeve within the duodenum. A fully developed prolapse is rare, but partial ones are quite frequent, though they have little or no clinical significance. In the x-ray picture the bulb of the duodenum appears as if it were filled with a tuberous mass, which has irregular contours owing to the fact that the contrast medium lies only on top of the mucosal folds and is absent in the pits. The diagnosis is easy, thanks to the typical configuration, and in only a few special cases is it difficult to differentiate such a prolapse from a polyp or an acute ulcer with a marked mucosal edema of its surroundings. Strangulation of the prolapsed segment and extreme swelling of the mucosa, with subsequent signs of a pyloric stenosis or hemorrhages from congested mucosal blood vessels, are rare occurrences.