The femoral nerve (L2, 3, 4) is the largest branch of the lumbar plexus (see Plate 2-5). It originates from the posterior divisions of the ventral rami of the second, third, and fourth lumbar nerves, passes inferolaterally through the psoas major muscle, and then runs in a groove between this muscle and the iliacus, which it supplies. It enters the thigh behind the inguinal ligament to lie lateral to the femoral vascular sheath in the femoral triangle. Twigs are given off to the hip and knee joints and adjacent vessels, and cutaneous branches are given off to anteromedial aspects of the lower limb.

Muscular branches supply the pectineus, sartorius, and quadriceps femoris muscles. The nerve to the pectineus muscle arises at the level of the inguinal ligament, whereas the branches to the sartorius muscle enter the upper two thirds of the muscle, several arising in common with the anterior femoral cutaneous nerves. The branches to the quadriceps femoris muscle are arranged as illustrated, and those to the rectus femoris and vastus lateralis muscles enter the deep surfaces of the muscles. The branch to the vastus intermedius muscle enters its superficial surface and pierces the muscle to supply the underlying articularis genus muscle. The branch to the vastus medialis muscle runs in the adductor canal for a variable distance, on the lateral side of the femoral vessels and saphenous nerve, giving off successive branches to this muscle, some of which end in the vastus intermedius and articularis genus muscles. 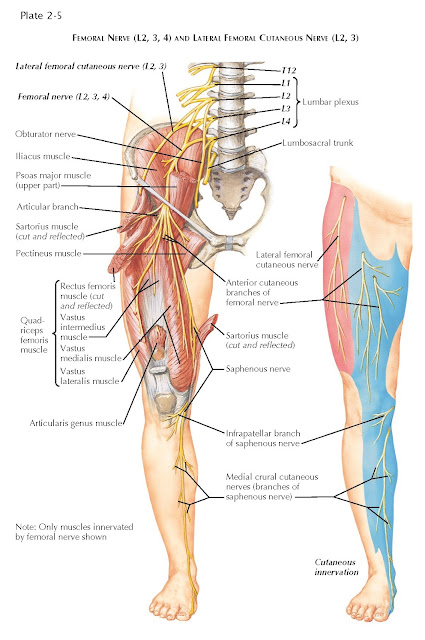 The anterior femoral cutaneous nerves arise in the femoral triangle. All these branches pierce the fascia lata 8 to 10 cm distal to the inguinal ligament and descend to knee level, supplying the skin and fascia over the front and medial sides of the thigh.

The saphenous nerve is the largest and longest of the femoral branches. It arises at the femoral triangle and descends through it on the lateral side of the femoral vessels to enter the adductor canal. Here, it crosses the vessels obliquely to lie on their medial side in front of the lower end of the adductor magnus muscle. In the canal, the saphenous nerve communicates with branches of the anterior femoral cutaneous and obturator nerves to form the subsartorial plexus. At the lower end of the canal, it leaves the femoral vessels and gives off its infrapatellar branch, which curves around the posterior border of the sartorius muscle, pierces the fascia lata, and runs onward to supply the skin over the medial side and front of the knee and the patellar ligament. This branch assists off shoots from the anterior and lateral femoral cutaneous nerves in forming the patellar plexus. The saphenous nerve continues its descent on the medial side of the knee, pierces the fascia lata between the tendons of the sartorius and gracilis muscles, courses downward on the medial side of the leg close to the greater saphenous vein, and gives off its medial crural cutaneous branches.  In the lower leg, it subdivides terminally the smaller branch follows the medial tibial border to the level of the ankle and the larger passes anterior to the medial malleolus to distribute to the skin and fascia on the medial side and dorsum of the foot.

Articular branches arising from the nerve to the rectus femoris muscle accompany the corresponding branches of the lateral femoral circumflex artery to the hip joint. Twigs from the branches to the vastus muscles and from the saphenous nerve supply the knee joint.

The lateral femoral cutaneous nerve (L2, 3) emerges from the lateral border of the psoas major muscle, passes obliquely over the iliacus muscle behind the parietal peritoneum and iliac fascia (which it supplies) toward the anterior superior iliac spine, and enters the thigh by passing under or through the lateral end of the inguinal ligament (see Plate 2-5). The nerve then passes over or through the proximal part of the sartorius muscle and descends deep to the fascia lata. It gives off a number of small branches to the overlying skin before piercing the fascia about 10 cm below the inguinal ligament. The terminal branches of the lateral femoral cutaneous nerve supply the skin and fascia on the anterolateral surfaces of the thigh between the levels of the greater trochanter of the femur and the knee. 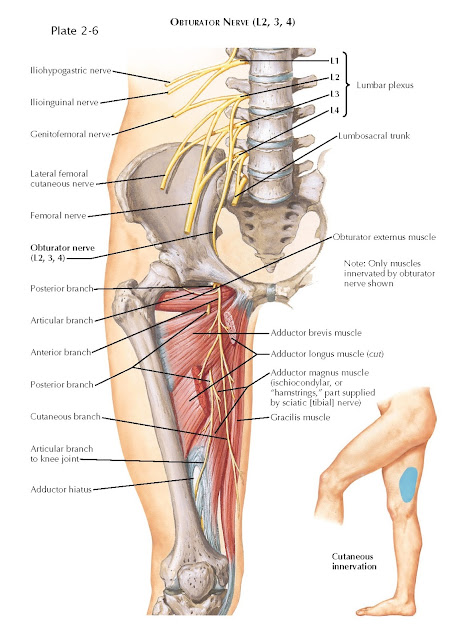 The obturator nerve (L2, 3, 4) supplies the obturator externus and adductor muscles of the thigh, gives filaments to the hip and knee joints, and has a variable cutaneous distribution to the medial sides of the thigh and leg (see Plate 2-6).

The obturator nerve arises from the anterior divisions of the ventral rami of the second, third, and fourth lumbar nerves. The contribution from L2 is commonly the smallest and is sometimes absent. These roots unite within the posterior part of the psoas major muscle, forming a nerve that descends through the muscle to emerge from its medial border opposite the upper end of the sacroiliac joint. The obturator nerve runs outward and downward over the sacral ala and pelvic brim into the lesser pelvis, lying lateral to the ureter and internal iliac vessels. It then bends anteroinferiorly to follow the curvature of the lateral pelvic wall (anterior to the obturator vessels and lying on the obturator internus muscle) to reach the obturator groove at the upper part of the obturator foramen. The nerve passes through this groove and foramen to enter the thigh and divides into anterior and posterior branches shortly thereafter.

The anterior branch runs in front of the obturator externus and adductor brevis muscles and behind the pectineus and adductor longus muscles. Near its origin, it gives off an articular twig that enters the hip joint through the acetabular notch. Rarely, it supplies a branch to the pectineus muscle and sends muscular branches to the adductor longus, adductor gracilis, and adductor brevis muscles. The anterior branch finally divides into cutaneous, vascular, and communicating branches.

The cutaneous branch is inconstant. When present, it unites with branches of the saphenous and anterior femoral cutaneous nerves in the adductor canal to form the subsartorial plexus and assists in the innervation of the skin and fascia over the distal two thirds of the medial side of the thigh. Infrequently, this branch is larger and passes between the adductor longus and gracilis muscles to descend behind the sartorius to the medial side of the knee and the adjacent part of the leg, where it assists the saphenous nerve in the cutaneous supply of those areas.

The vascular branches end in the femoral artery. Other fine communicating branches may link the obturator nerve with the anterior and posterior femoral cutaneous nerves and the inconstant accessory obturator nerve.

The posterior branch pierces the anterior part of the obturator externus muscle and supplies it. There-after, the nerve runs downward between the adductor brevis and adductor magnus muscles and splits into branches that are distributed to the upper (adductor) part of the adductor magnus and sometimes to the adductor brevis (especially if the latter does not receive a supply from the anterior branch of the obturator nerve). A slender branch emerges from the lower part of the adductor magnus, passes through the hiatus of the adductor canal together with the femoral artery, and then continues to the knee joint. The posterior branch contributes filaments to the femoral and popliteal vessels and ends by perforating the oblique popliteal ligament to supply the articular capsule, cruciate ligaments, and synovial membrane of the knee joint. The fibers to the capsule and ligaments are mostly of somatic origin, whereas those to the synovial membrane are mainly sympathetic.

The accessory obturator nerve (L3, 4) is inconstant, small, and derived from the anterior divisions of the ventral rami of L3 and L4. It descends on the medial border of the psoas muscle and then crosses the superior pubic ramus to lie behind the pectineus muscle. It ends by helping to supply the pectineus but may also supply one twig to the hip joint and another twig that joins the anterior branch of the obturator nerve. 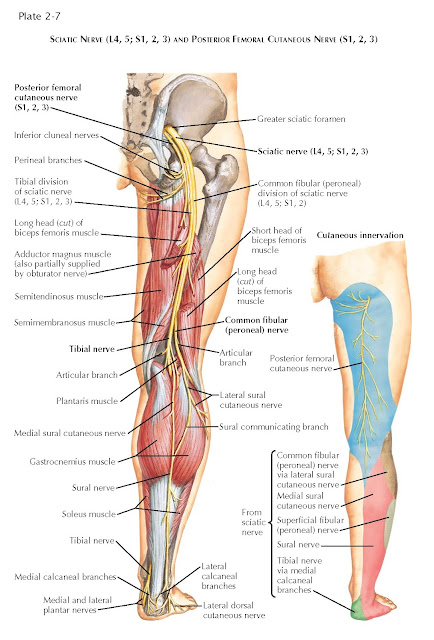 The roots of the sciatic nerve (L4, 5; S1, 2, 3) arise from the ventral rami of the fourth lumbar to third sacral nerves and unite to form a single trunk that is ovoid in cross section and 16 to 20 mm wide in adults (see Plate 2-7). In the lesser pelvis, the nerve lies anterior to the piriformis muscle, below which it enters the buttock through the greater sciatic foramen (in about 2% of individuals, the nerve pierces the piriformis). Next, the nerve inclines laterally beneath the gluteus maximus muscle, where it rests on the posterior surface of the ischium and the nerve to the quadratus femoris muscle. On its medial side, it is accompanied by the posterior femoral cutaneous nerve and by the inferior gluteal artery and its special branch to the nerve.

On reaching a point about midway between the ischial tuberosity and the greater trochanter of the femur, the nerve turns downward over the gemellus muscles, the obturator internus tendon, and the quadratus femoris muscle (which separate it from the hip joint) and leaves the buttock to enter the thigh beneath the lower border of the gluteus maximus muscle.

In the buttock, the sciatic nerve supplies an articular branch to the hip, which perforates the posterior part of the joint capsule (see Plate 2-4). It may also supply vascular filaments to the inferior gluteal artery. (The entrance of the sciatic nerve and its variable relationship to the piriformis muscle are described on page 60.)

At levels below the quadratus femoris muscle, two branches of the tibial division of the sciatic nerve spring from its medial side to supply the so-called hamstring muscles of the thigh. The upper branch passes to the long head of the biceps femoris muscle and the upper portion of the semitendinosus; the lower branch innervates the lower portion of the semitendinosus and the semimembranosus muscles and the ischiocondylar portion of the adductor magnus muscle. The nerve to the short head of the biceps femoris muscle arises from the lateral side of the sciatic nerve (common peroneal division of the sciatic nerve) in the middle third of the thigh and enters the superficial surface of the muscle. From this nerve, an articular branch continues to the knee, providing proximal and distal branches that accompany the lateral superior genicular and lateral inferior genicular arteries to the knee joint.

The tibial and common peroneal nerves arise by a division of the sciatic nerve, usually at the upper limit of the popliteal fossa. The tibial nerve continues the vertical course of the sciatic nerve at the back of the knee and into the leg (see Plate 2-7). The common peroneal nerve follows the tendon of the biceps femoris muscle along the upper lateral margin of the popliteal space and into the leg, curving forward around the neck of the fibula (see Plate 2-7).