Hypersensitivity pneumonitis (HP), or extrinsic allergic alveolitis, is an inﬂammatory disease caused by immune responses to inhaled antigenic organic particles or fumes. Episodes of acute and subacute HP usually resolve when antigen exposure ceases, although chronic HP may be progressive and irreversible, leading to debilitating ﬁbrotic lung disease. HP can be caused by a wide variety of antigens that result in a common pattern of immune responses and clinical features. Colorful names such as pigeon breeder’s disease, bagassosis, and maple bark stripper’s lung have been attached to HP when caused by speciﬁc occupational exposures, but the patterns of disease and the features of the immune responses appear to be common to all forms. The classic example of HP is “farmer’s lung disease,” an illness initially described in dairy farmers who developed episodes of cough, shortness of breath, sometimes fever, and pulmonary inﬁltrates when exposed to the spores of bacteria that grew in bales of moldy hay. Hay that was wet when baled would support mold growth, and the heat of fermentation would then support growth of thermophilic Actinomyces bacteria. As the heated bales dried, the bacteria would convert from replication to the formation of hardy spores of small respirable size and light weight. When cracked open, a cloud of spores would rise from the moldy bale like a puff of smoke and readily be inhaled by the farmer handling it. Because only the occasional bale might be moldy, illness might be intermittent. HP is remarkable for the diversity of occupations and exposures that can cause the disease. Agents include spores from bacteria and molds, amoebae, bird and animal danders, and fragments of plant materials; more than 200 antigens have been identiﬁed. 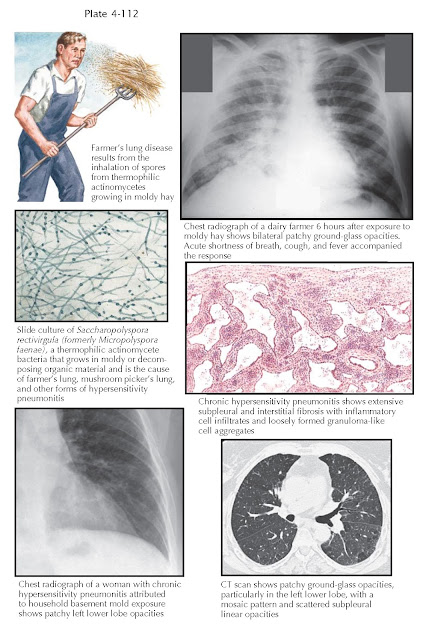 Three patterns of HP are recognized: (1) an acute form with episodes that occur within 4 to 8 hours of antigen exposure and clear within about 48 hours, (2) a subacute form that last from 48 hours to several months, and (3) a chronic form lasting 4 months or longer. It is believed that occasional, intermittent, intense exposures may favor the acute form (e.g., the rare bale of moldy hay fed in the winter), and continuous or daily exposure may favor the subacute form (e.g., a pet parakeet in the home). With frequent or prolonged exposure, the chronic form of the disease may develop with permanent pulmonary ﬁbrosis.

The clinical features of acute HP include the abrupt onset of ﬂulike symptoms with fever, aches, malaise, cough, and dyspnea within a few hours of known (or unsuspected) exposure. The patient appears ill, and crackles (rales) may be present on lung auscultation. Chest radiographs may reveal inﬁltrates that lead to an initial diagnosis and treatment of community-acquired pneumonia. Chest computed tomography (CT) scans show scattered ground-glass opacities with small centrilobular nodular opacities. The lung pathology of acute HP features an inﬂammatory interstitial inﬁltrate consisting of lymphocytes (predominantly CD8 T cells), plasma cells, mast cells, and macrophages. Scattered, poorly formed, noncaseating granulomas and occasional multinucleated giant cells may be seen, particularly adjacent to small airways. Neutrophils may be present, but eosinophils are notably not a prominent part of this immune response. Bronchoalveolar lavage (BAL) reﬂects the alveolar inﬂammatory exudate with a very high proportion of lymphocytes (30%) and usually a predominance of CD8 cells (in contrast to sarcoidosis, in which CD4 cells are increased). If the exposure has been limited, the symptoms clear within 48 hours and the radiographs within 4 weeks. Repeated episodes may prompt suspicion for HP rather than infection.

Subacute HP occurs with repeated or continuous exposure to the sensitizing antigen and resembles the acute form with less abrupt onset and fewer systemic symptoms. Cough and dyspnea predominate and may become progressively severe. The chest CT scan may show less ground-glass opacity and centrilobular nodules that are more distinct. Subacute HP exhibits granulomas that may be better formed but with interstitial inﬂammation away from the granulomas as well. Symptoms and radiographs may clear more slowly when exposure ends, but resolution is usually complete. Chronic HP may be indolent, progressive, and easily confused with idiopathic pulmonary ﬁbrosis. Symptoms feature dyspnea with exertion and nonproductive cough. Crackles are heard on lung examination, and rarely digital clubbing may be present. The CT scan shows areas of linear and reticular opacities as well as ground glass, and honeycombing may be evident. Chronic HP demonstrates interstitial ﬁbrosis and may sometimes include traction bronchiectasis and honey-comb formation that closely resembles usual interstitial pneumonitis. A predominantly lymphocytic interstitial inﬁltration and occasional granulomas permit distinction in most cases.

The diagnosis of HP depends on establishing a combination of exposure to a plausible antigen, a compatible clinical syndrome, appropriate radiologic ﬁndings, demonstration of an immunologic response to the antigen, and typical lung pathology. BAL with a CD8 lymphocytosis is conﬁrmatory but not diagnostic. In most cases, all of these dimensions are not needed or available for diagnosis. Historically, most cases of HP were associated with occupational exposures, but hobbies (pet birds), hot tubs, and home environmental exposures now predominate in developed countries. A recent large case series from the United States reported that a speciﬁc cause was identiﬁed in only 75% of cases despite vigorous attempts; thus, the clinical picture and lung biopsy were needed in the others. Serologic testing offered diagnosis in only 25%. The most common identiﬁed causes were avian antigens (34%; parakeets, parrots, pigeons), hot tub lung (21%; Mycobacterium avium), and mold (20%; farmer’s lung, household exposure). 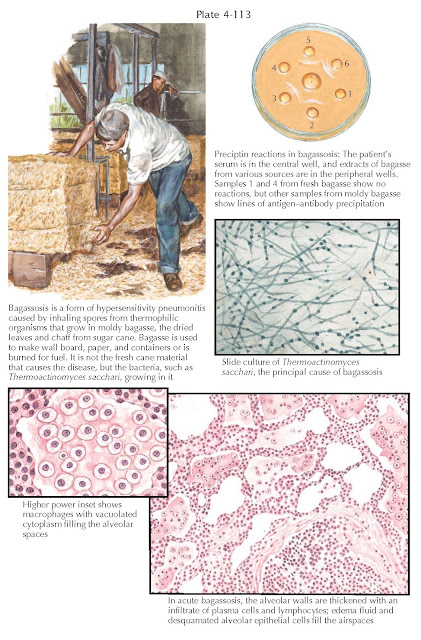 Removal from exposure to the antigen is the key to the treatment of HP, so correct identiﬁcation of the antigen is critically important but not successful in many cases. It is very important to establish a diagnosis with conﬁdence because for those with occupational exposures, avoiding the antigen may involve loss of a job or a very costly modiﬁcation of the workplace. For home or hobby exposures, excluding a beloved pet or a major change in lifestyle may be needed. Systemic corticosteroid therapy is useful in relieving acute symptoms and short-term reversal of lung pathology. Long-term steroid treatment is not recommended because of side effects and uncertain efﬁcacy; ﬁbrosis may continue if exposure does not end. Resolution and a favorable outcome can usually be expected with prompt diagnosis and successful removal from the antigen.