Numerous minerals and metals that are mined, milled, quarried, carved, or used in industrial processes can cause lung disease if particles or fumes are inhaled. In many instances, the materials are relatively inert. Large amounts of the mineral can accumulate in the lung to create an impressive dust burden on pathologic examination (iron) or a striking chest radiograph (barium) but few symptoms and little pulmonary dysfunction. In some instances, metal fumes (cadmium) or particles (cobalt) can cause acute lung injury or trigger an immune response.

China clay (kaolin, aluminum silicate) is mined from surface quarries and crushed to a ﬁne powder. Kaolin is used widely as an absorbent, as an additive to thicken paints and other products, and to manufacture porcelain ceramics. Workers exposed to high levels of kaolin dust may accumulate large amounts of the mineral in their lungs and may develop a mild pneumoconiosis that resembles silicosis. 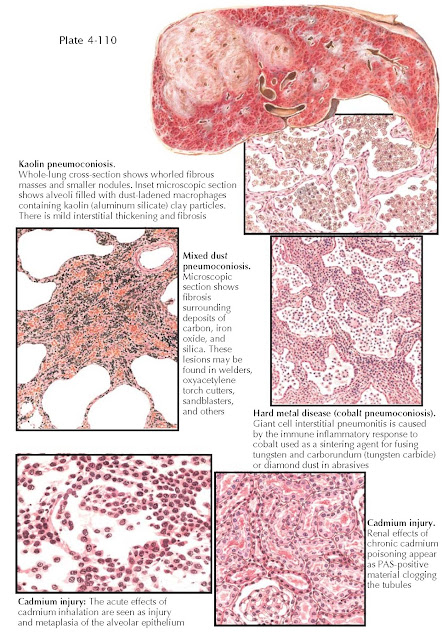 Mixtures of various minerals comprise most naturally occurring stone. When stone or earth is excavated, blasted, crushed, or crafted, the airborne dust contains a mixture of crystalline and amorphous minerals that reﬂect the source. If dust exposure is intense or pro- longed, these minerals accumulate in the lungs of exposed workers and may be evident either as a “storage disease” or as overt pulmonary ﬁbrosis. The extent of lung disease depends primarily on the fraction of crystalline free silica present in the mixed dust and the pathogenicity of other silicates (e.g., aluminum silicates, magnesium silicates).

Cobalt exposure is associated with interstitial lung disease and occupational asthma. These diseases occur only in occupational settings, and there is no indication that cobalt metal or cobalt compounds constitute a health risk for the general population. The interstitial lung disease develops only when the exposure to cobalt occurs in association with tungsten carbide (known as “hard metal”) or with diamond dust. This speciﬁc pneumoconiosis is known as “hard metal disease.” Only a small fraction of exposed workers develop the disease, and the mechanisms appear to be immunologic sensitization rather than (or in addition to) direct lung injury. The clinical features of cobalt pneumoconiosis are variable and include a subacute form with rapidly progressive cough, fever, and shortness of breath as well as a more chronic form with gradually progressive respiratory impairment. Chest radiograph patterns vary from patchy inﬁltrates to diffuse small nodular inﬁltrates or reticulonodular opacities. The pathology of cobalt pneumoconiosis is distinctive, and the hallmark features are bizarre giant cells in association with a pattern resembling “usual interstitial pneumonitis” or “desquamative interstitial pneumonitis.” A picture similar to that of hypersensitivity pneumonitis can be seen in the subacute form.

The adverse responses to cobalt in the lung appear to be primarily immunologic but may also involve direct injury or toxicity. Cobalt can be detected in the urine of exposed workers. Cobalt may or may not be detected in lung biopsy specimens of patients with cobalt pneumoconiosis. Cobalt can cause asthma and contact dermatitis associated with IgE antibodies and possibly T-cell–mediated responses against cobalt. The granulomatous “giant cell interstitial pneumonitis” characteristic of hard metal disease includes abundant lymphocytes and macrophages, particularly in the earlier or subacute form.

Cobalt metal is used to sinter, cement, or fuse dis- similar materials when the mixture is heated together. In this application, cobalt is used widely to create “hard metal” coatings on steel tools and parts and abrasives in which tungsten carbide particles or diamond-cobalt particles are applied to disks or wheels for grinding tools. Workers who produce tools or parts coated with hard metal for durability and workers manufacturing tungsten carbide or diamond abrasives are at risk for developing cobalt pneumoconiosis. Individuals who later use these abrasives or who sharpen tools with tungsten carbide tips are also at risk.

Cadmium is an element that occurs as a soft bluish- white metal, usually reﬁned as a byproduct of smelting other metals such as zinc. It is used for pigment (cadmium yellow), batteries, and other chemical applications. The use of cadmium is sharply limited by its high toxicity and carcinogenicity. Workers can inhale cadmium from the smelting and reﬁning of metals, from the air in plants that make cadmium products, or when soldering or welding metal that contains cadmium. Acute exposure to cadmium fumes may cause ﬂulike symptoms, including chills, fever, and muscle aches. More severe exposures can cause tracheobronchitis, pneumonitis, and pulmonary edema. Symptoms of inﬂammation may start hours after the exposure and include cough, dryness and irritation of the nose and throat, headache, dizziness, weakness, fever, chills, and chest pain. Inhaling cadmium-laden dust quickly leads to respiratory tract and kidney injuries that can be fatal.

“Fuller earth” (magnesium oxide, calcium montmorillonite, attapulgite, calcium bentonite) is ﬁne clay used to absorb oils from wool, friction pads, and other materials. Exposure during the mining or milling of Fuller earth may cause the accumulation of large amounts of the clay in the lungs. The mineral may be contaminated with silica, calcite, dolomite, or other materials. The lung disease is likely caused by quartz and other silicates that contaminate the magnesium oxide. 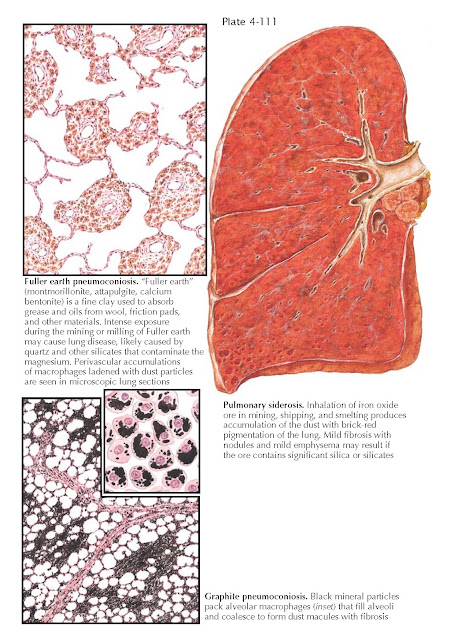 Graphite mineral is pure carbon, a form of highly compressed coal, and is sometimes referred to as meta-anthracite. It is mined from ore deposits and is used for the “lead” in pencils, as a lubricant, and to compose electrodes. Workers exposed to airborne graphite in mining, milling, or manufacturing may accumulate large amounts of the mineral in their lungs. It resides mostly in the macrophages that ingest it and in the regional lymph nodes where they transport it. Although impressive on pathologic examination, it causes little pulmonary dysfunction. Graphite lung disease might be considered a variant of coal worker’s pneumoconiosis caused by a very pure form of coal.

Inhalation of iron ore dust (iron oxide) causes accumulation of the brick-red pigment in the macrophages and lymphatic structures of the lung (i.e., pulmonary siderosis). Workers involved in the surface mining of iron ore, crushing and milling for transport, or smelting the ore into elemental iron for steel manufacture may be exposed to iron dust. The pure iron oxide probably causes little lung injury or ﬁbrosis, but substantial amounts of silica and other silicates may be mixed in the iron ore. These ﬁbrogenic contaminants are prob- ably responsible for the lung disease that may result.