A variety of ﬁbroadenoma growing to immense size and occurring near the menopause was ﬁrst described by the distinguished physiologist of the early 19th century, Johannes Müller, as “cystosarcoma phyllodes.” This is a rare, predominantly benign tumor that occurs almost exclusively in the female breast. It represents less than 1% of all breast tumors. The duration of the growth extends over a period of 6 or 7 years, with rapid growth toward the end of this period, when these tumors can signiﬁcantly increase in size in just a few weeks. The benign character of the growth is indicated by the absence of invasion of the skin or of the regional lymph nodes. The tumors are heavy, massive, lobulated growths with cystic areas. They have a sharply demarcated smooth texture and are typically freely movable. Their average weight is between 7 and 8 lb. In spite of the size, the tumor remains movable and encapsulated, and the nipple is not retracted. Grossly, the tumor displays characteristics of a large malignant sarcoma, takes on a leaf-like appearance when sectioned, and displays epithelial cystic spaces when viewed histologically. Because most of these tumors are benign, the name may be misleading, leading to the preferred terminology of phyllodes tumor or giant myxoma.

The origin of these growths is in a preexisting intra-canalicular myxoma. Dense ﬁbrous tissue in whorls is separated by clefts from polypoid, ﬁbrous, and epithelial masses projecting into cystic cavities. Under the microscope, the predominant component is myxomatous connective tissue with intervening dense ﬁbrous strands. The majority of the growths are benign, but some may be the seat of sarcomatous change in about 10% of cases, particularly when the tumor has existed for many years. These tumors are best treated by simple mastectomy with removal of the pectoralis fascia. Although these benign tumors often do not metastasize, they do have a reputation of growing aggressively and recurring locally. The malignant tumors metastasize hematogenously like other sarcomas. The histologic appearance does not always predict clinical behavior. Roughly 30% of patients with malignant phyllodes tumors will die from their disease. Other than surgery, there is no cure for phyllodes tumors, as chemotherapy and radiation therapy are not effective. Current studies do not support the use of adjuvant radiotherapy for patients with adequately resected disease. 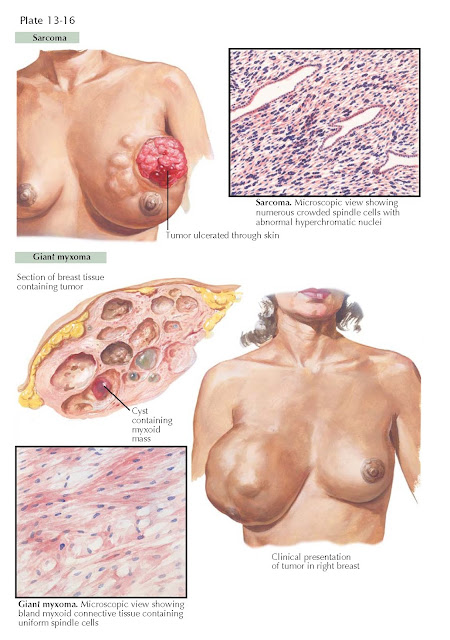 Mammary sarcoma is relatively rare and represents between 1% and 2% of breast tumors. Many varieties of sarcomas, such as osteogenic, lympho-, myo-, lipo-, and myelosarcomas, have been described. In more than half of the cases, however, sarcomas of the mammary gland are of the ﬁbrospindle cell–type arising in the stroma of the breast or from the stroma of preexisting ﬁbroadenomas. The tumors, which may develop at any age but have their peak incidence between 45 and 55 years of age, are characterized by rapid growth, large size, and a ﬁrm consistency. Ulceration of the skin, with fungation, may occur. The tremendous size and the absence of axillary node involvement distinguish these growths from mammary carcinomas. Pain and rapid growth are the symptoms most commonly noted. A preexisting ﬁbroadenoma may have been stationary and asymptomatic for many years and then suddenly may become painful, giving rise to the rapidly growing and invading sarcoma.

Sarcomatous change has also been seen in benign myxomas. Grossly, the tumors are solid, ﬂeshy growths, which may invade the pectoralis fascia. Microscopically, they are composed of tightly packed pleomorphic spindle cells. The treatment is radical mastectomy. The lungs are the most common metastatic site, followed by bone, heart, and liver.