Fibroadenomas are the second most common form of breast disease and the most common breast mass. The peak incidence is from 20 through 25 years, with most patients younger than 30 years of age. More rapidly growing tumors may be found during adolescence. The tumors are twice as common in blacks (30% of breast complaints), in patients with high hormone states (adolescence, pregnancy), and in patients receiving unopposed estrogen therapy.

Fibroadenomas are generally discovered as ﬁrm, painless, mobile, rubbery, solitary breast masses that may grow rapidly during adolescence or in high-estrogen states such as pregnancy or estrogen therapy. These tumors are generally discovered incidentally or during breast self-examination and average 2 to 3 cm in diameter, though they may grow as large as 6 to 10 cm. Multiple ﬁbroadenomas are found in 15% to 20% of patients, and they are bilateral in 10% to 20% of patients. 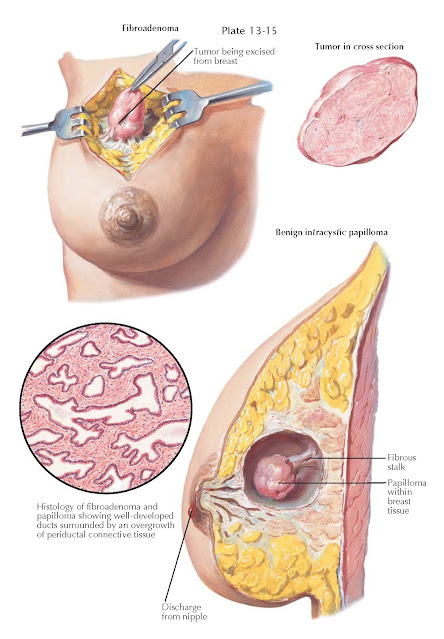 The chief symptom is gradual enlargement of the mass over a period of months or years, the average duration being just under 3 years. On palpation, the tumor is ﬁrm, encapsulated, nodular, and freely movable. Mammography is generally avoided but can be diagnostic if needed. Breast ultrasonography can distinguish between solid and cystic masses, although it is often not required.

The structure of the tumor is lobular. A centrifugal nodule with sharply circumscribed, ﬂeshy, and homogeneous character, usually spherical or ovoid in shape, characterizes them. Pink or tan-white ﬁbrous whorls bulge from the surface when cut. Hemorrhagic infarcts are common. Microscopically, well-developed ducts are seen, surrounded by a marked overgrowth of periductal connective tissue. When this connective tissue is pale staining and loose, and the epithelium of the ducts is compressed, the tumor is referred to as an intracanalicular myxoma. When the amounts of ﬁbrous tissue and duct growth are more evenly balanced, the tumor is termed a ﬁbroadenoma.

In early adolescence, in pregnancy, or toward the menopause, when estrogen secretion is increased or dominant, the growth of ﬁbroadenomas is more rapid. These are termed giant mammary myxomas. Malignant change is extremely rare and usually takes the form of ﬁbrosarcoma occurring in the giant myxoma. After menopause, ﬁbroadenomas tend to regress and become hyalinized but may remain unchanged or grow with estrogen replacement therapy. The treatment is simple excision, which conﬁrms the diagnosis and sufﬁces for the cure.

Benign intracystic papillomas are soft epithelial growths occurring within a mammary duct or cystic acinar structure. They are about one-half as common as ﬁbroadenomas and are usually found at or near the menopause, in the central zone of the breast. The duration of symptoms is variable, usually from 6 months to 5 years. The symptoms consist of either a sanguineous discharge from the nipple (in 50% of the cases) or a lump associated with moderate tenderness. The tumors are rarely of large size; they range in diameter from 1 to several centimeters. The larger ones are associated with either retained bloody ﬂuid within the cyst or malignant change, which occurs in about 10% of the cases. Multiple papillomas in one or both breasts are found in 14% of the cases. On palpation, the benign papilloma is freely movable, soft, and either tense (cystic) or ﬂuctuant.

Grossly, intracystic papillomas are encapsulated tumors in which epithelial tufts extend within the cavity and are bathed by varying amounts of serous or sanguineous ﬂuid. Smaller papillomas may be found in the neighboring ducts or through the ramiﬁcations of a group of ducts some distance from the main tumor. Microscopically, the arborescent epithelial outgrowths rest upon a ﬁbrous stalk with an intact basement membrane. The treatment is simple excision, examination of the neighboring ducts for secondary papillomas, and excision of these where indicated. Recurrent tumors in elderly patients warrant simple mastectomy.