Cystic breast masses are frequently encountered in the clinical care of women. Sorting out those that represent a threat from those that may be followed conservatively is the challenge posed by the presence of cysts in the breasts. Some authors estimate that cysts form in the breasts of roughly 50% of women during their reproductive years. Roughly one in four women seek medical attention for some form of breast problem; often this takes the form of a palpable mass. The most common cause of a palpable breast cyst is ﬁbrocystic change (found in 60% to 75% of all women). Dilation of ducts and complications of breastfeeding (galactoceles, abscess) may also cause cysts.

The pathogenesis is not clear for the most common types of cyst formation. Cyclic changes in hormones induce stromal and epithelial changes that may lead to ﬁbrosis and cyst formation. Cysts may be single or be found in clusters, with some up to 4 cm in diameter. Small cysts have a ﬁrm character and are ﬁlled with clear ﬂuid, giving the cyst a bluish cast. Larger cysts may have a brown color resulting from hemorrhage into the cyst. Inspissated secretions or milk may form a cystic dilation of ducts (galactocele, ductal ectasia) that may be palpable as a cystic mass. Variable degrees of ﬁbrosis and inﬂammation may be seen in the surrounding stroma. (Leakage of cyst ﬂuid into the surrounding tissue induces an inﬂammatory response that may alter physical ﬁndings and imitate cancer.) The microscopic ﬁndings associated with breast cysts depend on the pathophysiologic changes involved. 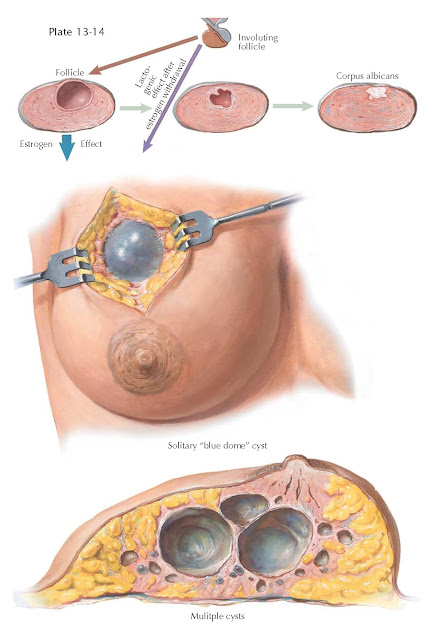 In ﬁbrocystic change, the cyst makes its appearance abruptly in a previously normal breast in which the parenchyma has been largely replaced by fat and is accompanied by a sticking or stinging sensation. A serous discharge from the nipple occurs in about 6% of the patients. On palpation a tense, movable, rounded mass is felt ﬂuctuating between the ﬁngertips of the right and left hands if the two hands alternately compress the mass. On transillumination, both the breasts and the tumor transmit the light readily.  The cyst usually occupies a region midway between the nipple and the periphery of the breast.

On gross examination (when the cyst is exposed at operation), it has a characteristic blue dome that bulges into the subcutaneous fat. This cyst has a thin, ﬁbrous wall, which may have an epithelial lining of duct cells resembling sweat gland epithelium. On opening the cyst, a smoky or cloudy straw-colored ﬂuid is evacuated. Microscopically, the cyst wall is embedded in dense, ﬁbrous mammary stroma. The gland is poor in acinar tissue.

The diagnosis and management of cystic masses in the breast are based on history, physical examination, and aspiration, with the occasional adjunctive use of mammography and ultrasonography. (Ultrasonography is useful in differentiating solid and cystic breast masses, but it has limited spatial resolution and cannot be used to differentiate benign and malignant tissues.) Needle aspiration with a 22- to 25-gauge needle may be both diagnostic and therapeutic. If the cyst disappears completely and does not reform by a 1-month follow-up examination, no further therapy is required. Fluid aspirated from patients with ﬁbrocystic changes is customarily straw colored. Fluid that is dark brown or green occurs in cysts that have been present for a long time but is also innocuous. Bloody ﬂuid requires further evaluation. Cytologic evaluation of the ﬂuid obtained is of little value because of unacceptably high falsepositive and false-negative results. After aspiration of a cyst, the patient should be rechecked in 2 to 4 weeks. Lack of complete resolution at the time of aspiration, recurrence of the cyst, or the presence of a palpable mass should prompt additional evaluation, such as ﬁne-needle aspiration (FNA) or open biopsy.