Stromal and ductal proliferation that results in cyst formation, diffuse thickening, cyclic pain, and tenderness are the hallmarks of ﬁbrocystic change. The term ﬁbrocystic change encompasses a multitude of different processes and older terms, including ﬁbrocystic disease. It is the most common of all benign breast conditions, accounting for its linguistic demotion to change from the designation disease. To one extent or another, ﬁbrocystic change affects 60% to 75% of all women. These changes are most common between the ages of 30 and 50 years, with only 10% of cases in women younger than 21 years. Methylxanthine intake has been proposed as a causative agent, but hard data are lacking. There is no evidence that oral contraceptives increase the risk of these changes. A family history of ﬁbrocystic change is often present, but causality is difﬁcult to establish.

The cause or causes of ﬁbrocystic change are unknown, but it is postulated to arise from an exaggerated parenchymal response to hormones. A role for progesterone has been suggested based on the common occurrence of premenstrual breast swelling and tenderness. Other proposed sources for ﬁbrocystic changes are altered ratios of estrogen and progesterone or an increased rate of prolactin secretion, but none of these has been conclusively established. 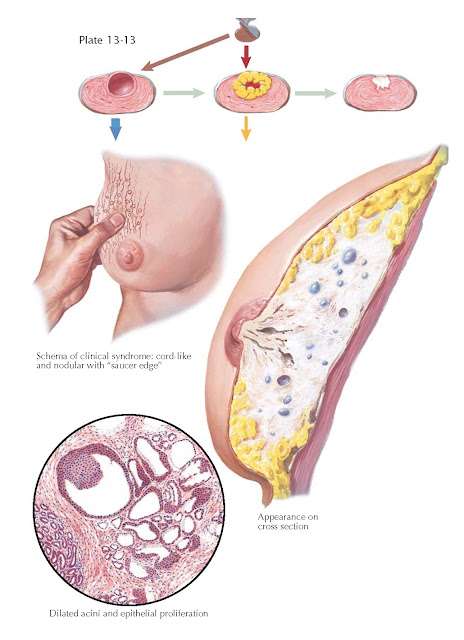 Adenosis is characterized by the occurrence in one or both breasts of multiple nodules varying from 1 mm to 1 cm in size, usually distributed about the periphery of the upper or outer hemisphere. The breasts affected tend to be small, dense, and edged like a saucer when grasped in the hand. Typical ﬁndings on physical examination include multiple cysts and nodules intermixed with scattered bilateral nodularity, or a ropy thickening, especially in the upper outer quadrants of the breast. Pain and tenderness (which vary during the menstrual cycle) occur as in mastodynia, with the worst symptoms occurring just before menses. (The pain associated with ﬁbrocystic change often radiates to the shoulders or upper arms.) Although pain is the most common com- plaint, up to 50% of cases of ﬁbrocystic adenosis may be asymptomatic.

Fibrocystic changes appear in three steps: (1) proliferation of stroma, especially in the upper outer quadrants; (2) proliferation of the ducts and alveolar cells occurs, adenosis ensues, and cysts are formed; and (3) larger cysts are found and pain generally decreases. Proliferative changes may be extensive (although usually benign) in any of the involved tissues. Overall, the mammary tissue affected contains dense ﬁbrous tissue, numerous minute cysts, and foci of epithelial proliferation. Lobule formation is much distorted. Some of the terminal tubules form solid plugs of basal cells, which, on cross section, appear as duct adenomas. Other tubules lead to greatly enlarged lobular structures, which are penetrated by dense strands of ﬁbrous tissue giving the appearance of ﬁbrosing adenoma. Dif-ferential diagnosis of adenosis from ﬁbrosing adenoma is sometimes difﬁcult, if not impossible, particularly if small, intraductal papillomas have developed in advanced cases of adenosis. Premenopausal age, multiplicity of more peripherally situated nodules, a brownish rather than a sanguineous discharge from the nipple, and the involvement of both sides of the breast favor adenosis.

Mammography may be used to assist with the diagnosis or to provide a baseline, but it is not necessary for diagnosis. Mammography is more difﬁcult in younger women who predominantly have these complaints. As a result, ultrasonography may be of more help when imaging is deemed necessary. If the patient has a cystic breast mass, needle aspiration with a 22- to 25-gauge needle may be both diagnostic and therapeutic. Fine needle aspiration or core biopsy may be required if malignancy is suspected. When atypia is found in hyperplastic ducts or apocrine cells, there is a ﬁvefold increase in the risk of development of carcinoma in the future.