Fibrocystic change (previously called ﬁbrocystic disease) is a nonspeciﬁc term that includes mastalgia (mastodynia), breast cysts, and nondescript lumpiness. These may occur in isolation or together. The breasts generally have a nodular and dense texture and are tender when palpated. Fibrocystic change is responsible for the most commonly reported breast symptoms.

Mastalgia is the nonspeciﬁc term used for breast pain of any etiology. Mammary pain may occur in obese, pendulous breasts at or after the menopause when the weight of the breast stretches the suspensory ligaments and puts traction on the nerve ﬁbers. These cases are not true mastodynia and are relieved by a supportive brassiere and by weight reduction. Another form of mammary pain, which does not arise in the parenchyma, is due to intercostal neuralgia, which may complicate spondylitis, fatigue, or respiratory infections. 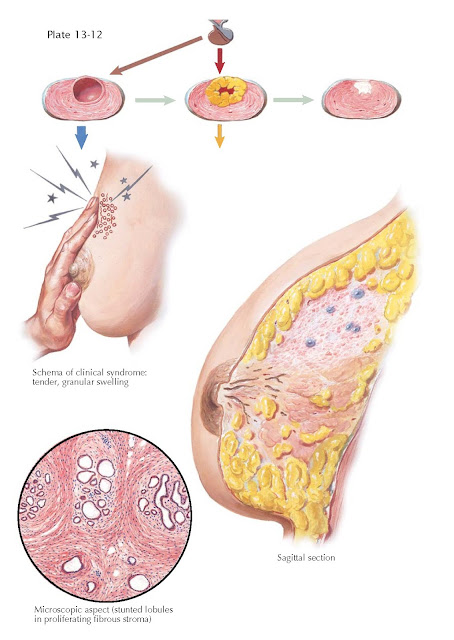 Most women experience breast pain at some point in their lives, but in most cases it is transient. The most common cause of persistent breast pain is ﬁbrocystic change. Breast pain can also arise from rapid hormonal change (especially a change that involves a rise in estro- gen levels, such as starting birth control pills, hormone replacement, or pregnancy). In the absence of obvious pathologic changes, mastalgia has been attributed to caffeine consumption and high-fat diets, but hard data are lacking. Nongynecologic causes include dorsal radiculitis or inﬂammatory changes in the costochondral junction (Tietze syndrome), sclerosing adenosis, chest wall muscle spasms, costochondritis, ﬁbromyalgia, and referred pain. Older patients may also suffer postherpetic neuralgia or neuritis following herpes zoster infections. This pain may mimic mastalgia.

The pain of ﬁbrocystic change, at ﬁrst present only in the premenstruum, becomes progressively more prolonged and more severe until it persists throughout the cycle. The breast affected is usually well developed. A swollen granular zone of increased density is felt, which is located far more frequently in the upper lateral quadrant than in other parts of the hemisphere. On com- pressing this swollen area with the examining ﬁngers, pain is produced. The ﬁbrocystic change is often bilateral. Deﬁnitive masses are generally not felt. Unilateral or localized pain suggests a pathologic process. Mammography may be indicated for other reasons but seldom directly assists in the evaluation of mastalgia.

When biopsied, the painful breast tissue is found to be more dense and ﬁbrous than normal. The lobular tissue stands out as small pink dots in the dense white stroma, which encloses occasional small cyst formations. On microscopic examination, the lobules are stunted or irregular, with minute cystic dilatations. Proliferating immature connective tissue, which stains poorly, surrounds the epithelial structures.

Mastodynia usually responds to medical therapy and to reassurance against the fear of cancer. General measures include analgesics, mechanical support (a well-ﬁtting brassiere worn day and night), local heat, and reassurance. A reduction in methylxanthine intake is often beneﬁcial. Premenstrual restriction of salt or ﬂuids is recommended for selected patients. The role of vitamins A and E is unknown. Evening primrose and chasteberry have shown efﬁcacy in limited trials but standardization of both therapy and active ingredients in varying preparations limits the ability to fully evaluate these as therapeutic options.

Combination oral contraceptives improve symptoms for between 70% and 90% of patients. In moreresistant cases, treatment with spironolactone, danazol sodium (begun during menstruation or once pregnancy has been ruled out), or bromocriptine may be required.

In very selective patients gonadotropin-releasing hormone agonists may be required. Diuretics must be used with care to avoid ﬂuid and electrolyte disturbances. Bromocriptine may cause hypotension during the ﬁrst several days of therapy. Care should also be exercised with patients who have compromised hepatic or renal function.

Whatever therapy is used, it remains essential to consider the possibility of cancer in all cases.