Carcinoma of the male breast is a rare disease and represents only about 0.1% of all-site malignancy and is approximately 100 times less common than breast cancer in women, accounting for about 1% of all breast cancers. In the United States, male breast cancer accounts for fewer than 2000 cases per year and fewer than 500 deaths. The mean age at diagnosis is between 60 and 70 years, though men of any age can be affected with the disease. The average duration of symptoms before diagnosis approximates 2 years. This long duration is probably explained by the disregard of this rudimentary organ by the male adult and by the examining physician. Predisposing risk factors are thought to include radiation exposure, estrogen administration, and diseases associated with hyperestrogenism, such as cirrhosis or Klinefelter syndrome. An increased risk of male breast cancer has been reported in families, with an increased incidence seen in men who have a number of female relatives with breast cancer and those in whom a BRCA2 mutation on chromosome 13q is present. When there is a mutation in this gene, it confers a 5% to 10% lifetime risk for male breast cancer.

Because of the small amount of fatty stroma and glandular tissue in the male breast, ulceration of the skin or involvement of the nipple is an almost regular symptom of onset. Pain and trauma are often given as the reasons for consulting the doctor. The tumor is hard, irregular, and ﬁrmly attached to the overlying and underlying structures. Ulceration is common. The axillary lymph nodes are usually enlarged. 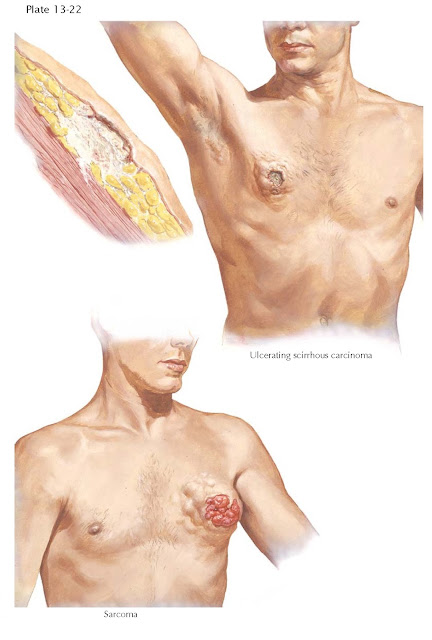 Differential diagnosis from gynecomastia can be made with fair certainty, taking the age of the patient into account. Nodular tumors in the middle-aged man should be excised and examined histologically. Even though a ﬁbroadenoma, an intracystic papilloma, a lipoma or a benign epidermoid cyst usually leaves the skin over the nodule freely movable in contrast to carcinoma, and though these nodules are also softer than cancer, it is not recommended to exclude a malignant growth based only on these clinical signs.

On cross section, the neoplasm is ﬁrm, white, and inﬁltrating. A higher percentage of these growths are low-grade adenocarcinomas, probably arising in the developmental anomalies of the sweat glands or mammary epithelial structures. Pathologically, most carcinomas of the male breast resemble the inﬁltrating form found in the female breast, with inﬁltrating ductal cancer the most common tumor type. Lobular cancer has been described as well. Inﬂammatory carcinoma and Paget disease of the nipple have also been seen in men, but lobular carcinoma in situ has not. Lymph node involvement and the hematogenous pattern of spread are similar to those found in female breast cancer. The TNM staging system for male breast cancer is identical to the staging system for female breast cancer.

Overall survival is similar to that of women with similar stage breast cancers. The impression that male breast cancer has a worse prognosis may stem from the tendency of these tumors to be diagnosed at a later stage. Prognostic factors such as the size of the lesion and the presence or absence of lymph node involvement correlate well with prognosis. Whether ploidy and number of cells in S phase correlate with survival awaits more deﬁnitive data. Estrogen-receptor and progester- one-receptor status and ER2/neu gene ampliﬁcation are also being evaluated.

Although rare, various types of sarcomas of the male breast have been reported. The majority are either ﬁbrospindle or lymphosarcomas. These are rapidly growing tumors with early attachment to the overlying skin and are highly malignant. Simple mastectomy is employed. If lympho- or liposarcoma is disclosed by histologic examination, postoperative irradiation should be given.