The vulva includes those portions of the female genital tract that are externally visible in the perineal region. The mons veneris, overlying the symphysis pubis, is a fatty prominence, covered by terminal sexual (pubic) hair that functions as a dry lubricant during intercourse. From the mons, two longitudinal folds of skin, the labia majora, extend in elliptical fashion to enclose the vulval cleft. They contain an abundance of adipose tissue, sebaceous glands, and sweat glands and are covered by hair on their upper outer surfaces. The anterior commissure marks their point of union at the mons. Posteriorly, a slightly raised connecting ridge, the posterior commissure or fourchette, joins them. Between the fourchette and the vaginal oriﬁce, a shallow, boat-shaped depression, the fossa navicularis, is evident. The labia minora are thin, ﬁrm, pigmented, redundant folds of skin, which anteriorly split to enclose the clitoris; laterally, they bound the vestibule and diminish gradually as they extend posteriorly. The skin of the labia minora is devoid of hair follicles, poor in sweat glands, and rich in sebaceous glands. The skin of the labium majus, and to a less extent the labium minus, is subject to most of the same dermatologic pathologies as other areas of skin.

The clitoris, a small, cylindrical, erectile organ situated at the lower border of the symphysis is composed of two crura, a body, and a glans. The crura lie deeply, in close apposition to the periosteum of the ischiopubic rami. They join to form the body of the clitoris, which extends downward beneath a loose prepuce to be capped by the acorn-shaped glans. Only the glans of the clitoris is generally visible externally between the two folds formed by the bifurcation of the labia minora. When the clitoris is abnormally enlarged as a result of exposure to excess androgens, the clitoral index (the product of the sagittal and transverse diameters of the glans, in millimeters; normal 35 mm2) is used to grade the degree of enlargement. 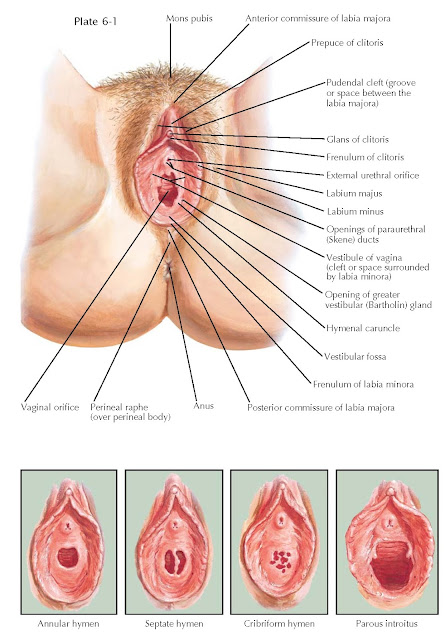 The vestibule becomes apparent on separation of the labia. Within it are found the hymen, the vaginal oriﬁce, the urethral meatus, and the opening of Skene and Bartholin ducts. The external urethral meatus is situated upon a slight papilla-like elevation, 2 cm below the clitoris. In the posterolateral aspect of the urinary oriﬁce, the openings of Skene ducts lie. They run below and parallel to the urethra for a distance of 1 to 1.5 cm. Bartholin ducts are visible on each side of the vestibule, in the groove between the hymen and the labia minora, at about the junction of the middle and posterior thirds of the lateral boundary of the vaginal oriﬁce. Each duct, approximately 1.5 cm in length, passes inward and laterally to the deeply situated vulvovaginal glands. The Bartholin glands are situated posterior to the 3- and 9-o’clock locations, which is important clinically when a Bartholin gland abscess is considered in patients with labial swelling.

The hymen is a thin, vascularized membrane that separates the vagina from the vestibule. It is covered on both sides by stratiﬁed squamous epithelium. As a rule, it shows great variations in thickness and in the size and shape of the hymenal openings (e.g., annular, septate, cribriform, crescentic, ﬁmbriate). After tampon usage, coitus, and childbirth, the shrunken remnants of the hymen are known as carunculae hymenales or hymenal caruncles. The presence or absence of an intact hymen is insufﬁcient to de ermine the presence or absence of past sexual activity.