The superﬁcial fascia of the anterior abdominal wall has been cut away, exposing the aponeurosis of the external oblique muscle, with the linea alba in the midline and the linea semilunaris laterally outlining the rectus compartment beneath. Below are the inguinal ligaments, continuous with the fascia lata of the thighs, and the structures of the perineum superﬁcial to the inferior fascia of the urogenital diaphragm. The fascial layers of the canal of Nuck emerge from the superﬁcial inguinal ring and descend toward the lateral margin of the labium majus. These layers are composed of ﬁbers both from the aponeurosis of the external oblique and from the transversalis fascia. The innermost layer is closely applied to the round ligament, which becomes more attenuated as it descends and eventually terminates by ﬁne, ﬁngerlike attachments in the labium majus. Within this sac is a vestigial remnant of peritoneum, the homologue of the tunica vaginalis in the male. The canal of Nuck may persist in the child or the adult in a patent form and may then give rise to inguinal hernias or the so-called hydrocele feminae. Adjacent to the terminal portion of this process on the right side is Colles fascia, attached laterally to the ischiopubic ramus and inferiorly to the fasciae, covering the superﬁcial transverse perineal muscle, which forms the upper margin of the ischiorectal fossa.

Lateral to the subcutaneous inguinal ring and below the inguinal ligament lies the fossa ovalis surrounding the femoral artery and vein. Close to the fossa are the origins of the inferior epigastric, iliac circumﬂex, and superﬁcial external pudendal vessels. 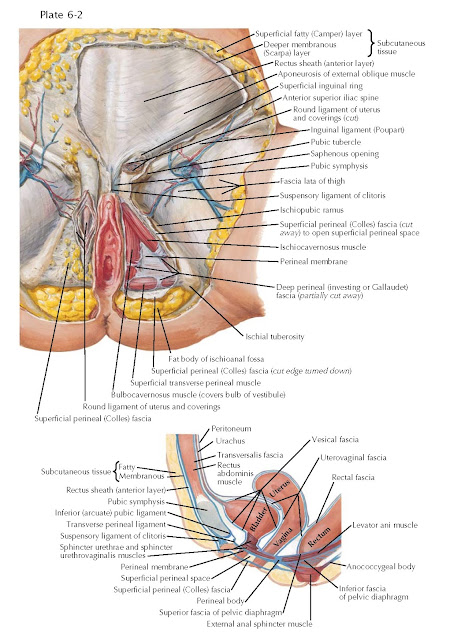 To expose the superﬁcial muscles and inferior fascia of the urogenital diaphragm or triangular ligament, Colles fascia has been cut away on the left side. Closely applied to the left lateral wall of the vagina and lying below the labium majus is the bulbocavernosus muscle, which passes from the central tendinous point of the perineum to be attached in the corpus cavernosum and suspensory ligament of the clitoris. This muscle also is a constrictor of the introitus. At right angles to the bulbocavernosus muscle and similarly attached to the central tendinous point is the superﬁcial transverse perineal muscle, which runs laterally to the tuberosity of the ischium and helps support the midportion of the pelvic ﬂoor. The ischiocavernosus muscle is the hypotenuse of the triangle formed by the bulbocavernosus and the superﬁcial transverse perineal muscles and runs from the tuberosity of the ischium upward to be inserted in the crus of the clitoris, which it covers for most of its length. Within the triangle is the inferior fascia of the urogenital diaphragm, which blends with the deep ﬁbers of Colles fascia. The triangular shape of the whole urogenital diaphragm stands out clearly in this view, with the apex at the symphysis pubis, the ischiopubic rami forming the sides, and the transverse perineal muscles connected by the central tendinous point of the perineum, the base. The external anal sphincter sends interdigitating ﬁbers to join those of the transverse perineal, bulbocavernosus, and pubococcygeus muscles in the central perineum.

The lateral view illustrates the manner in which the muscles and fasciae of the urogenital diaphragm are applied to and support the pelvic viscera. The urogenital fascia is composed of a superior and an inferior layer joining to form a single ligament anterior to the urethra and posterior to the vagina. Elements from these cover the outer surfaces of the pelvic viscera, where they are known as the endopelvic fascia. Composed of smooth muscle as well as ﬁbrous tissue, they are thin superiorly where they lie just beneath the reﬂections of the pelvic peritoneum, but they become thicker as they approach their attachments to the upper fasciae of the urogenital diaphragm and levatorani muscles.