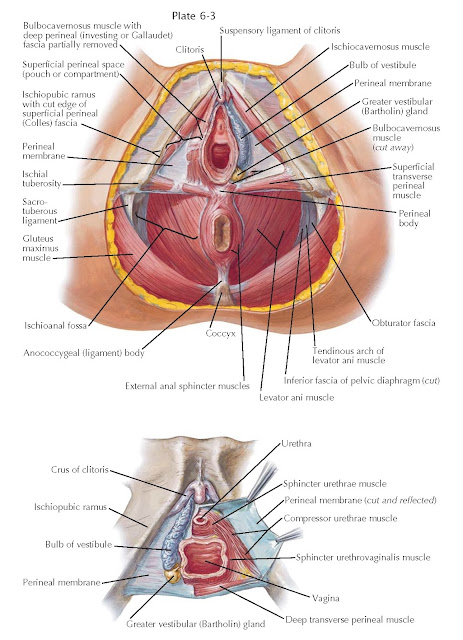 The urogenital diaphragm is a strong, musculomembranous partition stretched across the anterior half of the pelvic outlet between the ischiopubic rami. It is composed of superior and inferior fascial layers between which are located the deep perineal muscles, the sphincter of the membranous urethra, and the pudendal vessels and nerves. It is pierced by the urethra and vagina.

The muscles of the perineum include the bulbocavernosus, the ischiocavernosus, the superﬁcial and deep transverse perineal muscles, the sphincter of the membranous urethra, and the external anal sphincter. These muscles, in general, correspond to their homologues in the male. The ischiocavernosus muscles are smaller than in the male. They overlie and insert into the crura of the clitoris instead of into the crura of the penis, as in the male. The bulbocavernosus muscles surround the oriﬁce of the vagina and cover the vestibular bulbs. They are attached posteriorly to the central tendinous point of the perineum and to the inferior fascia of the urogenital diaphragm and insert anteriorly into the corpora cavernosa clitoris. They are sometimes termed the sphincter vaginae. Spasms in this muscle group are often found in patients with vaginismus. The pair of deep transverse perineal muscles (within the urogenital diaphragm) is interrupted near the midline by the vagina, into which they insert.