A network of lymphatic anastomoses drains the external genitalia, the lower third of the vagina, and the perineum. Bilateral or crossed extension and drainage is common. The superﬁcial femoral nodes are reached through the superﬁcial external pudendal lymphatic vessels, although the superﬁcial external epigastrics may also play a role. From the region of the clitoris, deeper lymphatic vessels may pass direct to the deep femoral nodes, particularly to Cloquet node in the femoral canal, or through the inguinal canal to the external iliac nodes. Cloquet node is thought to be the sentinel node between the superﬁcial and deep inguinal/obturator lymph nodes. Sometimes, intercalated nodes may be encountered in the prepubic area or at the external inguinal ring. The lowermost portion of the vagina, like the vulva, may drain to the femoral nodes. This complex network of lymph nodes is clinically important, for these are the nodes to which cutaneous and vulvovaginal gland malignancies may drain. Regional lymph node dissections are routinely performed in the surgical treatment of vulvar cancer as the status of regional lymph nodes is essential for therapeutic planning and overall prognosis. Superﬁcial nodes in the groin may also become enlarged when signiﬁcant inﬂammation is present in vulvar structures (e.g., Bartholin gland infections). 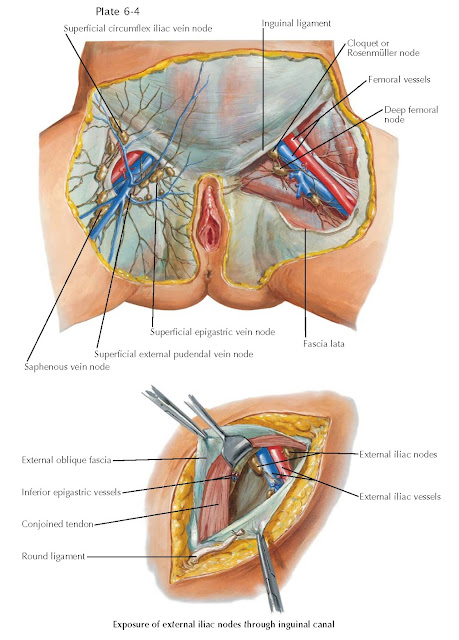 The superﬁcial femoral nodes are a group of nodes found in the loose, fatty connective tissue of the femoral triangle between the superﬁcial and deep fascial layers. These nodes receive lymphatic drainage from the external genitalia of the vulvar region, the gluteal region, and the entire leg, including the foot: The saphenous nodes drain the lower extremities, whereas the superﬁcial circumﬂex nodes drain the posterolateral aspect of the thighs and buttocks.

Afferent vessels from the lower abdominal wall and the upper superﬁcial aspects of the genitalia extend to the superﬁcial epigastric nodes in the abdominal wall above the symphysis. The superﬁcial external pudendal nodes drain the external genitalia, the lower third of the vagina, the perineum, and the perianal region. Efferent lymphatic vessels from all the superﬁcial femoral nodes drain to the more proximal superﬁcial inguinal (femoral) nodes, the deep inguinal (femoral) nodes, and the external iliac nodes. Efferent lymphatics from this group of nodes penetrate the fascia lata to enter the deep femoral nodes and represent the greatest concentration of lymph nodes in the female.

A few constant nodes are usually associated with the deeper lymphatic trunks along the femoral vessels. These may be situated on the mesial aspect of the femoral vein, above and below its junction with the saphenous vein. The highest of the deep femoral nodes lies within the opening of the femoral canal (Cloquet or Rosenmüller node). The deep femoral nodes receive afferent lymphatics directly or indirectly from the parts drained by the superﬁcial femoral lymphatics and send efferent vessels to nodes higher in the chain and to the external iliac nodes.

Knowledge of the lymphatic drainage of the perineum can be helpful in the assessment and treatment of patients with vulvar cancers, where lymphatic mapping and sentinel lymph node biopsy may be applied. The sentinel node(s) are those nodes that directly drain the primary tumor and are thought to predict the metastatic status of the upper nodes in the groin.