During the third week of gestation, the villi at the base of the placenta become ﬁrmly anchored to the decidua basalis. In later weeks the zone of anchoring villi and decidua becomes honeycombed with maternal vessels that communicate with the intervillous space. The spiral arteries in the decidua become less convoluted and their diameter is increased. This increases maternal blood ﬂow to the placenta and decreases resistance. In response to the presence of the trophoblasts, the vascular endothelium is replaced by the trophoblast, and both the trophoblast and an amorphous matrix of ﬁbrin and other constituents replace the internal elastic lamina and smooth muscle of the media. These changes are most marked in the decidual portion of the spiral arteries but extend into the myometrium as the pregnancy advances. The basal arteries are not affected.

The blood-ﬁlled lake in which the chorionic villi are suspended develops from the lacunae in the primitive trophoblast as it invades and opens up the maternal vessels of the decidua. Development of the maternal blood supply to the placenta is thought to be complete by the end of the ﬁrst trimester of pregnancy (approxi-mately 12 to 13 weeks). Abnormalities of this vascular process are found in women with fetal growth restriction and preeclampsia. 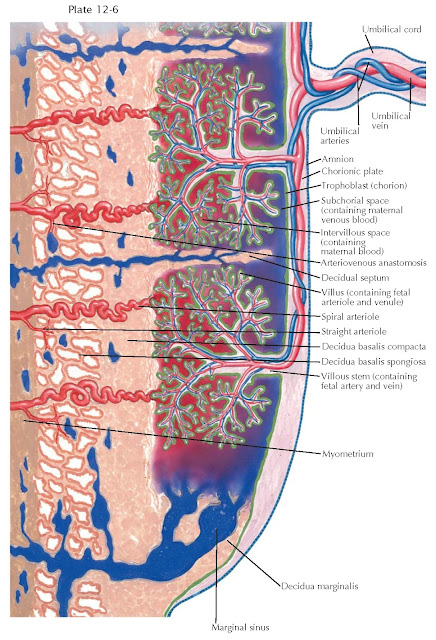 The details of the maternal blood ﬂow through the placenta are not well understood. Observations indicate that the ﬂow is much more rapid than was once believed and that the differences in the quality of blood in various areas of the placenta are quite marked. Currents and other dynamic factors probably cause these differences. The blood is more arterial toward the maternal aspect of the placenta, whereas in the subchorionic space it is venous in character. Although in most placentas the venous drainage is largely through the marginal sinus, part of the venous blood is returned to the uterine veins in the decidua basalis. The branching of the cotyledon stalks between the larger decidual septa divides the placenta to varying degrees into lobules, called cotyledons.

The marginal sinus is a large venous channel that courses beneath or through a gray ring of tissue formed by the membranes and the decidua marginata. It is not uncommon to ﬁnd foci of obliteration, thrombosis, or rupture of the marginal sinus. This region is also the most common site for various retrograde changes in the decidua and contiguous chorionic villi. These lesions have long been considered of little or no clinical importance, though speciﬁc data are lacking.

The placenta is not only an intrauterine organ of respiration, nutrition, and excretion for the growing fetus but is also a powerful endocrine gland in the physiologic economy of both mother and fetus. Within 10 days after fertilization, trophoblastic tissue, probably the Langherans cells, has begun to produce chorionic gonadotropic hormone, and by the end of the second month the placenta is the main source for elaborating estrogen and progesterone. Other hormones include human placental lactogen (also called human chorionic somatomammotropin , insulin-like growth factor, and other growth factors.