DEVELOPMENT OF PLACENTA AND FETAL MEMBRANES

DEVELOPMENT OF PLACENTA AND FETAL MEMBRANES

As the embryo grows, it must establish an efﬁcient means of obtaining nutrients and eliminating waste products. It does this by establishing the placenta, an efﬁcient interface between its vascular system and that of its mother.

Trophoblastic cells have marked invasive capacities and grow into the walls of maternal blood vessels, establishing contact with the maternal bloodstream. In early pregnancy, trophoblastic cells frequently invade deep into the myometrium, but as pregnancy progresses, invasion is limited by profuse proliferation of decidual cells, which conﬁne the trophoblastic invasion to the area just beneath the attachment of the growing placenta. In the rare instances when decidual cells fail to develop, implantation overlies an old scar or there are defects in the development of the ﬁbrinoid layer (Nita-buch layer), invasion of the uterine wall by chorionic villi is extensive. This can result in a placenta accreta, increta, or percreta. 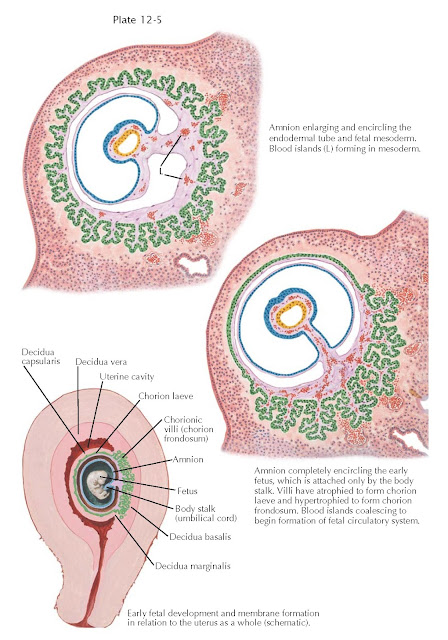 In the recently implanted blastocyst, the rim of trophoblastic cells, with the underlying mesodermic stroma, constitutes the primitive chorion. At the same time, the amnion ﬁrst appears as a small cavitation in the mass of proliferating ectodermal cells in the embryonic area. This cavity gradually enlarges and folds around the developing embryo, so that eventually the latter is suspended by a body stalk (the umbilical cord) in a closed bag of ﬂuid (the amniotic sac).

During the early stage of development of the amnion, another vesicle appears in the embryonic area and for a time is much larger than the amnion. This is the yolk sac (not illustrated), the function of which in mammalian development is not known. As the embryo grows, the yolk sac decreases in size, until at term only a minute remnant can be found near the site of the cord attachment to the chorionic plate.

During the ﬁrst 3 weeks after implantation, a luxuriant growth of the rudimentary villi over the entire blastodermic vesicle occurs, developing into a structure called the chorion frondosum or “leafy chorion.” As the embryo, surrounded by the amnion, grows and protrudes more and more into the uterine cavity, the decidua capsularis and the underlying chorionic villi stretch and become ﬂattened and atrophic. Most of the villi disappear from this region, which is then called the bald chorion or chorion laeve. Meanwhile the villi proliferate markedly in the highly vascular decidua basalis. Here the chorion frondosum persists and becomes a part of the fully developed placenta.

In rare cases the chorionic villi, beneath the decidua capsularis, do not undergo atrophy but establish vascular connections with the decidua vera, opposite the site of implantation, when the enlarging conceptus ﬁlls the uterine cavity. In this condition, called placenta membranacea, the entire chorion is covered with villi, and the thin placenta thus formed bleeds freely, does not separate spontaneously, and is difﬁcult to remove manually during the third stage of labor.

The chorionic villi contain no blood vessels during the ﬁrst 2 weeks of gestation, and the embryo has not yet developed a circulatory system. Nutrition is chieﬂy by osmosis. Toward the end of the third week, certain cells in the mesodermic stroma differentiate into blood islands, around which vascular walls soon appear. By branching and coalescence of these vessels, the entire chorion becomes vascularized. Meanwhile, a fetal heart and circulatory system have been developing. By the end of the fourth week, connections are made between the vessels of the chorion and those of the fetus, which have grown out through the body stalk, thus establishing a fetal–placental circulation.