DEVELOPMENTAL EVENTS OF THE SECOND TRIMESTER

DEVELOPMENTAL EVENTS OF THE SECOND TRIMESTER

The second trimester (14 to 28 weeks) is a time of growth and reﬁnement of function; all major structures including hands, feet, head, brain, and other organs are present, and they continue to grow and develop. During this trimester, the risk of pregnancy loss dramatically lessens and levels of human chorionic gonadotropin plateau and often decline, easing many of the early adverse symptoms of pregnancy such as breast tenderness and morning sickness, though the enlarging uterus may now precipitate heartburn and constipation. (When a second-trimester pregnancy loss occurs, it is strongly associated with placental inﬂammation, often related to ascending infection and/or acute chorioamnionitis, though it may also occur because of aneuploidy, by thrombophilias, by cervical insufﬁciency, and others.) Any weight loss experienced in the ﬁrst weeks of gestation is regained and further weight is gained to provide stores needed to provide nutrition for the growing fetus. Despite the relative lack of complications during the second trimester, early signs of later problems may ﬁrst appear during this phase of pregnancy.

Although the fetus begins moving during the ﬁrst trimester, it is not until the second trimester that movement of the fetus (“quickening”) is felt. This typically happens around 20 to 24 weeks for ﬁrst pregnancies and as early as 16 to 18 weeks for experienced mothers. Fetal waking and sleeping cycles become established and mimic those of the newborn, with the baby awake for about 6 hours a day. 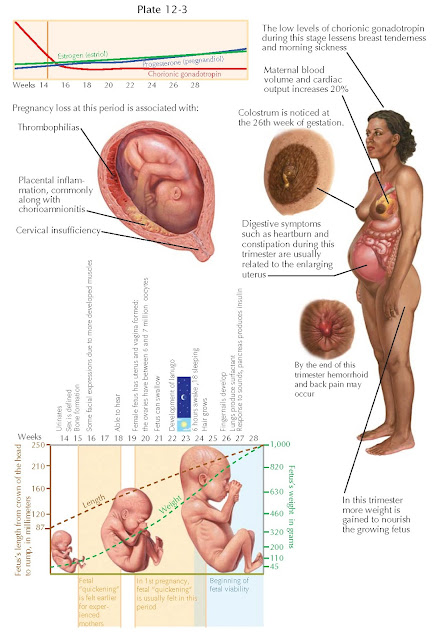 Fetal and maternal changes are frequent during the second trimester: During this period, the fetus changes from a lightweight, weighing about 100 g and measuring 3 in. in length at 14 weeks, to weighing roughly 900 g (2 lb) by the end of the second trimester. By 15 weeks’ gestation, the fetal heart pumps about 23 to 24 L of blood a day. Fetal viability (ability to survive apart from the mother) begins about 24 weeks, though neurologically intact survival at this stage is unlikely. There is an increase in maternal blood volume and cardiac output (20% greater) to feed the needs of the growing pregnancy. Toward the end of this trimester, maternal hemorrhoids and low back pain may make their appearance. Colostrum (the ﬁrst form of breast milk) is present by 26 weeks of gestation. The placenta is fully functional, taking over the role of making estrogen and progesterone that had been performed by the corpus luteum. The fetus is making insulin and urinating, with fetal urine being a signiﬁcant component of amniotic ﬂuid. (The fetus will begin to outweigh the placenta sometime around the 16th week of gestation.) The teeth have formed inside the fetus’s gums, and vernix and meconium make their ﬁrst appearance. By the end of the second trimester, babies hear and respond to external sounds.

By the early portion of the second trimester, the external genitalia have formed sufﬁciently that they can be recognized on ultrasonographic studies, distinguishing the fetus as male or female. It is also at this point that a female fetus will have the most egg cells of any point in her life. Oocytes peak at 6 to 7 million about 16 to 20 weeks’ gestation, declining to about 1 million at birth.

Screening for open neural tube and other defects (via measurement of maternal serum fetoprotein and other markers) is generally performed between 15 and 20 weeks. If a genetic evaluation of the fetus is indicated, an amniocentesis may be performed between the 15th and 20th weeks of gestation. It is generally during the second trimester that ultrasonographic screening for appropriate gestational age, fetal growth, and major fetal malformations is performed.