DEVELOPMENTAL EVENTS OF THE FIRST TRIMESTER

DEVELOPMENTAL EVENTS OF THE FIRST TRIMESTER

The ﬁrst weeks following fertilization represent the most critical period for the success of a pregnancy. A high percentage (as high as 50% to 60%) of fertilized oocytes do not result in pregnancies completing the ﬁrst trimester of gestation. Despite the dramatic changes that the conceptus undergoes in the ﬁrst 14 weeks of gestation, many patients are unaware of their pregnancy or delay seeking prenatal care. Emerging evidence suggests that during this period the foundations of a successful pregnancy and even the future health of the adult individual are set.

For the fertilized egg, zygote, and embryo, a number of events must occur. During the ﬁrst trimester of gestation, the developing embryo implants in the endometrium (except in the case of ectopic pregnancies), the placental attachment to the mother is created, and the major structures and organs of the body are formed. About the 12th week of gestation, the placenta takes over hormonal support for the pregnancy from the corpus luteum. If this transition does not happen smoothly, the pregnancy can be lost. When the serum level of β–human chorionic gonadotropin (β -hCG) is greater than 1500 mIU/mL, the level known as the discriminatory zone, transvaginal ultrasonography should visualize an intrauterine gestational sac in a normal, intrauterine, singleton pregnancy. 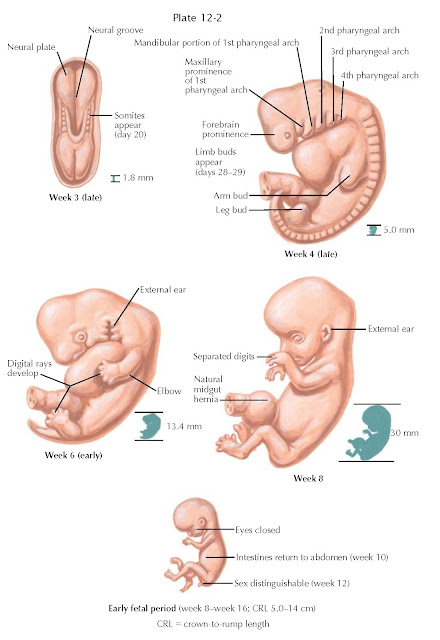 Most patients do not have any speciﬁc signs or symptoms of implantation, although it is not uncommon to experience light bleeding at implantation or cramping during the ﬁrst trimester. Clinical blood and urine tests (β -hCG) can detect pregnancy soon after implantation, which is as early as 6 to 8 days after fertilization. Home urine pregnancy tests normally cannot detect a pregnancy until at least 12 to 15 days after fertilization. Morning sickness occurs in about 70% of all pregnant women and typically improves after the ﬁrst trimester. Some women will experience cramping during their ﬁrst trimester, though this is usually of little concern unless there is bleeding as well. Symptoms of fatigue and breast fullness may occur relatively early in the course of gestation, and abdominal distension begins later in this trimester.

For the ﬁrst 2 months of growth, the conceptus is referred to as an embryo. During this phase, the developing embryo is most sensitive to exposures to toxins, medications, radiation, and the effects of maternal condition that can disrupt the development process. Errors may result in major disruptions in structure or function of the fetus, or the complete loss of the pregnancy. Later exposures to teratogens can result in a constellation of malformations related to the organ systems that are developing at that time; cardiovascular malformations tend to occur early in the embryonic period, genitourinary abnormalities tend to result from later exposures.

Embryonic development is said to be complete when the embryo attains a crown-to-rump length of 30 mm (start of the fetal stage), corresponding in most cases to day 49 after conception. At the start of the third month of gestation, the risk of miscarriage decreases sharply, all major structures including hands, feet, head, brain, and other organs are present, and they continue to grow and develop. The fetal heart can be seen beating on ultrasonography, and the fetus bends its head and also makes general and startle movements. The gender of the individual may be seen as early as the 12th week. Brainstem activity has been detected as early as 54 days after conception, and the ﬁrst measurable signs of brain electroencephalographic activity occur in the 12th week of gestation. If a genetic evaluation of the fetus is indicated, chorionic villus sampling may be performed between the 10th and 12th week of gestation or a niocentesis may be done between 15 and 20 weeks.