IMPLANTATION AND EARLY DEVELOPMENT OF OVUM

IMPLANTATION AND EARLY DEVELOPMENT OF OVUM

Fertilization of the human ovum usually occurs in the ampullary portion of the oviduct, although in rare instances it may take place elsewhere in the genital tract or even in the ovary. Soon after the spermatozoon enters the ovum, the male and female pronuclei fuse to form the segmentation nucleus, which rapidly divides and redivides. Segmentation, thus initiated, continues until the original fertilized ovum is transformed into a mass of cells called the morula.

At this early stage, two types of cells can be distinguished; some proliferate more rapidly, forming a sphere that encloses the aggregate of more slowly dividing cells. A semiﬂuid substance is excreted from the outer cells and is collected in a cavity, which forms simultaneously. The sphere-shaped structure is called the blastodermic vesicle or blastocyst. One layer of ectodermal cells, the primitive trophoblast, covers it except at one pole where the rapidly dividing cells have formed the “inner cell mass,” which constitutes the beginning of the embryo. 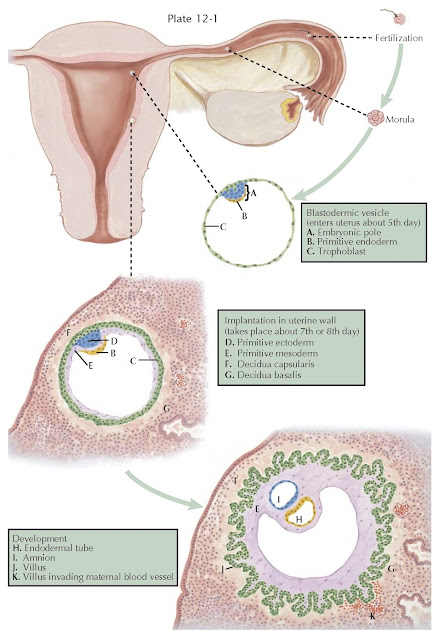 While these changes take place, the ovum continues its passage into the uterine cavity, where it becomes implanted on the seventh or eighth day after ovulation. Various conditions may slow or obstruct the passage and cause nidation elsewhere, resulting in an ectopic pregnancy.

During the menstrual cycle, the ovarian hormones, estrogen and progesterone, act upon the endometrium, producing the premenstrual mucosa, which is sloughed or cast off during menstruation but remains when fertilization occurs. The pregravid endometrium gradually undergoes further changes to become the early decidua to which the blastocyst rapidly adheres once it has reached the uterus.

During the period of migration and implantation of the blastocyst, marked cellular proliferation has been taking place in the embryonic area. Three types of cells can be differentiated within the “inner cell mass.” These constitute the three primary germ layers, the ectoderm, endoderm, and mesoderm.

From the ectoderm will derive the central nervous system, the epidermis, and certain skin appendages.

The endoderm will furnish the epithelial linings and the glands of the gastroenteric and respiratory tracts. The mesoderm will give rise to the epithelium of the urinary and genital systems, the linings of the serous cavities, the various supporting tissues of the body, the blood, and the cardiovascular system.

After implantation, mesodermic cells grow out beneath the primitive trophoblast, which, by proliferation, forms villous projections into the surrounding decidua. Each villus consists of a mesodermic core covered by two layers of trophoblastic cells. The outer cells have dark-staining nuclei and indeﬁnite cell out-lines. They are called syncytial trophoblasts. The more distinct cells of the inner layer are designated cytotrophoblasts or Langherans cells. These decrease in number as pregnancy progresses and are difﬁcult to ﬁnd after the third month of gestation.