Leprosy is a chronic multi system disease with cutaneous findings that is caused by the bacteria, Mycobacterium leprae. It also goes by the name Hansen’s disease. Gerhard Hansen was the Norwegian physician who first described M. leprae as the cause of leprosy in 1873. Leprosy is most prevalent in regions of Africa, South-east Asia, and South America, and it can be seen in isolated regions of North America.

Clinical Findings: Cutaneous findings often begin as a solitary hypopigmented macule. The area of involvement often has a loss of sensation and temperature discrimination. This initial phase has been termed indeterminate leprosy. At this point, it is unknown what type of overall immune response the host will mount. After a period of time, if the host’s cell-mediated immune response is able to keep the bacteria in check, the patient develops tuberculoid leprosy or paucibacillary leprosy. Tuberculoid leprosy manifests with one to three patches or plaques. The border tends to be raised, with a central depression. Adnexal structures, such as hair, are lost, and the lesions are often hypopigmented. This form of leprosy tends to affect the peripheral nerves (e.g., median nerve, ulnar nerve). Palpation of the involved nerve demonstrates enlargement and irregularly spaced nodules. Nerve involvement leads to impairment of the innervated skin and muscle. 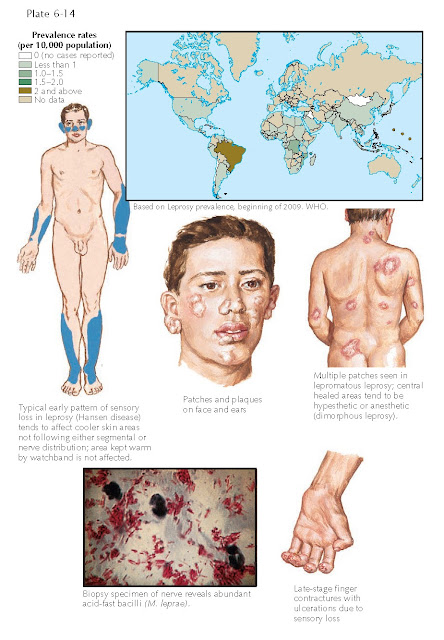 Those patients who do not mount a strong cell-mediated immune reaction develop lepromatous leprosy or multibacillary leprosy. Up to hundreds of hypopigmented patches and plaques may be present. Hair loss may occur in the affected skin and along the eyelashes and eyebrows. This form of leprosy can affect many nerves in a widespread region, leading to neuropathy. There are varying degrees of cell-mediated immune response, and the disease is classified by the Ridley-Jopling system.

Pathogenesis: M. leprae is an acid-fast mycobacterium that is found in environments where the temperature averages approximately 29°C. Most likely, the bacterium is inhaled and subsequently invades the skin and other tissues by hematogenous spread. This bacterium is classified as an obligate intracellular organism. It survives within histiocytes, in which it is protected from host defense systems. Infected individuals with a poor immune response develop lepromatous leprosy, whereas those with an excellent response develop tuberculoid leprosy. Several genes are being evaluated as potential susceptibility markers, because it appears that the organism is not highly contagious. It is estimated that only 5% of those exposed eventually develop disease. This bacterium is highly unusual in that it can infect peripheral nerves. The bacterium expresses a protein, phenolic glycolipid 1 (PGL-1), that has the ability to bind to peripheral nerve cells. This allows initial entry into the host and provides the bacteria with a place to replicate. Many other tissue types can be infected.

Histology: The skin biopsy can be extremely helpful in confirming or making the diagnosis of leprosy. The biopsy findings are highly dependent on the type of leprosy the patient develops. Biopsies of paucibacillary leprosy show a granulomatous infiltrate with few bacteria present. The bacteria can be sparsely located, and the tissue must be stained with a modified acid-fast stain (Fite method) to appreciate the small, red, rod-shaped bacteria. These can be seen only with an oil-immersion objective.

Treatment: Guidelines for the treatment of leprosy have been established by the World Health Organization (WHO), and one should always refer to the most recent information when treating this disease.

Treatment is based on the bacillary load. Paucibacillary disease can be treated with a regimen of rifampin, minocycline, ofloxacin, and dapsone. The treatment schedule varies during the course of therapy, which is 6 months long, and following the protocol is extremely important. Multibacillary disease requires longer therapy and uses a combination of dapsone, clofazimine, and rifampin.