Histoplasmosis is endemic in the Ohio River Valley but exists throughout North America and is also seen in Central and South America. It is a primary pulmonary disease, with the skin being secondarily involved in disseminated disease; however, isolated cutaneous disease can result from direct inoculation. The disease is typically seen in immunocompromised patients. Patients typically breathe in the infective spores, which lodge in the pulmonary tree. Most infections are subclinical.

Clinical Findings: The disease is seen primarily in immunocompromised patients. Other risk factors include occupations that increase the patient’s contact with bat or bird droppings in an endemic region. The fungus is not found within bird droppings, but the droppings provide the perfect environment for the fungus to grow and reproduce. Patients inhale the spores into the lungs. Most have no symptoms. Some have mild flu-like symptoms that go undiagnosed or misdiagnosed as an upper respiratory infection. The primary infection heals, and the lungs may have visible findings on chest radiography. Variable radiographic findings are seen. Small, symmetrically located areas of hilar miliary calcification are the most common finding. Other lung findings can mimic those of tuberculosis, lung cancer, or metastatic cancer. Bilateral hilar adenopathy may be seen, as may lobar pneumonia. 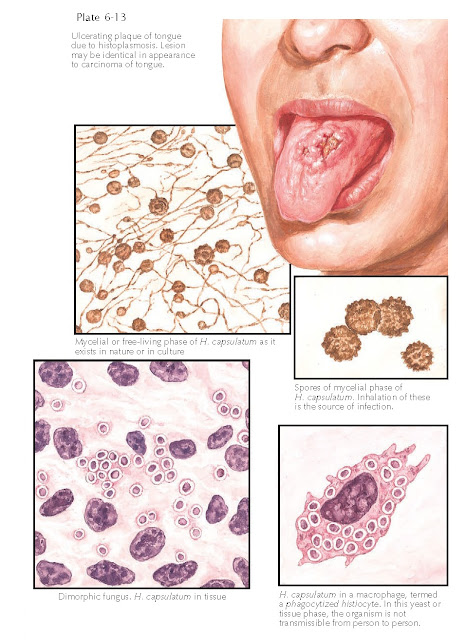 Dissemination of the disease to other organs can occur in the immunocompromised host. The skin is commonly affected in disseminated disease. The skin findings often appear as papules, plaques, or nodules with varying degrees of ulceration. Subcutaneous abscess formation may occur, and fistulas and sinus tract formation may be prominent. Surrounding redness may give the appearance of cellulitis. Adenopathy in the draining lymph nodes is commonly appreciated. The diagnosis is dependent on the histological findings and the culture results.

Histology: Skin biopsy specimens show pseudocarcinomatous hyperplasia of the epidermis with an underlying granulomatous infiltrate. Ulceration and abscess formation are not uncommon with widespread necrosis. The yeast-like organisms can be appreciated in the cytoplasm of histiocytes. This is one of the few infections in which one sees phagocytized histiocytes. The yeast structures are round to oval, and there may be a clear region surrounding the yeast cell. Yeast organisms are also appreciated within the dermis, between and within the inflammatory infiltrate. They can be high- lighted by use of special histology stains such as the periodic acid–Schiff stain or the Grocott silver stain.

The fungus is best cultured on Sabouraud’s media. The fungus in its mycelial phase grows slowly. It appears as a brown, fluffy fungus on culture.

Pathogenesis: Histoplasma capsulatum is a dimorphic fungus that is responsible for a wide range of infections including pulmonary, pericardial, and cutaneous diseases. The fungus is ubiquitous in nature and is found in soil, where it lives as a saprophyte. Spores from the mycelial phase of the fungus are inhaled or inoculated directly into the skin. Once they have entered the body, the change in temperature causes transformation of the spores into the yeast form of H. capsulatum. Most infections go unnoticed, and most of the others induce a subclinical scenario or a mild, flu-like illness. Most cases are self-contained, and the only evidence of disease is the formation of granulomas within the lungs and a positive skin delayed-hypersensitivity test. If a preexposed or newly exposed patient becomes immunosuppressed, the patient is at risk for disease reactivation and serious sequelae.

Treatment: Most cases of primary pulmonary disease go undiagnosed, and the patient’s immune system contains the fungus. In those patients with mild pulmonary symptoms who are not immunocompromised, therapies can be withheld, because most cases resolve spontaneously. Patients who have more severe disease or are immunocompromised should be started on therapy with one of the three most efficacious and best-studied medications: fluconazole, itraconazole, or amphotericin B. Treatment may be prolonged. Patients who are found to have the acquired immunodeficiency syndrome benefit from directed therapy against the human immunodeficiency virus. Patients taking chronic immunosuppressants should have the r medications discontinued or decreased, if possible.