The pathologic diagnosis of Alzheimer disease is determined at autopsy based on the presence of its cardinal histopathologic features, neurofibrillary tangles, and amyloid plaques.

Amyloid plaques are abundant in the cerebral cortex of individuals with Alzheimer disease, particularly in the parietal and frontal regions. Amyloid deposition is also commonly observed in leptomeningeal arteries as amyloid angiopathy. Autopsy studies, and more recently amyloid imaging techniques, have revealed that amyloid plaques begin to accumulate in the brain years, perhaps decades, before the emergence of clinically recognizable symptoms and are found in cortical regions that are highly metabolically active, such as the default-mode network that is active when an individual is at rest and not engaged in a specific cognitive task. Regions such as the precuneus and posterior cingulate, which have strong connections with the hippocampus, are among the areas affected earliest. 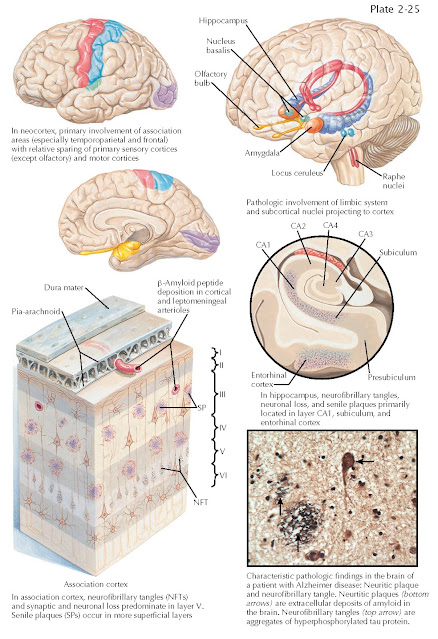 Neurofibrillary tangles (NFTs) accumulate in a predictable fashion as an individual ages and is a ubiquitous accompaniment of aging. Accumulation of neurofibrillary tangles begins in the medial temporal lobe (amygdala and entorhinal cortex) gradually extending into the limbic system (hippocampus and cingulate cortices) and later throughout the entire isocortex. This stereotypic pattern of accumulation is used in pathologic staging of the disease (Braak staging). The pathologic staging of AD is based on the hierarchic pattern of the appearance of neurofibrillary tangles in various regions. There are two “presymptomatic” transentorhinal stages, where NFTs remain in the perirhinal cortex. In stage III, the NFTs involve the limbic regions, and layer II of the entorhinal cortex. Stage IV AD is marked by more extensive NFTs in the limbic regions, entorhinal layer IV, and hippocampal CA1 region. These latter stages (III and IV) correspond clinically to mild cognitive impairment (MCI), not dementia. MCI represents an intermediate stage between normal aging and dementia. Typically, patients note subjective memory problems, the need to make lists, and short-term memory “slip ups,” but these changes are not severe enough to interfere with day-to- day activities. As the pathologic stage of AD progresses, the NFTs accumulate in the inferotemporal, retrosplenial, and, eventually, association regions of the cortex, while the primary motor cortex is spared. In these stages, the clinical hallmarks of AD are present and include impairments in memory, judgment, orientation, language, and decision-making.

Of interest, some tangle pathology is present in all older adults, although individuals with AD have a greater burden of neurofibrillary tangles and a much more widespread distribution throughout the isocortex. The CA1 region of the hippocampus and the entorhinal cortex are particularly susceptible to the accumulation of both plaques and tangles in the early stages of the disease. These regions are important for mediating the formation of memories, and their degeneration accounts for the prominent impairments in short-term memory observed in AD patients.

Biochemical data from patients with AD reveal an early decrease in choline acetyltransferase and acetylcholinesterase, indicating dysfunction in the neural pathways that use acetylcholine as a neurotransmitter. The number of neurons is reduced in the basal nucleus of

Meynert, which has widespread cholinergic neuron innervations through most of the cerebral cortex. Selective degeneration of the basal forebrain cholinergic neurons results in a cholinergic deficit that contributes to AD symptoms. These findings led to the development of the first effective treatments in ameliorating the symptoms of AD, acetylcholinesterase inhibitors, which act by increasing acetylcholine levels in the brain.