The earliest stages of Alzheimer disease are generally marked by cognitive changes in multiple domains of cognition, including memory, executive function, language, and visuospatial function. Of importance, these cognitive changes are often well-compensated, and individuals may still be independent in many activities in the community, and their symptoms may not be readily apparent in casual conversation. Observations from an attentive family member, relative, or friend describing cognitive changes interfering even mildly with the subject’s usual function is a sensitive indicator of the earliest stages of AD.

(1) Memory loss: The clinical hallmark of AD is memory loss. Patients may be forgetful of details of recent conversations and events. Family members frequently report that the patient asks repetitious questions or repeats stories, even in the same conversation. Patients have difficulty remembering appointments, taking their medications, and tend to lose things more than before.

(2)Executive dysfunction: Executive function is loosely defined as an ability to organize information and pursue goals. Subtle problems in executive function are often observed in the early stages as problems in planning and organizing. This may manifest as difficulty in managing a checkbook and the household finances or greater difficulty in following a recipe. Patients have more difficulty making decisions and solving problems and are now more likely to enlist the help of others.

(3)  Decreased language facility: Communication may be less precise than normal and contain more “filler” words and circumlocutory elements. Patients may have difficulty recalling names of people and places although they generally retain the ability to understand and repeat spoken language and do not make paraphasic errors, in contrast to patients with aphasia due to stroke.

(4)  Visuospatial dysfunction: Patients may have navigational problems while driving and in the early stages often self-restrict their driving to the most familiar areas. Ultimately, spatial disorientation interferes with the ability to navigate even in the most familiar areas, such as the patient’s neighborhood.

As the disease relentlessly progresses into the moderate stages, greater cognitive and functional decline reflects more widespread involvement of neocortical regions. Increasing difficulties with instrumental activities of daily living are prominent, such as cooking, cleaning, and dressing. Apraxia, a disorder of skilled movement despite intact strength, sensation, and coordination, develops as typical AD progresses but is not a prominent early feature. This may manifest as greater difficulty in using tools (such as silverware, unlocking a door with a key) and dressing in the proper sequence. Behavioral changes may be prominent. Patients may become increasingly apathetic and less interested in others and in their environment. They also lose interest in reading, television, and social gatherings. Less attention is paid to grooming and attire, and even formerly fastidious people allow their house, room, and belongings to become untidy and disorganized. Occasionally, agitated or belligerent behavior occurs. 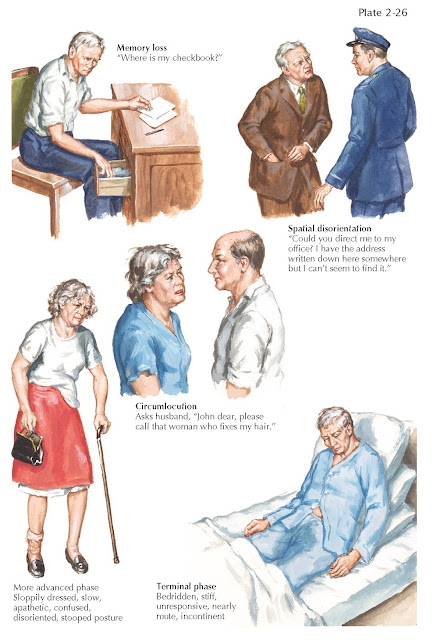 In the advanced stage of AD, patients cannot perform the simple activities of daily living. They remain in bed unless they are helped up and require aid for dressing, eating, and toilet functions. They cannot venture out alone and become lost even in their home. They confuse night and day, and incontinence develops.

The course of the disease is usually from 7 to 12 years. In the terminal phase, patients are bedridden, mute, and stiff, and patients ultimately succumb to medical complications such as pneumonia, urosepsis or decubitus ulcers.