Although in some ways cognitive performance abilities evolve throughout adulthood, many elderly people remain mentally sharp into their ninth and tenth decades. The emergence of uncharacteristic changes in an individual’s cognition that impacts their usual activities should, therefore, trigger an evaluation for possible etiologies.

Because Alzheimer disease is the most common cause of intellectual decline in later life, symptoms or signs that are unusual in Alzheimer disease should particularly alert the physician to a different diagnosis and the possibility of reversing the dementing process. Such features include early age at onset; prominent headache; disturbances of gait or incontinence early in the course of the illness; epileptic seizures; fever; precipitous decline over a period of weeks or months; alteration of consciousness, especially sleepiness, stupor or delirium; history of head trauma; focal neurologic signs, such as lateralized visual, motor, or sensory abnormalities; accompanying dysfunction of peripheral nerves characterized by paresthesias and absent distal reflexes; and known systemic cancer, collagen vascular disease, or endocrinopathy. The presence of any of these features should dictate further evaluation and consideration of the following treatable dementias. 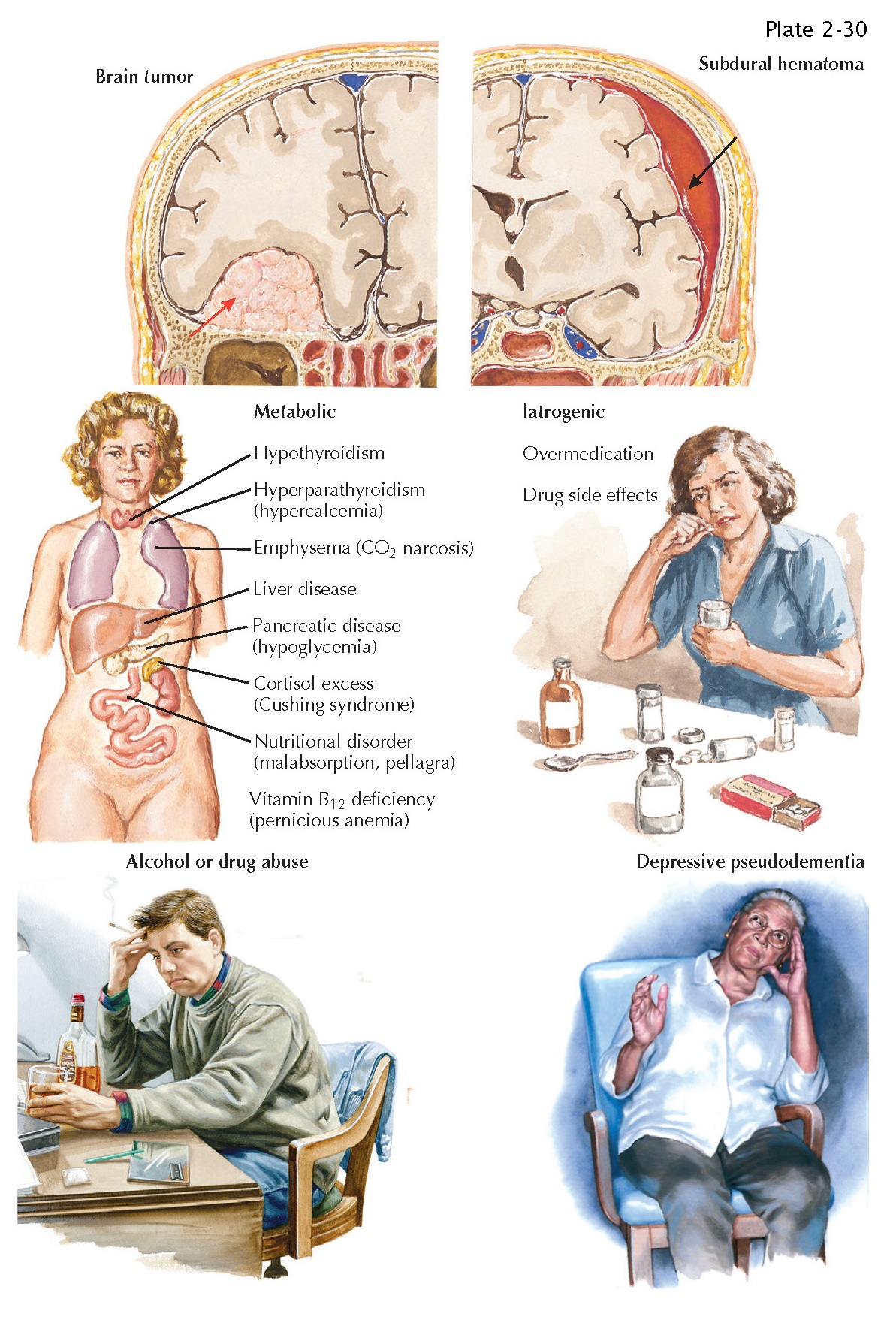 Metabolic Disease with Encephalopathy. When intellectual decline is caused by systemic metabolic disease, there are usually four associated features: diminished alertness; asterixis; a global decrease in mental function, often with a flight of ideas; and variability of intellectual function during the day. The metabolic dysfunction can be either endogenous or exogenous. An endogenous abnormality indicates too much or too little of a substance or metabolite usually found in the body, such as calcium, sodium, thyroid hormone, sugar, and so forth, may be responsible.

Failure of the lungs, kidneys, or liver is also in this category. Exogenous metabolic dysfunction is caused by a deficiency of a dietary substance, such as vitamin B12 or nicotinic acid, or by intoxication with a growing variety of agents, such as alcohol, barbiturates, or narcotics.

Brain Tumors. Primary benign brain tumors, such as meningiomas, that affect the olfactory grooves and frontal lobes decrease mental function by pressing on brain tissue or by obstructing the ventricular system. Malignant primary metastatic tumors can also cause intellectual decline, usually with focal or multifocal signs and seizures.

Head Trauma. A history of head injury, sleepiness, and slight lateralized weakness are clues, particularly to a subdural hematoma. The physician should be aware of this possibility because many patients will have for- gotten the inciting trauma by the time they seek medical attention.

Normal-Pressure Hydrocephalus. In most patients, this occult condition is unrecognized until the pathologic state causes overt symptoms.

Cerebrovascular Disease. Strokes can decimate the regions of the brain that govern thought processes. When this occurs, motor and reflex abnormalities usually parallel or exceed the degree of intellectual decline. Usually, the patient also has a history of an abrupt decline, as well as hypertension and coronary or peripheral vascular disease.

Diagnostic Studies. Screening of biochemical parameters, especially the vitamin B12 level and thyroid, renal, liver, and lung function can be important in evaluating potential causes of dementia. Neuroimaging, electroen-cephalography, and CSF analysis may also detect unsuspected causes of dementia.