Vascular dementia is interesting in that many of those who do have a true vascular dementia are not diagnosed with it, while many who probably do not have a vascular dementia are diagnosed with it. The most straightfor-ward presentations are those in which an individual with normal cognition has a large stroke that causes a combination of cognitive signs, such as aphasia and a memory retrieval problem. If the patient cannot resume their prestroke day-to-day level of function because of these new cognitive deficits, the criteria for vascular dementia are met, but because the stroke so clearly caused the deficits, they are held to simply represent the consequences of a stroke (as opposed to a frank vascular dementia). On the other hand, some patients will present with a gradually progressive dementia, a retention-type memory deficit, no motor signs, no history of sensory or motor changes, and a neuroimaging study that shows subcortical changes that could be consistent with “small vessel cerebrovascular disease.” In the elderly, such patients almost always have the plaques and tangles that are expected in Alzheimer disease. In such cases, despite the neuroimaging changes, it is probably more appropriate to consider Alzheimer disease as the primary etiology. Still, the frequent association between Alzheimer disease and cerebrovascular pathology suggests these conditions may be linked in some way.

Vascular dementias can be subclassified depending on whether the stroke or strokes responsible for the cognitive change are single versus multiple, and large vessel versus small vessel. As mentioned above, a single large vessel stroke can cause a dementia syndrome. Such presentations are often obvious because they typically present within the context of an acute, clearly diagnosable large vessel stroke. Some patients will have multiple large vessel strokes. Greater amounts of stroke-related brain damage commonly associate with greater degrees of cognitive dysfunction. 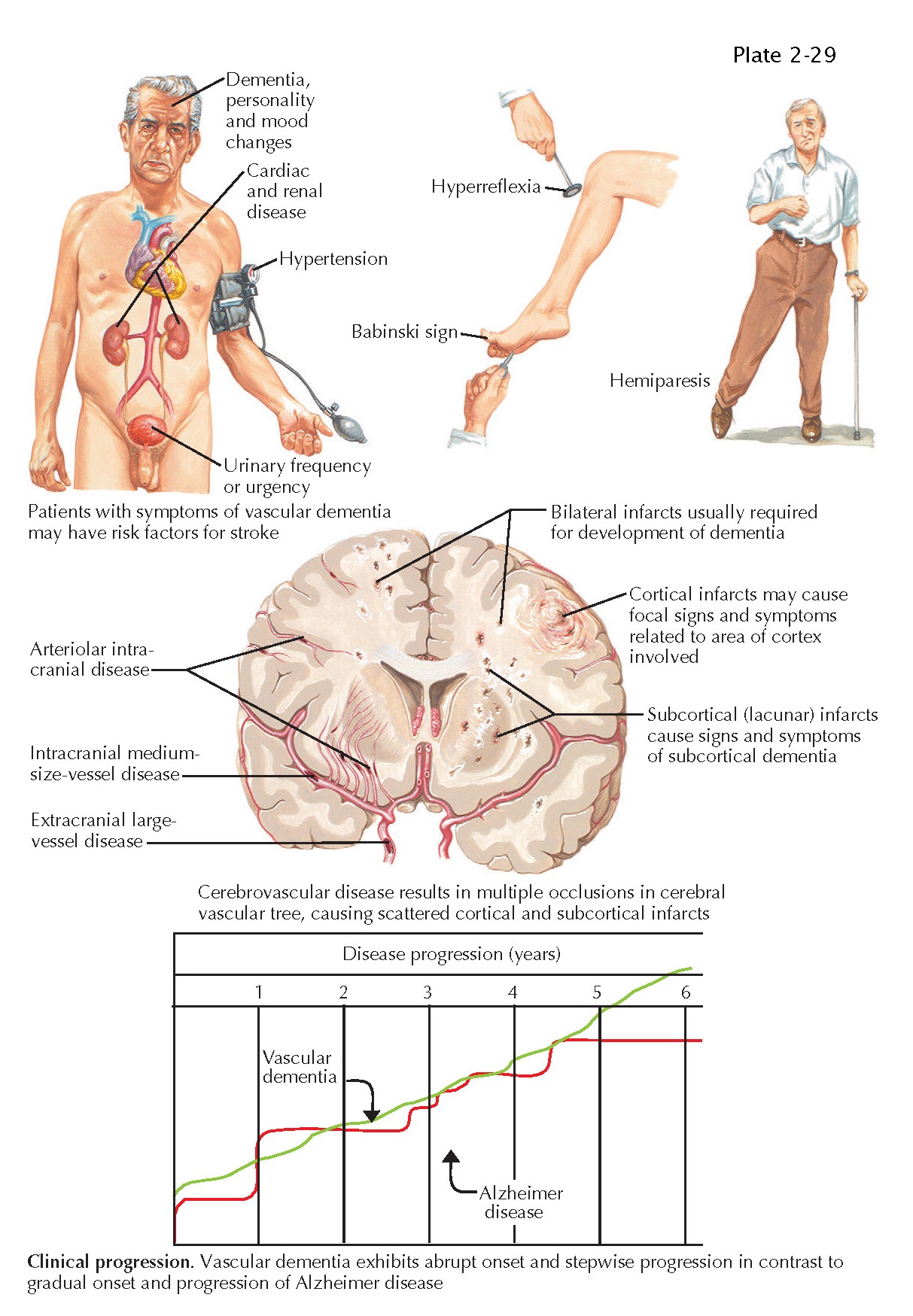 Single small strokes can alter cognition when they happen to fall within and damage specific areas that are critical to cognitive performance. The thalamus, caudate head, and fornix constitute some examples in which a strategically placed small stroke can impact cognition. Cognitive decline severe enough to qualify for a syndromic dementia diagnosis also results from multiple small vessel strokes that, on neuroimaging, appear as multiple lacunar strokes. As is the case with large vessel multi-infarct dementias, this type of small vessel multi-infarct vascular dementia often presents within the context of a stepwise decline in which the stepwise decline occurs in association with diagnosed acute strokes.

When it comes to diagnosing a vascular dementia, the most difficult cases are those in which the patient has developed a clinical dementia, there is no clinical history of a previously diagnosed acute stroke, but a neuroimaging study reveals extensive stroke-induced damage to the brain. In many such instances, the imaging shows extensive changes to the subcortical white matter. These changes may appear confluent or more anatomically restricted. The changes may coalesce around the lateral ventricles and may or may not also separately project into other white matter areas in a more patchy or punctuate pattern. When this white matter change is indeed driving the dementia, then a diagnosis of subcortical ischemic vascular dementia should be considered and a pathologic survey may reveal changes consistent with Binswanger disease. However, nondemented elderly individuals and patients with neurodegenerative dementias may also show similar patterns of subcortical white matter change. In the latter situation, the white matter change may represent a consequence of the true underlying disease as opposed to a cause of the dementia. When considering such cases, the overall clinical picture, including the clinical history, general neurologic exam, and cognitive neurologic exam needs to be synthesized and interpreted very cautiously. Sometimes these patients will ultimately receive a diagnosis of a mixed vascular- degenerative dementia, or “Alzheimer disease plus cerebrovascular disease.”